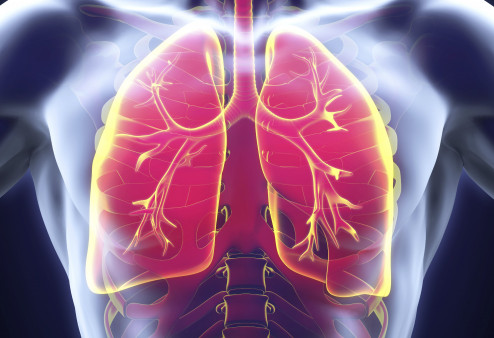 The new targeted therapy was approved for non-small-cell lung cancer with a specific MET mutation.

In the VISION trial, Tepmetko led to complete or partial remission in 43% of metastatic NSCLC patients with this mutation, regardless of whether they had been previously treated or were starting treatment for the first time.

Tepmetko, from EMD Serono, is a kinase inhibitor that inhibits MET, a protein that plays a role in cancer cell growth and spread. Cancer-causing alterations in the MET signaling pathway, including MET exon 14 (METex14) skipping alterations, affect around 4% of people with NSCLC.

“METex14 skipping occurs in approximately 3% to 4% of NSCLC cases, and patients with this aggressive lung cancer are often elderly and face a poor clinical prognosis,” VISION primary investigator Paul Paik, MD, of Memorial Sloan Kettering Cancer Center, said in an EMD Serono press release. “There is a pressing need for targeted treatments that have the potential to generate durable antitumor activity and improve the lives of patients with this challenging disease. Tepmetko offers an important and welcome new therapeutic option for patients with metastatic NSCLC harboring these genetic mutations.”

The trial included 152 adults (median age 73 years) who did not have EGFR or ALK mutations, which can be treated with existing therapies. More than half were men, three quarters were white and half were current or former smokers. They could be new to treatment (n=69) or previously treated (n=83), but they could not have used other MET inhibitors. People with asymptomatic brain metastasis were eligible for the study.

All participants in this open-label trial received oral Tepmetko once daily until they experienced disease progression or unacceptable side effects.

The overall response rate—meaning complete or partial tumor shrinkage–was 43% for both newly treated patients and treatment-experienced patients. The median duration of response was 10.8 months and 11.1 months, respectively. Two thirds of newly treated people and three quarters of treatment-experienced patients responded for six months or longer, falling to 30% and 50%, respectively, at nine months.

Tepmetko is generally safe, but side effects are common. The most frequently reported adverse reactions include swelling, fatigue, nausea, diarrhea, muscle or bone pain and shortness of breath. Laboratory abnormalities may include a white blood cell count, decreased hemoglobin (anemia) and elevated liver enzymes. Less common but more serious side effects may include lung inflammation and liver toxicity. In the VISION study, 45% of patients experienced serious adverse events.

Drugs that receive accelerated approval based on response rates in early studies are expected to undergo further testing in larger randomized trials to confirm their clinical benefits, and the FDA can rescind approval if they don’t measure up.

The Phase II INSIGHT 2 study (NCT03940703) is currently evaluating Tepmetko in combination with Tagrisso (osimertinib) for people with MET amplified advanced or metastatic NSCLC with EGFR mutations that has progressed on Tagrisso alone. The Phase II PERSPECTIVE trial (NCT04515394) is testing Tepmetko in combination with Erbitux (cetuximab) for people with metastatic colorectal cancer who have developed resistance to EGFR inhibitors due to MET amplification.

EMD Serono’s Oncology Navigation Center provides a spectrum of patient access and reimbursement support services, according to the company.

The availability of drugs such as Tepmetko highlights the importance of genetic testing to determine which patients could be eligible for new targeted therapies. Next-generation sequencing of a tumor biopsy or blood sample can reveal actionable genetic alterations.

“In recent years, the treatment of lung cancer has seen powerful progress in the understanding of the genetic mutations that lead to tumor growth, resistance and progression,” Andrea Ferris, president and chief executive officer of LUNGevity, said in the EMD Serono press release. “The availability of a new precision medicine for NSCLC with METex14 skipping alterations advances patient access to targeted treatment and underscores the importance of routine comprehensive biomarker testing for patients with this challenging cancer.”