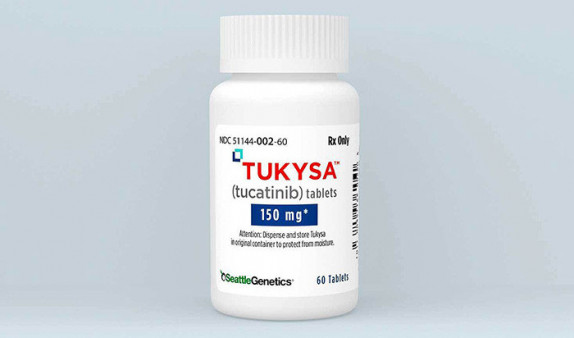 Targeted therapy tucatinib improves survival in people with HER2-positive breast cancer that has spread to the brain.

On April 17, the Food and Drug Administration (FDA) approved Tukysa (tucatinib) as part of a combination regimen for people with previously treated inoperable or metastatic HER2-positive breast cancer, including cancer that has spread to the brain.

“This approval represents an additional targeted treatment option for patients with HER2-positive breast cancer,” Richard Pazdur, MD, director of the FDA’s Oncology Center of Excellence, said in a press release. “The clinical trial supporting this approval enrolled and specifically studied patients with active brain metastases in addition to the overall population enrolled, which also demonstrated benefit in this subgroup.”

Tukysa, from Seattle Genetics, is a tyrosine kinase inhibitor that blocks the HER2 receptor. Around 20% of breast tumors express this receptor at high levels and can be treated with HER2 inhibitors such as Herceptin (trastuzumab), Perjeta (pertuzumab) or Kadcyla (ado-trastuzumab emtansine).

This is the first new drug to be approved by the FDA under an international collaboration known as Project Orbis, which enables concurrent review of experimental cancer therapies in multiple countries. Tukysa is also under consideration in Australia, Canada, Singapore and Switzerland.

The FDA approval was based on promising findings from the Phase II HER2CLIMB trial, presented at the San Antonio Breast Cancer Symposium in December and recently published in The New England Journal of Medicine.

This study included 612 participants, including five men, with HER2-positive inoperable or metastatic breast cancer. The median age was approximately 55. Nearly two thirds had cancer that was also hormone receptor-positive. Almost 40% already had Stage IV cancer at the time of diagnosis. Nearly half had brain metastasis and a similar proportion had cancer that had spread to their lungs and bones.

The study participants were previously treated with Herceptin, Perjeta and Kadcyla. The FDA approved Tukysa for people who have used any one or more of these medications for metastatic breast cancer.

The participants were randomly assigned to receive either Tukysa or a placebo in combination with Herceptin and the chemotherapy drug capecitabine (Xeloda and generics). Tucatinib and capecitabine were taken as a twice-daily pills while Herceptin was administered by IV infusion.

After about a year of follow-up, 33% of participants in the Tukysa group and 12% in the placebo group were still alive without their cancer worsening, known as progression-free survival. This represents a 46% reduction in the risk of disease progression or death. Among participants with brain metastasis, progression-free survival at one year was 25% in the Tukysa group versus 0% in the placebo group, representing a 52% risk reduction.

The overall response rate, meaning complete or partial tumor remission, was 41% in the Tukysa group compared with 23% in the placebo group; 1% in each group had complete responses.

Overall survival at one year was 76% in the Tukysa group and 62% in the placebo group. At two years, the corresponding figures were 45% and 27%, representing a 34% reduction in the risk of death. The median overall survival duration was 21.9 months versus 17.4 months, respectively.

Treatment was generally safe, although side effects were common. The most frequently reported adverse events included diarrhea (81% in the Tukysa group versus 53% in the placebo group), nausea, vomiting and fatigue. More than half of the patients in both groups (63% and 53%, respectively) developed hand-foot syndrome, with redness, swelling and pain on the palms of the hands and soles of the feet—a known side effect of capecitabine. However, few participants in either group stopped treatment prematurely because of adverse events (6% versus 3%).

The prescribing information for Tukysa includes a warning about the potential for severe diarrhea that could lead to dehydration, kidney injury and death. Antidiarrheal medications should be used as indicated, and Tukysa should be interrupted or permanently discontinued based on severity. Liver toxicity is also a possible side effect, and ALT and AST liver enzymes and bilirubin should be monitored before and during treatment. Women who are pregnant or breastfeeding should not use Tukysa.

“With highly significant and clinically important results for overall and progression-free survival, the addition of Tukysa to trastuzumab and capecitabine has the potential to become a standard of care for people with HER2-positive metastatic breast cancer after having received one or more previous anti-HER2 therapies in the metastatic setting,” senior study author Eric Winer, MD, of Dana-Farber Cancer Institute said in a Seattle Genetics press release. “Tukysa is well tolerated by patients and is a valuable addition to the agents we have for HER2-positive metastatic breast cancer.”