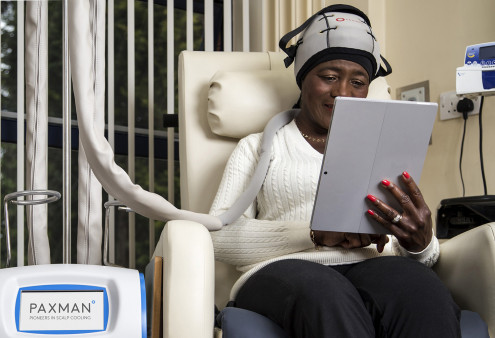 The Food and Drug Administration (FDA) has expanded the indication for the Paxman Scalp Cooling System to include people receiving chemotherapy for any type of solid tumor. The system was previously cleared in April 2017 for women being treated for breast cancer.

Hair loss, or alopecia, can be one of the most distressing side effects of cancer treatment. Traditional chemotherapy works by killing fast-growing cells throughout the body, which includes both cancer cells and rapidly dividing healthy cells, such as those in the hair follicles.

Scalp cooling constricts blood vessels to reduce the amount of chemotherapy reaching the hair follicles and slows the metabolism of follicle cells so they’re less sensitive to the toxic effects of the drugs.

“Scalp cooling has been a real game changer for so many of our patients with breast cancer, minimizing the risk of one of the most dreaded side effects of chemotherapy,” Steven Isakoff, MD, PhD, of Massachusetts General Hospital said in a Paxman press release. “Thanks to the recent expanded FDA indication for the Paxman Scalp Cooling System, so many more patients with solid tumors in the U.S. can now consider this option as a safe and effective way to keep their hair during chemotherapy.”

A recent randomized clinical trial of nearly 200 women being treated for breast cancer showed that half of participants who used the Paxman system had less than 50 percent hair loss, while everyone in the control group that didn’t use scalp cooling lost most of their hair. Women taking taxane drugs, such as paclitaxel (Taxol), were more likely to keep their hair than those using anthracycline drugs, such as doxorubicin.

Paxman, based in Huddersfield, England, uses a refrigeration system to circulate a coolant through tubes in a tight-fitting silicone inner cap, which is covered by an insulating neoprene outer cap. Dignitana AB in Lund, Sweden, makes a similar automated system, the DigniCap, which was cleared in 2015 for women with breast cancer and was granted an expanded indication last year for all solid tumors.

In addition, a number of companies—including Penguin Cold Caps, Arctic Cold Caps, Chemo Cold Caps and Wishcaps—offer manual cooling caps that must be kept in a special freezer or on dry ice and changed every 30 minutes or so as they thaw out during a chemotherapy session.

Hundreds of cancer centers across the United States now have the Paxman or DigniCap automated scalp cooling systems or freezers for manual cooling caps. The Rapunzel Project, a nonprofit started by two breast cancer survivors, maintains a list of centers where scalp cooling is available.

The cost for automated scalp cooling typically ranges from $1,000 to $3,000, depending on how long treatment lasts. The nonprofit HairToStay provides subsidies for scalp cooling, and targeted donor funds provide additional financial assistance for people receiving treatment at specific centers or living in certain regions.

Click here to read a feature on scalp cooling in Cancer Health magazine.