This Food Technology Hopes to Stop a Global Cancer Threat

Aflatoxin, a food-borne chemical, is probably one of the leading causes of cancer in the developing world.

Aflatoxin, a food-borne chemical, is probably one of the single largest causes of cancer in the developing world. But a recent partnership between Microsoft and Bühler, a grain-handling company in Switzerland, may soon stop the global health threat in its tracks — potentially saving millions of lives, Forbes reports.

Global health researchers estimate that aflatoxin, a naturally occurring chemical produced by the fungus , puts around 500 million people around the world at an increased risk of developing cancer. At high doses, the chemical can cause acute poisoning, hepatitis and cognitive stunting in children. It hides in food crops, such as corn, peanuts and tree nuts, particularly when these are damaged by insects or stress from drought or both.

In the United States, consumers typically don’t have to worry about aflatoxin because farmers exercise measures to decrease the risk of a fungal outbreak. However, in developing countries, particularly in Africa, food supplies are often far worse protected, leading to a much higher incidence of cancer.

To help mitigate this threat, Bühler and Microsoft recently came together to develop a system that can process corn at a rate of 15 metric tons per hour while automatically rejecting kernels infected with aflatoxin. The system relies on high-speed imaging technology and LED lights to detect the presence of the fungus and scans every single kernel for a potential infection. This information is then uploaded to Microsoft’s Azure cloud, where it is visualized, tracked and reported in real time. A puff of air then removes the contaminated grain from the supply.

Developers say the new technology can achieve a 90 percent or higher degree of contamination reduction and are now hoping to move it to key areas around the world where aflatoxin-related cancer rates are high.

However, global health experts say the high-tech device shouldn’t be the only solution to address this particular risk in low-income countries. Other strategies include intentionally spreading a strain of the fungus that does not make aflatoxin. Growing insect-resistant GMO maize that can significantly reduce the incidence of infection and “gene-silencing,” which could prevent Aspergillus fungus from producing aflatoxin in the first place, are yet other potential solutions.

Regardless, hope for reducing the impact of yet another preventable cancer around the world is mounting — and that’s reason to celebrate. 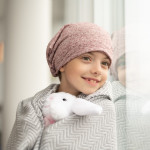 Children’s Cancer Diagnosis Not Tied to Parents’ Rate of Divorce