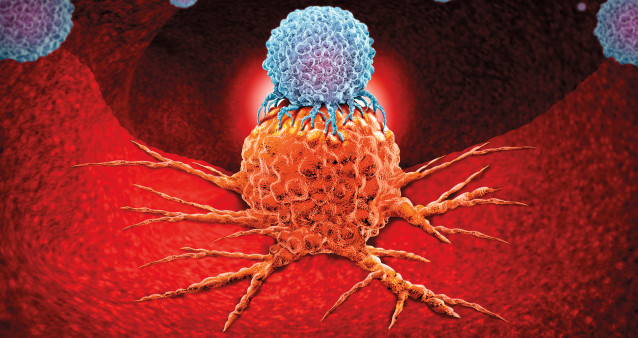 Tecentriq blocks the interaction between the PD-1 checkpoint receptor on T cells, which suppresses immune cell activity, and its binding partner, PD-L1. Blocking this linkage restores T-cell activity. People with higher PD-L1 levels in their tumors tend to do better on these medications, but this isn’t a reliable predictor of individual response. So far, this type of immunotherapy hasn’t shown much activity against so-called cold tumors like those seen in breast cancer, but combining checkpoint blockers with chemotherapy holds greater promise.

The IMpassion130 trial enrolled 902 people with triple-negative breast cancer, meaning it lacks hormone and HER2 receptors that would make it susceptible to other medications.

Among people with PD-L1 positive tumors, the median progression-free survival time was 7.5 months for those assigned to Tecentriq versus 5.0 months for those who received a placebo—a 38 percent reduction in the risk of disease progression or death. A preliminary analysis found that the overall survival time was 25.0 versus 15.5 months, respectively.