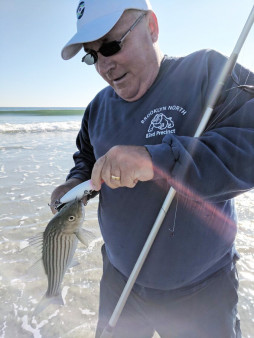 Robert Johnson was treated with a drug combination meant to ‘wake up’ the immune system.

In March 2014, Robert Johnson had already been told he’d run out of options for treatment of his stage IV adenocarcinoma non-small cell lung cancer. But a referral to Dana-Farber Cancer Institute’s Lowe Center for Thoracic Oncology connected him with an early immunotherapy clinical trial that sent him into remission—a remission that’s still holding more than 3 ½ years on.

Johnson’s medical journey started in March 2012, when the 56-year-old Long Island resident was recovering from hip replacement surgery. Searing pain in his right flank sent him to the emergency room, which he thought might be kidney stones. A CAT scan revealed otherwise: His lymph nodes under his ribs were enlarged. A biopsy determined that Johnson had stage 3B adenocarcinoma non-small cell lung cancer.

“I couldn’t believe it,” he says. “I thought, ‘That doesn’t apply to me.’ It was devastating.”

Johnson began a full course of radiation and chemotherapy in New York City. He was hospitalized multiple times for pneumonia, radiation pneumonitis, and pulmonary embolisms.

“You name the side effect, Robert got it,” says his wife, Barbara. “But once he survived those treatments, we hoped for the best.”

For the moment, their hope was short-lived. In May 2013 the cancer not only returned but spread to his neck, elevating Johnson’s cancer to stage IV. He began a “last resort” round of chemo to try to control the cancer’s growth, but it triggered the same cycle of severe side effects he’d suffered previously.

Fearing their time together was short, the Johnsons moved to Hull, Massachusetts to be near their daughter and new grandson, Sully. A month after the move, in December 2013, Johnson developed pneumonia once again and was hospitalized at South Shore Hospital in South Weymouth, Mass.—a facility that happens to be a clinical affiliate of Dana-Farber.

“The oncologist at South Shore said, ‘There’s not much we can do for you here, but let’s see if there is anything that Dana-Farber in Boston can do,” Barbara recalls.

The timing of Johnson’s March 2014 consult with Dana-Farber medical oncologist Geoffrey Oxnard, MD, could not have been more fortuitous. Oxnard was enrolling patients in a clinical trial to test the safety of the immunotherapy drug nivolumab in combination with a newer drug, lirilumab, in advanced non-small cell lung cancer patients. Oxnard explained how the drugs were thought to have the potential to “wake up” the immune system to find and kill cancer cells.

“At this point in time, we didn’t know how immunotherapy was working,” Oxnard says. “We were just starting to get a hint of its efficacy. Robert had tried everything else. He was still in fine shape. He had a supportive family. And he was motivated.”

“The people who are today gaining the benefits of immunotherapy are the very patients who, like Robert, took a gamble on something in a trial early on and had the potential for dramatic results.”

In April, the trial launched with Johnson on board. He received infusions every two weeks and had CAT scans every two months. “He had no side effects whatsoever,” Barbara says. “We kept waiting for the shoe to drop—the nausea, the vomiting, the exhaustion he’d had during chemotherapy—but he experienced none of those. And every single time he had a CAT scan, the tumor kept shrinking. It was getting better and better.”

Johnson’s treatments certainly went smoothly, but it is different for everyone, Oxnard says.

“With immunotherapy, there is potential for dramatic rewards and fewer toxicities,” he explains. “But for some patients, that isn’t the case.”

In December 2014, Johnson hit a significant roadblock: He developed pneumonitis, an inflammation of the lungs that can be a side effect from immunotherapy. After seven months of infusions, Oxnard ended Johnson’s immunotherapy treatment.

“We were happy that Robert was done, but nervous,” Barbara admits. “The immunotherapy had been working so well; would Robert stay healthy once he was off treatment?”

And he has. Nearly every morning, he is out on the water fishing with Sully, now 5 years old.

“It was incredible for him to be able to get back to living instead of preparing to die,” Barbara says. “That is what we are doing every day—living. You don’t give up. Don’t ever give up.”

At Johnson’s most recent CAT scan, which showed no sign of cancer, Oxnard told him he is making history.

“When you are in treatment, you are simply going from scan to scan,” Oxnard says. “Only years later can you realize what you have achieved. You can say, ‘Wow, we eradicated your cancer with a clinical trial.’”

“For his cancer to remain in remission after so many years—we had no idea that was even possible when we started him on the trial. We are learning so much from him. His result is exactly what we are trying to achieve, and it motivates us to continue onward.”

This article was originally published on June 20, 2018, by Dana-Farber Cancer Institute. It is republished with permission.