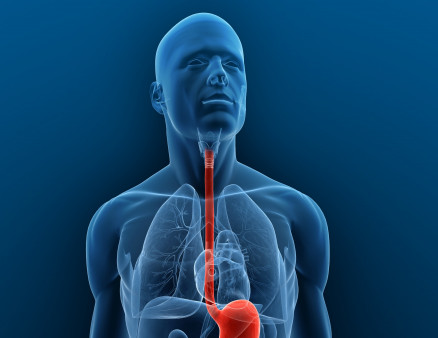 Checkpoint inhibitors are beneficial for some people with cancer of the esophagus, but more work is needed to predict who will benefit, according to studies presented at the 2019 Gastrointestinal Cancers Symposium this week in San Francisco. One trial showed that patients taking Keytruda (pembrolizumab) lived longer than those using chemotherapy—the first study to demonstrate an immunotherapy survival benefit for esophageal cancer.

Cancer of the esophagus (swallowing tube) and gastroesophageal junction (where the esophagus meets the stomach) is often detected late and can be difficult to treat. About 17,600 people in the United States will be diagnosed with esophageal cancer and about 16,000 will die from it this year, according to the American Cancer Society. Although rare in the United States, it is the seventh most common cancer worldwide.

Treatment for esophageal cancer may include surgery, radiation and chemotherapy. Some of these tumors express HER2 receptors, making them susceptible to targeted therapies such as Herceptin (trastuzumab). Immunotherapies help the immune system fight cancer. PD-1 is an immune checkpoint on T cells that plays a role in regulating immune function. Some tumors can hijack PD-1 to turn off immune responses against them. Drugs that block the interaction between PD-1 and its binding partner, known as PD-L1, can release the brakes and restore T-cell anticancer activity.

This Phase III trial included 628 previously treated patients. Nearly 90 percent were men and the median age was about 63. Two thirds had esophageal squamous cell carcinoma and one third had adenocarcinoma. Over 90 percent had cancer that had metastasized, or spread beyond the esophagus. Just over a third had PD-L1 expression on at least 10 percent of their tumor cells; this biomarker has been associated with better response to checkpoint inhibitors.

Participants were randomly assigned to receive Keytruda by IV infusion for up to 35 cycles or chemotherapy using paclitaxel, docetaxel or irinotecan.

Looking at the entire study population, overall survival was the same with Keytruda and chemotherapy (7.1 months in both groups); 32 percent and 24 percent, respectively, were still alive at one year. Among people with squamous cell cancer, those using Keytruda lived about a month longer on average than those using chemotherapy (8.2 versus 7.1 months).

The biggest difference was seen in people with at least 10 percent PD-L1 expression: 9.3 months with Keytruda versus 6.7 months with chemotherapy—a 31 percent reduction in the risk of death. This difference was statistically significant, meaning it probably was not attributable to chance. In this group, 43 percent of Keytruda recipients were alive at one year compared with 20 percent of chemotherapy recipients.

The overall response rate, meaning complete or partial tumor shrinkage, was 13.1 percent with Keytruda versus 6.7 percent with chemotherapy in the full population. Again, a greater benefit was seen in the 10 percent PD-L1 subgroup: 21.5 percent versus 6.1 percent, respectively.

People taking Keytruda had fewer serious side effects than those taking chemotherapy (18.2 percent versus 40.9 percent), but Keytruda recipients were more likely to develop immune-mediated adverse events. In both groups, about 6 percent stopped treatment because of side effects.

These data suggest that Keytruda “should be considered a new standard of care” for second-line treatment of people with metastatic esophageal cancer and PD-L1 levels of at least 10 percent, the researchers concluded.

The significant improvement in overall survival observed with Keytruda in this subgroup “represents an important scientific advancement and has the potential to benefit patients who currently have limited treatment options,” Kojima said in a Merck press release.

Merck said it plans to submit these results to the Food and Drug Administration to consider an expanded indication for Keytruda for esophageal cancer. Another trial, KEYNOTE-590, is currently evaluating Keytruda versus chemotherapy for first-line treatment of advanced cancer of the esophagus.

Much remains to be learned about which factors predict good response to checkpoint immunotherapy.

ATTRACTION-2 showed that Opdivo improved survival compared with placebo in people who did not respond to or could not tolerate standard chemotherapy. Overall survival rates at one year were 27.3 percent versus 11.6 percent, respectively. One-year survival with Opdivo was similar to the 32 percent rate with Keytruda seen in the full population in KEYNOTE-181.

However, nearly half of study participants experienced early disease progression or death. Kang’s team looked for factors that might predict progression versus response, including laboratory abnormalities, prior treatment, alcohol use (a risk factor for esophageal and stomach cancer) and metastasis. They found that people with a low sodium level (a sign of general poor health) and a high neutrophil-to-lymphocyte ratio (an indicator of inflammation) were less likely to benefit from Opdivo.

Tumor biomarkers did not show a clear association with treatment response, but the PD-L1 threshold used in this study was only 1 percent, rather than the 10 percent cutoff used in KEYNOTE-181.

Herceptin stimulates T-cell responses against cancer cells that express the HER2 receptor and increases PD-L1 expression, while PD-1 checkpoint blockers like Keytruda can in turn enhance the activity of Herceptin, Janjigian explained.

In this small Phase II study, previous untreated people with HER2-positive tumors were treated first with Keytruda and Herceptin for one cycle, then added a standard chemotherapy regimen containing capecitabine and oxaliplatin.

Among the 35 total participants, 25 (71 percent) had partial responses, three (9 percent) had complete responses, four (11 percent) had stable disease and three could not be evaluated. No one experienced disease progression. Looking at just the 32 evaluable patients, the overall response rate was 87 percent, Janjigian reported. She noted that about half the patients showed tumor shrinkage after one dose of Keytruda and Herceptin, even before starting the chemotherapy.

The median progression-free survival was about 11 months, according to the study abstract. Although data are not yet mature after just six months of follow-up, Janjigian said the estimated 12-month overall survival rate is 76 percent. Even with four drugs, treatment was generally safe and well tolerated, and severe side effects were uncommon.

Click here to read the Keytruda plus Herceptin abstract.