This Indiana Clinic Has Patient-Care Stats Worth Bragging About

“We have relationships with patients, and so they trust us,” says James Gingerich, MD, of Maple City Health Care Center.

When I visited James Gingerich, MD, he launched into some of the nerdiest bragging I’ve ever heard.

We were chatting in front of his stand-up desk at Maple City Health Care Center, the clinic he founded and runs in Goshen, Ind.

“Here’s our data,” he said, and started clicking through a set of preventive care benchmarks.

His graphs compare Maple City’s performance to that of other clinics across the state — clinics like his that get federal funds.

Maple City is a federally qualified health center — a designation for community-based clinics in underserved areas that take all patients regardless of ability to pay.

The other clinics are getting their butts kicked.

“Yep.” He was just getting started. “Next, cervical cancer screening …”

“We have relationships with patients, and so they trust us,” he said.

The trust is earned, he said, by meeting patients where they are. The clinic earns trust by being available, structuring providers’ days so there’s always time to squeeze in an extra patient, or three, or more. It earns trust by being hyper-affordable: maintaining a sliding scale for fees, charging nothing for preventive screenings and dispensing prescription medication on-site, for a flat $5 rate.

“There are very few things we do that are more important in primary care than to really listen carefully to patients’ stories,” he said. “The rest is housekeeping. You have to take care of the housekeeping, but it’s only housekeeping.”

This is the payoff: “When that mom comes in with her kid who’s sick and she needs a pap smear, she’ll let us do the pap smear on the spur of the moment,” Gingerich said.

At 60, Gingerich is bespectacled and bearded, his hair combed back above the ears, mostly salt, his eyebrows dark and bushy. On the wall above his desk is a picture from his high school yearbook. Eighteen-year-old Gingerich is barely recognizable — with sandy hair drooping around his face, vaguely mushroom-styled.

But the idea for Maple City took shape only a few years after that photo was taken, when Gingerich was an undergraduate at Goshen College, which is affiliated with the Mennonite Church USA.

Gingerich is the son of Mennonite missionaries. In college he lived in a Mennonite community in the low-income neighborhood where his clinic now sits. He and the other Mennonites did “outreach projects.” Gingerich says he loved the relationships they built. And he saw a need for better health care in the neighborhood.

Those experiences shaped his life and career.

Goshen, known as the Maple City, is a town of more than 30,000 near Indiana’s northern border with Michigan — with dozens of freight trains lumbering through every day, tying up traffic.

For decades Goshen was one of the Midwest’s many “sundown towns,” where people of color were warned not to linger after dark. In more recent decades, the town renounced that heritage, including with a formal city council resolution in 2015 acknowledging the disturbing history. And the town has become more diverse. These days Goshen’s schools are about half Latino, half white.

However, some tensions remain.

And now, bridging lingering divides is part of how the clinic presents its mission. “People think of us as a medical organization. We’re not. We are fundamentally a peace and justice organization that happens to be engaged in our community through medical care.” That’s Gingerich quoting one of the center’s board members — a sentiment he repeats to visitors a lot.

Leticia Inchauregui, a 52-year-old patient with diabetes, is getting a checkup and renewing her insulin and other prescriptions. The doctor’s visit and all her meds cost $45 altogether.

She calls the center “a huge blessing” and emphasizes “how important this place is to us as Latinos.”

She spoke in Spanish, and one of Maple City’s staff interpreters translated for me.

She said that at other health care providers, “if you don’t have insurance, no one wants to take care of you. Here, they don’t discriminate against anyone.”

The clinic has always offered heavy discounts to uninsured patients — including undocumented immigrants who don’t qualify for Medicaid. But the clinic does charge a nominal amount.

“If it’s really good health care, it has to be a collaborative process, and that means that everybody has to be doing what they can,” Gingerich said.

However, the aftermath of the 2008 financial crisis tested Maple City’s commitment to providing affordable care.

Goshen and nearby Elkhart, Ind., had a huge spike in unemployment. The area lost lots of jobs.

“All of a sudden, you had families that had no source of income anymore,” Gingerich said.

“You had four or five families piling together into one house just to have a place to sleep, and one wage earner, maybe. In the midst of that, $5 for an office visit suddenly became prohibitive.”

Many patients stopped showing up, and the staff was stymied.

At one staff meeting, Gingerich said, someone raised a question about the missing patients: “‘If they don’t have money, what do they have?’ And the obvious answer was: time.”

So the clinic developed a new plan: Patients who couldn’t pay in cash could volunteer for local nonprofits, for schools — anyplace they liked — and earn $10 an hour in credit toward their health care bills.

It worked. “All of a sudden, we had these people who were coming back with these coupons and saying ‘Ahora puedo pagar!’ [Now I can pay!] — and getting re-engaged in care, and we knew immediately it was working.”

“We’ve tried to squash our salary scale way down,” she said, “so our providers are making a lot less than they would otherwise.”

Most doctors at Maple City earn $125,000 a year, which Gingerich estimates is 40% of what other local physicians make. To offset that disparity, doctors working at the center qualify for a federal student loan forgiveness program.

About nine years ago, the center applied to become a federally qualified health center, and later received major federal grants for the first time. “They had held off on that,” said Miller Rush, “knowing that there were some hoops to jump through.”

The designation qualifies Maple City for special funding — so the center can offer low-cost prescription drugs and collect higher Medicaid reimbursements than other providers.

Federal funds allowed the center to double in size; it currently serves about 6,500 patients. But that also meant more bureaucracy.

“When we doubled in size, I would say we probably quadrupled in the number of meetings we have,” Gingerich said.

So, despite its successes, Gingerich said he doesn’t intend Maple City clinic to get much bigger.

“We’re probably getting to the limits of the size we can accommodate, with the kind of culture we’re trying to foster,” he said.

Season 2 is a co-production of Kaiser Health News and Public Road Productions.

To keep in touch with “An Arm and a Leg,” subscribe to the newsletter. You can also follow the show on Facebook and Twitter. And if you’ve got stories to tell about the health care system, the producers would love to hear from you.

Listen to this episode here. And subscribe to “An Arm and a Leg” on iTunes, Pocket Casts, Google Play or Spotify. 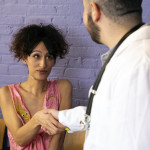