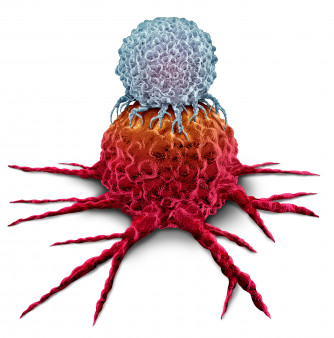 A Phase 1 study on customized immunotherapy shows promise for people with lung cancer.

Promising data on two new types of immunotherapy were presented at the American Association for Cancer Research virtual annual meeting.

A Phase I study by Ben Creelan, MD, of Moffitt Cancer Center in Tampa, evaluated tumor-infiltrating lymphocytes (TILs)—immune cells with known cancer-fighting ability—in people with metastatic non-small-cell lung cancer. The treatment, known as lifileucel, was previously shown to help people with advanced melanoma, but lung cancer has not responded as well to immunotherapy.

Using a process known as autologous adoptive cell transfer, T cells with a natural ability to attack cancer were collected from patients’ tumor biopsy samples, multiplied in a lab and infused back into the same individual. Participants also received the checkpoint inhibitor Opdivo (nivolumab) and a cytokine that encourages T-cell proliferation.

Among the 12 evaluable treated patients, 25% saw their lung tumors shrink, including two people with ongoing complete remission for about a year so far. If an additional patient awaiting a follow-up scan also turns out to have a confirmed response, the overall response rate will rise to 33%.

Another Phase I study showed that combining a personalized cancer vaccine with the checkpoint inhibitor Tecentriq (atezolizumab) led to tumor-specific immune responses in a majority of patients with various solid tumors, including non-small-cell lung cancer, melanoma, triple-negative breast cancer and bladder cancer.

To produce the vaccine, dubbed RO7198457, a patient’s tumor and blood samples are sequenced and up to 20 tumor-specific proteins known as neoantigens are identified. Messenger RNA from these proteins is then administered to the same individual to trigger an immune response against their cancer.

Blood tests from a subset of study participants found that nearly three quarters showed T-cell responses against the neoantigens in their customized vaccines. Among the 108 patients who had at least one tumor assessment, nine (8%) responded, including one colorectal cancer patient with a complete response. Another 49% had stable disease without further progression.