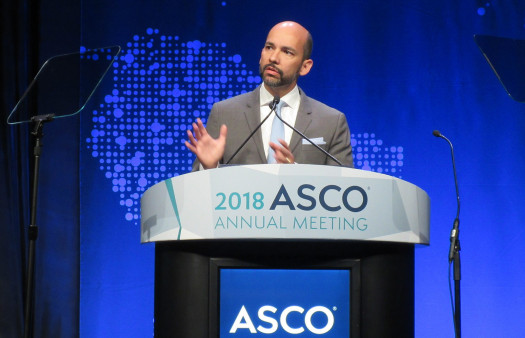 Immunotherapy worked better than chemotherapy as first-line treatment for people with a favorable biomarker.

The immune checkpoint inhibitor Keytruda (pembrolizumab) led to longer survival than platinum-based chemotherapy for advanced non-small-cell lung cancer (NSCLC) patients with a PD-L1 level of 1 percent or higher, according to a study presented at the American Society of Clinical Oncology (ASCO) annual meeting this month in Chicago.

“A large number of patients with lung cancer now have a new treatment option withbetter efficacy and fewer side effects than standard chemotherapy,” said lead researcher Gilberto Lopes, MD, of the University of Miami’s Sylvester Comprehensive Cancer Center. “Our study shows that pembrolizumab provides more benefit than chemotherapy for two thirds of all people with the most common type of lung cancer.”

Non-small-cell lung cancer, which accounts for more than 80 percent of all lung cancers, is often detected at a late stage and has a high mortality rate. Lung cancer is the leading cause of cancer-related death for men and women in the United States, according to the National Cancer Institute.

Keytruda is a type of immunotherapy that blocks the PD-1 receptor, an immune checkpoint on T cells that regulates immune function. Some tumors can hijack PD-1 to turn off immune responses against them. Drugs that block the interaction between PD-1 and its binding partner, PD-L1, can release the brakes and restore T-cell activity. People with higher PD-L1 levels in their tumors tend to do better on this type of treatment, but it is not a reliable predictor of individual response.

Keytruda alone is currently approved by the Food and Drug Administration as initial therapy for people with metastatic (spread beyond the lungs) NSCLC with high PD-L1 levels (>50 percent) and for those with PD-L1 positive tumors (>1 percent) who experience disease progression during or after platinum-based chemotherapy.

As reported at the recent American Association for Cancer Research annual meeting, the Phase III KEYNOTE-189 study showed that adding Keytruda to Alimta (pemetrexed) and platinum chemotherapy delayed disease progression and death in people with previously untreated metastatic nonsquamous NSCLC, with improvement seen across all PD-L1 levels. Nonsquamous NSCLC, which includes adenocarcinoma, is the most common type of lung cancer. Keytruda previously received accelerated approval for this indication based on promising Phase II study results.

KEYNOTE-407, another Phase III study presented at the ASCO conference, showed that Keytruda plus chemotherapy works better than chemotherapy alone as initial therapy for people with metastatic squamous NSCLC, a less common type that accounts for around a quarter of all lung cancers.

Luis Paz-Ares, MD, PhD, of Hospital Universitario 12 de Octubre in Madrid, reported that patients treated with Keytruda plus carboplatin and Taxol (paclitaxel) or Abraxane (nab-paclitaxel) had a 36 percent lower risk of death than those treated with chemotherapy alone.

The median overall survival duration was 15.9 months with Keytruda plus chemotherapy compared with 11.3 months with chemotherapy alone; the median progression-free survival was 6.4 months versus 4.8 months. Benefits were seen across PD-L1 expression levels, including those below 1 percent.

Lopes presented findings from KEYNOTE-042, which evaluated Keytruda without chemotherapy as a first-line treatment for squamous or nonsquamous advanced NSCLC in people with tumor PD-L1 levels of 1 percent or higher.

The earlier KEYNOTE-024 study showed that Keytruda worked better than chemotherapy, and with fewer side effects, for similar patients with PD-L1 levels of 50 percent or higher. KEYNOTE-042 was designed to test whether this was also the case for those with lower PD-L1 levels, which would greatly expand the eligible patient population.

This Phase III study enrolled 1,274 participants with locally advanced or metastatic NSCLC who did not have EGFR (epidermal growth factor receptor) or ALK (anaplastic lymphoma kinase) mutations that could be treated with targeted therapies. About 40 percent had squamous cancer and nearly half had high PD-L1 levels.

Keytruda was generally better tolerated than chemotherapy. Overall, about 63 percent of Keytruda recipients and 90 percent of chemotherapy recipients had any treatment-related adverse events; 18 percent and 41 percent, respectively, had severe or life-threatening side effects. However, a similar proportion in both groups (about 9 percent) stopped treatment for this reason.

A concern with checkpoint inhibitors is immune-related adverse events. In addition to restoring immune responses against cancer, the drugs can also take the brakes off the immune system more broadly, leading to excessive inflammation of healthy tissue. Immune-related adverse events occurred in 28 percent of Keytruda recipients compared with 7 percent of chemotherapy recipients.

These findings confirm and extend previous data showing that Keytruda monotherapy represents a new standard of care for first-line treatment of people with PD-L1 positive tumors, Lopes concluded. “Now we have to make sure every lung cancer patient who could benefit from the research presented at the ASCO plenary can have access to it,” he said.

Commenting on the presentation, Leena Gandhi, MD, PhD, of NYU Langone Health Perlmutter Cancer Center noted that the benefits of Keytruda monotherapy in KEYNOTE-042 were largely driven by people with higher PD-L1 levels. She added that it is still not clear whether Keytruda monotherapy or the Keytruda plus chemotherapy combo evaluated in her KEYNOTE-189 trial is a better first-line treatment option for advanced lung cancer. Tumor mutation burden and other biomarkers may enable clinicians to better select which patients will benefit from immunotherapy. “Lung cancer is no longer one size fits all,” she said.

Notwithstanding these caveats, data showing that some patients can achieve good results without chemotherapy represent a milestone, according to ASCO expert John Heymach, MD, PhD, of MD Anderson Cancer Center in Houston.

“Immunotherapy with pembrolizumab alone benefits a much larger number of patients than we had previously thought. This is yet another promising result with immunotherapy in lung cancer that brings new momentum to the treatment of this notoriously difficult disease,” Heymach told reporters. “The era when chemotherapy was the only option for NSCLC patients is coming to a close.”