On June 30, the National LGBT Cancer Network released results from the largest-ever survey of lesbian, gay, bisexual, queer, intersex and asexual (LGBTQIA+) people with cancer. Based on findings from more than 2,700 respondents across the United States, the report furthers understanding of how people in these communities experience cancer and cancer care.

“The fact that more cancer centers are reaching out for training and to do community engagement gives me hope,” said National LGBT Cancer Network executive director Scout, PhD. “Considering 40% of us will face a cancer diagnosis at some time in our lives, this is an issue many of us will be facing.” The network estimates that 100,000 LGBTQIA+ people are diagnosed with cancer in the United States each year, and 34,000 died of cancer in 2020.

Highlights from OUT: The National Cancer Survey were shared during a virtual presentation featuring people who helped put together the report, medical experts and several cancer survivors. The network defines survivors as people living with cancer now or in the past. The full report is available online.

The web-based survey was conducted between September 2020 and March 2021. It was promoted via social media and through collaborations with more than 100 community organizations. The anonymous survey, available in English or Spanish, took about 30 minutes.

A total of 2,728 adults (ages 18 and older) completed the survey. This is much larger and somewhat more diverse population than the 300 participants surveyed a decade ago.

Nearly two third of respondents (63%) were designated male at birth, 37% were designated female and just over 1% were intersex. A majority (60%) currently identified as men, 32% as women, 3% as transgender, 2% as genderqueer or nonconforming and 2% as nonbinary. More than half (56%) said they were gay, 25% identified as lesbian, 4% as bisexual, 2% as pansexual, 2% as queer and 1% as asexual. Despite efforts to reach out to people of color, respondents were mostly white (85%), followed by Latino (6%), multiracial (4%), Black (3%) and other racial/ethnic identities (2%). The population was highly educated, with 80% having a college or graduate degree, and almost all (97%) had health insurance. Nearly half lived in suburbs, 39% in urban areas and 15% in rural areas. 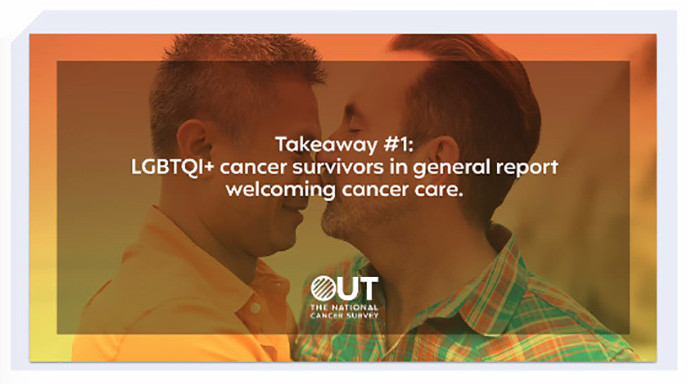 The findings include both good news and areas that need improvement. For example, 89% of respondents found the environment at their cancer treatment center welcoming and 87% felt safe disclosing their sexual orientation or gender identity. A large proportion said that all or most of their primary care providers (84%) nurses (85%) and health care support staff (83%) offered culturally competent care; however, this fell to about two thirds for “gender expansive” (for example, transgender, gender-nonconforming or nonbinary) respondents. What’s more, it was not easy to identify welcoming providers, and many relied on referrals from other LGBTQIA+ cancer survivors or visited multiple providers in order to find competent care.

Only 13% of respondents said that they were able to find resources about being an LGBTQIA+ person with cancer, but 58% said it was important that their posttreatment care plan include tailored resources. Survivors speaking during the launch stressed the need for information about sexual health that does not assume everyone is heterosexual. Only 18% were offered information about options for fertility preservation.

“This survey has some really positive news, for example that many people can get to welcoming cancer care,” Scout said. “It also has some very clear areas where the healthcare industry needs to listen and act, for example how frequently LGBTQIA+ people want tailored resources and how often we can’t find any.”

Suggestions for creating a welcoming and affirming environment include asking and using preferred pronouns, providing gender-neutral bathrooms, not making assumptions about people’s support systems and providing resources tailored to diverse communities. Survivor Charlie Ruiz Vazquez stressed that it’s important that the entire staff at cancer centers, such as cafeteria workers and security guards—not just doctors and nurses—be trained to use gender-inclusive language.

Caroline Vahrenkamp identified as a straight cisgender man when diagnosed with Stage IV thymoma six years ago. “Transition as a cancer survivor was an eye-opening experience,” she said. She was her oncologist’s first trans patient, and he uducated himself about how gender-affirming hormones could interact with chemotherapy. But dealing with the staff at a hospital in Indiana was challenging. “Some nurses are wonderful, others can’t wrap their heads around the fact that I don’t look like my old name [on my records]…Systems are not set up to handle different gender identities, and until they are, it will be a struggle for those of us who don’t fit in the box we were assigned at birth.”

Vahrenkamp, now 45, said she would not have had the courage to transition if she hadn’t had cancer. “Sometimes it’s kind of a wake-up call that gets you going in the right direction,” she said. But Scout noted that another survey respondent couldn’t go through with a gender transition already underway because of their battle with cancer.

Centers that specialize in “gendered” malignancies such as breast, cervical, ovarian, prostate or testicular cancer can feel particularly unwelcoming. Breast cancer strikes cisgender and transgender men and women of all sexual orientations, and settings designed with straight cisgender women in mind may make others feel out of place. Likewise, some people with prostate cancer identify as women or nonbinary.

“LGBT people are less likely to go to doctors for fear of feeling dismissed or gaslit, if you even have the privilege of having access to that kind of care to begin with,” said lymphoma survivor Maria LaMonica. “Trans men don’t necessarily feel comfortable getting a mammogram at a Pepto Bismol pink office…When you’re sick, especially if you’re diagnosed with something as serious as cancer, you’re at your most vulnerable—everybody deserves to feel safe and comfortable in that situation.”

A key takeaway message is that LGBTQIA+ people with cancer often have alternative social support structures, and they may rely more on friends, chosen family and “tribes” than on legal spouses or biological family members.

“Your emergency contact isn’t necessarily the person who supports you every single day,” said Don Dizon, MD, of Rhode Island Hospital and Brown University in Providence. “We need to help clinicians understand the concept of tribe and get away from the idea that your spouse is the only person they will talk to.”

When asked who were their primary support people, 64% respondents said friends, 59% said current partners, 38% said siblings, 29% said parents, 15% said former partners and 9% said someone else. Only a small proportion of respondents had participated in support groups, and many described difficulty finding welcoming support spaces.

Respondents indicated that COVID-19 had increased their isolation, made it more difficult to receive the support they needed and prevented them attending appointments with their supporters. About a third reported delays in screening or treatment, and 75% reported using telemedicine.

Speaking during the web presentation, Bill Jesdale, PhD, of the University of Massachusetts Medical School, a gay man and testicular cancer survivor, described how lessons learned from his earlier AIDS activism helped him get better cancer care. “I learned to fight back against unjust treatment and learned we are our own experts,” he said. “Never be afraid to ask for what you need and never put up with care that isn’t safe and respectful.”

Added Tony Walker, an HIV prevention worker at AIDS Alabama and a colorectal cancer survivor, “Let’s treat people like they want to be treated. That shouldn’t take a class—it’s just human decency.”

The National LGBT Cancer Network works to improve the lives of LGBTQIA+ cancer survivors and those at risk by educating these communities about their increased cancer risk—for example, due to higher rates of smoking and alcohol use—training health care providers and advocating for LGBTQI+ engagement in mainstream cancer organizations.

Scout said that future provider trainings would rely heavily on the survey findings. In addition, the network aims to produce community briefing sheets and work with researchers to release the data in peer-reviewed publications. It is planning a website on sex after cancer. The network also aims to do more in-depth surveys of people of color and gender expansive people, given their underrepresentation in this survey.

Survey participants were invited to join an LGBTQIA+ survivors’ panel, which now has more than 1,200 members. They have access to virtual support groups, opportunities to help educate providers and early releases of data reports. Survivors can join at cancer-network.org/programs/support-groups-for-survivors.

OUT: The National Cancer Survey is the result of a partnership with more than 40 organizations, including the Center for Black Equity, Howard Brown Health, the Susan G. Komen Breast Cancer Foundation, Stupid Cancer and several major cancer centers. Financial support was provided by Bristol Myers Squibb.