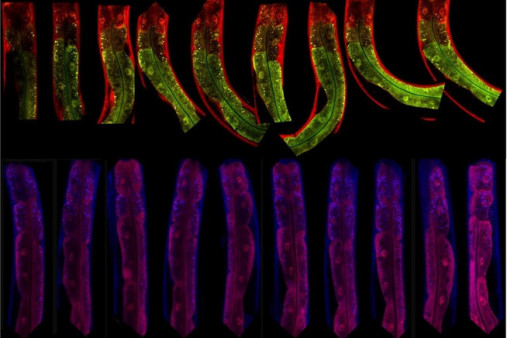 How strongly a worm glows correlates with its protein-making capacity. Dim worms (on the left) make less protein while brighter worms (on the right) make more. Courtesy of Fred Hutchinson Cancer Research Center / the Brent and Mendenhall Labs

Like snowflakes, all of us are a little different, even genetically identical twins or clones. But why do individuals with matching DNA vary? And how do those nongenetic differences affect risk of genetically influenced diseases like cancer?

Whether a mutation manifests, and how strongly, comes down to cellular physiology. New work from scientists at Fred Hutchinson Cancer Research Center and the University of Washington shows that a cell’s capacity to turn genes into proteins influences its characteristics, or phenotype. Using genetically identical worms, they observed that differences in this capacity influence how strongly a cancer-related mutation changes a worm’s characteristics. Published in the journal Nature Communications, the study also showed that protein-expression capacity also underlies differences in worm lifespans.

The findings establish that “general cell-to-cell differences in the ability to make genes into proteins have phenotypic consequences,” said Fred Hutch’s Roger Brent, PhD, who co-led the study.

Though the team studied genetically identical worms, he suspects that differences seen in genetically variable populations, such as humans, could also be attributed to this phenomenon. The findings could help explain why only certain mutated cells turn cancerous, or why only certain members of a family carrying the same disease-causing mutation get that disease.

If this basic insight into cellular physiology extends from worms to people, it could have ramifications for treating disease, Brent said. Many promising cancer drugs differ greatly in their effectiveness in individual cancer patients. Finding ways to reduce natural variation in cell behavior could help improve drug efficacy by making all of a patient’s cancer cells respond to a drug in the same way, or by improving the chances that a drug will be similarly effective in every patient.

What worms can tell us

To pinpoint the cellular process that influences how genes manifest, the team turned to worms. Brent had previously studied the problem in yeast, looking at signals that yeast send and receive during their mating cycle.

This time he teamed up with Alex Mendenhall, PhD (also a senior author and a former postdoc in Brent’s lab who is now an assistant professor of pathology at the University of Washington), and Nikolay Burnaevskiy, PhD, a postdoctoral fellow in Mendenhall’s lab, to examine the question in worms.

The scientists studied a species of nematode often used in research. One of the characteristics of these worms that makes them so useful for scientists is that adult worms have a specific number of cells: 432 to be exact.

Mendenhall had developed a microscope-based method to measure protein abundance in worms. He engineered worms so they’d produce a protein that glows green during the same conditions and at the same level as another protein that helps protect the worms from heat shock. Cells that make a lot of this heat shock-protective protein also make a lot of the glowing protein. Those that made little of the heat shock protein would make a correspondingly small amount of glowing protein. The team looked specifically at the worm’s intestinal cells. The brightness or dimness of these cells would then tell the researchers how much heat shock protein had been produced after a worm was subjected to heat stress.

Working with worms in laboratory dishes, the investigators discovered that after heat shock, some worms are great at making proteins from genes and some really struggle. Proteins are required for every cellular function and are encoded in our DNA. Between a gene and its protein is an intermediate molecule called RNA. This molecule makes it possible for a cell to copy DNA’s protein-making instructions and transport many copies to its protein-building molecular machines.

But several molecular processes control protein abundance. Brent, Mendenhall and Burnaevskiy looked at three main steps in this pathway to see which could be affecting the gene-to-protein output without any change to the gene’s DNA sequence.

First, they examined the signals that tell genes to turn on. In previous work in yeast, Brent’s group had found that variation here was the strongest contributor to nongenetic cell-to-cell variation. But in worms, the researchers didn’t find enough variation at this step to explain the different brightness of different cells.

Next, they looked at the first step in RNA production, specifically the ability of RNA-making proteins to bind DNA. Again, the team saw there wasn’t enough variability at this step to explain variation in worm glow.

“The other big contributor is cell-to-cell differences in the ability to take a gene — any gene — and make protein out of it,” Brent said. “Some cells are good at taking a gene and making protein: They make many copies of the protein. Other cells are not so good at this.”

Remember a worm’s brightness reveals how much of a specific heat shock protein it’s made. Previous scientists had linked worm lifespan to differences in heat shock-protein abundance, because heat shock proteins are chaperone proteins that help keep other proteins properly folded and functional.

“So, if you wanted to make a story about why the bright green worm lived longer because it had more chaperones, you might try to do that,” Brent said. “Rather, these results point to another idea, which is just that the worm makes more green fluorescent protein from the heat shock promoter because it’s just generally better at making proteins, and it’s just healthier.”

Then the team looked at protein-making capacity in the context of genetic mutations. Not every person who inherits a cancer-promoting mutation in, say, BRCA1 or BRCA2 will get breast cancer. And in those who do, only a few cells will give rise to these tumors, even though the BRCA mutation is carried in every cell of that person’s body.

Worms don’t get cancer, but they have a version of a gene linked to many human cancers, which is known as Ras. Mutated Ras in worms doesn’t cause cancer (having hit the magic cell number 432, adult worms halt cell division outside of making sperm or eggs), but there is an effect. Instead, Ras is important for cell division during worm development. Ras mutations in worms can trigger the creation of larval tumors, extra vulva-like structures — which basically means the worms get some bumps next to their real vulva.

But not all worms with Ras mutations get bumps, and those that do don’t have the same number of bumps. Brent, Mendenhall and Burnaevskiy tested whether worm protein-making capacity correlated with bumpiness in worms carrying Ras mutations. It did. Bright green worms were both more likely to have any bumps, and to have more bumps, than dim worms.

Though only tested so far in worms, the findings could explain not only why mutations don’t always manifest the same way, but the different effects of different mutations, Brent said.

How about a mutation that creates a defective protein? Maybe its job can still get done if there’s enough of this protein around, even if it’s defective. So high-capacity cells might show no effect.

You’d expect to see the opposite in cells that aren’t good at turning genes into protein. In that situation, less protein would magnify the defective protein’s problems and the mutation would be obvious. The model could also explain cells’ ability to protect themselves from cancer-causing exposures, Brent said.

“That would be an example of how a weakly heritable phenotype that only affected a few cells in the body could be exactly the wrong phenotype,” he explained. Say all the cells in a patch of skin got fried by DNA-damaging UV radiation. “If you were [the cell that was] out of DNA-repair proteins, you would be the guy who got hit.” Unable to protect itself, this cell would be more vulnerable to DNA damage and, ultimately, cancer.

Curtailing variability: a pathway to better cancer treatment?
Cell-to-cell and person-to-person variation is a nagging problem in medicine, Brent said.

“Say you have cancer cells that respond differently to an anti-cancer drug. OK, some cells escape. If you could decrease cell-to-cell variation in a population [of cancer cells], then at the same dose [of chemotherapy] fewer cells would escape,” he explained.

By constraining variation in cells’ responses to therapy, we could theoretically improve patients’ responses to drugs currently on the market. An add-on therapy that could do this might take some guesswork out of cancer treatment, both increasing its effectiveness and even decreasing the fear of recurrence that patients face. Brent is starting to screen for drugs that might reduce cell-to-cell variation and enhance cancer therapy in this way.

This article was originally published on January 17, 2020, by Hutch News. It is republished with permission.