However, people with long-term suppression of HIV still have a higher risk of cancer compared with HIV-negative individuals.

People with HIV who go on antiretroviral treatment and maintain a fully suppressed viral load over the course of many years greatly mitigate their risk of cancer. However, such long-term viral suppression does not eliminate the disparity in cancer risk between those with and without HIV.

Sixty-two percent of the HIV-positive individuals achieved long-term viral suppression at some point during follow-up, doing so for a median 3.0 years. 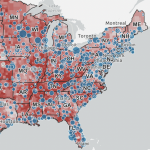