Celia Ruiz Tomlinson was diagnosed with Stage IV non-small-cell lung cancer in 2012. Today, she’s 79, and blogging about her life.

I had a dry cough that wouldn’t go away, so I got lung X-rays and was referred to a pulmonologist, who ran CT and PET scans.

The scans showed a large mass at the bottom of my left lung; a biopsy confirmed it was cancer. My pulmonologist scheduled a thoracic surgeon to remove the lower lobe of my left lung, but as soon as he cut me open, he found other growths that prevented him from doing the surgery. They found too many little spots to count in both lungs—it looked like the Milky Way in there. Instead, he referred me to an oncologist.

I was with my husband and son when I was diagnosed with Stage IV non-small-cell lung cancer, with an EGRF mutation. I was told I had eight months to live. It’s a very shocking thing. But because of my background, I was resilient, and that let me control my fear right away.

I came to the United States in 1968 with $300 and my diploma. I met a lot of resistance from the establishment because they were not prepared for a woman engineer, a Filipino engineer. I had to fight my way in. But I succeeded. When you have survived something like that, you feel like you can do anything.

We got a second opinion. That oncologist suggested an EGFR inhibitor that I was eligible to take. Within 100 days, it had shrunk my tumor by 80%.

I started blogging at Inspire.com, running a group for people taking the same drug as me. I answered people’s questions and kept them up to date on my progress.

I was seeing my oncologist every two and a half months for MRIs, looking for signs of progression. After 20 months, he saw two new little things. He said I could stay on the drug I was taking or try to get into a clinical trial for a new EGFR inhibitor. I joined the trial. I was on it for nearly three years. I guess it really was working for me!

My husband and I were living in New Mexico at the time, and every three weeks, we had to drive 894 miles round-trip to the University of Colorado Hospital in Aurora for the trial.

Once I started the trial, I started my own blog at celpeggy.wordpress.com. People seemed to like it, especially the humor.

After four months on the trial, I developed hyperglycemia [high blood sugar], which they treated with another medication that caused me to lose my appetite entirely. My husband and I moved to Southern California, where I continued my trial at UCLA. For months, my doctors and I adjusted my dosage of the trial drug and the hyperglycemia drug. Meanwhile, I tried medical marijuana to regain my appetite.

I developed shingles. This was the most painful experience of my life, and I’ve experienced a lot of pain. Still, I don’t think anything was worse than the loss of appetite. That was rough.

My husband was diagnosed with acute myeloid leukemia. He had been my primary caregiver for four years. I joked that we were now in a race to the grave together, but he didn’t like that type of graveyard humor.

I was invited by the drug company running the trial to share my cancer story and overall positive experience on the treatment at the Food and Drug Administration’s public hearing about it. I asked them to accelerate the approval of the drug; ultimately, it didn’t get approved, but them’s the breaks.

My husband’s health spiraled downward rapidly following three treatments that included a clinical trial. Finally, his primary care physician recommended hospice. After seven days, he died at home. For the first time since my diagnosis, I would have to care for myself.

There were some progressions in my main tumor, so I had to stop the trial. But a new EGFR inhibitor had just been approved that I could be treated with. It was a big change to go from being treated at a teaching hospital in a clinical trial to being treated by a one-man-band oncologist. He’s not connected to a university. At a teaching hospital, there’s access to more kinds of treatments, and they’re always up to date. I prefer to go to the university, but the insurance will not let me do that because I am no longer in a trial. 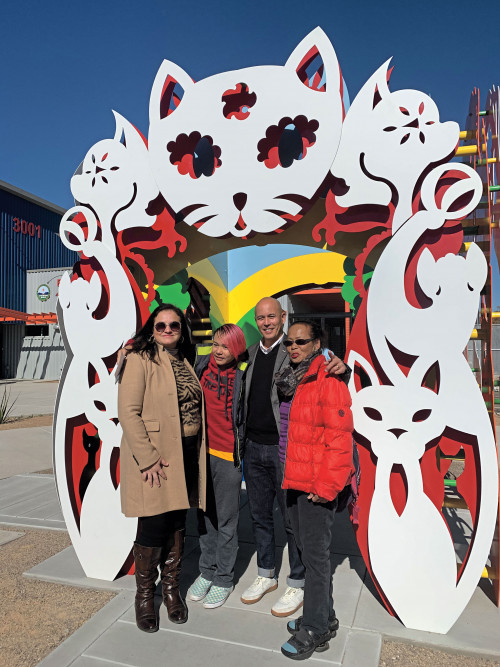 I’ve been on this medication for three years with no side effects. The MRI and CT scans were every three months to start and then every four months and then every eight months, and now it’s once a year. The drug is doing its job, and I’m not very sick—it’s working.

I underwent five sessions of SBRT (stereotactic body radiation therapy) to zap a slow-growing nodule of 1 centimeter in the middle of my left lung. Since the cancer diagnosis in 2012 there have been lots of sub-centimeter nodules too many to count and measure in both of my lungs. A year ago, one measuring 6 mm was noticed. No one knew if it was new or one in the Milky Way grew. Since I had been doing so well my oncologist decided to put me in once-a-year CT scans instead of every four months. In the last scan, the 6 mm nodule measured 12 mm, a growth of 6 mm in one year. A PET/CT scan was done two months later and determined the nodule to be 10 mm. All we know is that the nodule grew 4 mm in a year. Pretty slow but growing! Hopefully, the treatment worked.

On July 8th, I had an appointment scheduled with my primary care physician (PCP). As usual he required me to get fasting blood test panels from the lab one week ahead to allow time for processing, the results of which would help him determine all that’s wrong with me. While he says he would like to see perfect numbers for my ripe old age, I suspect a slightly amiss reading would also bother him, but not intensely, because it would present an opportunity for him to refer me to one of his specialist buddies.

At the doctor’s office, the med tech did the intake motions. She weighed me, took my temperature and blood pressure, and instructed me to sit down and wait for the doctor. It turned out to be an unusually short wait, the best thing in these pandemic times. Maybe I was the only patient for the day.

I have had an entertaining doctor/patient relationship since Day 1 four years ago. My PCP is the most fun PCP I’ve had in memory. Actually, until the day I signed up for Medicare, I never had a PCP. I did not like going to doctors unless I had to, which was seldom.

As instructed, the PCP’s med tech handed me the fresh order for a fasting blood test before the end of the month. I assumed he had already plopped down for a nap.

I scheduled my appointment online. I did not have to talk to a machine. Just press, press, done— date and time all fixed.

On the eve of the appointment date, the lab emailed me a reminder: Due to COVID-19, we’re limiting the number of people in the waiting room. Come on time but not too early. Sign in, wait in your car or somewhere, but not so far you can’t come quickly when you receive our text that it’s your turn. It thrilled me that the lab and I were on the same page! Having failed to get the blood test a few times three weeks ago, I had no plan to travel to Disneyland to wait for my turn.

I found an empty seat in the waiting room. When it was my turn for the blood draw, I discovered I had forgotten to bring my PCP’s order! Then it dawned on me that the doctor’s office was just next door. I walked a few steps and got an order slip from my PCP. At long last, the fasting blood test was behind me.

The following day, the lab’s patient portal notified me of the results. I reviewed them and found everything acceptable.

I’ve been on six months of collagen supplements now and hair has grown on the vacant real estate on my forehead, which has been restored to its original width. I’ve been letting my hair go gray again after suspecting that chemicals in the ebony dye I use prompted the hair loss. Now I notice, intermingled with gray roots, new growth of black hair has come through the scalp!

I have been trimming my fingernails and toenails more often. They grow faster. My fingernails used to be brittle, ridged, and crumbly—all signs of the aging process, I thought. However, some readers of my blog suggested these may be side effects of the targeted therapy I’m on. But regardless of the reason, my nails are whiter, stronger, healthier and not crumbly. Also, the skin on my forearms seems taut.

In addition, I’m not experiencing any joint pain, even when pain occurred in my left knee after I got carried away with the pedometer app on my smartphone. However, it could be the prescription med I’m taking for bone loss. Who knows? Who cares? No pain is no pain.

Do you have a supplement story to share? Let’s hear it. Meanwhile, Happy Dance!

Lung cancer develops when cells in the lungs grow out of control. Non-small-cell lung cancer (NSCLC) is the most common type, accounting for around 80% of cases.

Lung cancer is often diagnosed late and is difficult to treat. It ranges from Stage I to Stage IV, which is metastatic cancer that has spread elsewhere in the body.