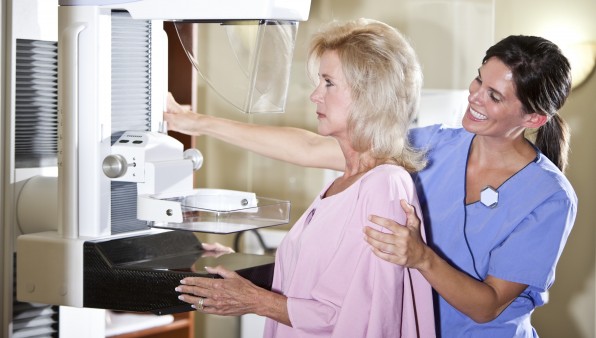 Study shows eight-month survival advantage for those not previously treated with chemotherapy.

Lynparza (olaparib), the first PARP inhibitor approved for advanced breast cancer, may lead to a small improvement in overall survival for people with BRCA gene mutations, in addition to progression-free survival and tumor shrinkage, according to the latest analysis from the OlympiAD trial presented at the recent American Association for Cancer Research annual meeting.

Women with inherited BRCA1 or BRCA2 gene mutations are at higher risk for breast and ovarian cancers. Around half of women who carry these mutations will develop breast cancer, according to the National Cancer Institute.

Lynparza works by blocking poly (ADP-ribose) polymerase, or PARP proteins, which play a role in DNA damage repair. People with certain BRCA mutations do not make proteins that repair DNA and suppress tumor formation. Inhibiting PARP results in more unfixable DNA breaks that can halt cancer cell division, so BRCA-related cancers are especially vulnerable to this type of drug.

Breast cancer is classified by the kind of receptors it expresses. A majority of breast cancers carry receptors for estrogen or progesterone, known as hormone receptor (HR)-positive, and treatment usually includes hormone-blocking drugs. Other tumors express the HER2 (human epidermal growth factor receptor 2) receptor and can be treated with HER2 inhibitors like Herceptin (trastuzumab). Triple-negative breast cancer doesn’t express any of these receptors and is hardest to treat.

The study enrolled 302 participants, almost all women, with a median age of 44. Half had HR-positive and half had triple-negative breast cancer. About 70 percent had previously received chemotherapy for metastatic disease, including about 30 percent who had used platinum-based regimens.

Participants were randomly assigned to receive Lynparza tablets twice daily or their physician’s choice of chemotherapy using Xeloda (capecitabine), Halaven (eribulin) or Navelbine (vinorelbine). Xeloda is a pill; the others require IV infusion. They were treated until they experienced disease progression or unacceptable side effects.

As previously reported, the median duration of progression-free survival, meaning patients were still alive with no worsening of disease, was 7.0 months in the Lynparza group and 4.2 months in the chemotherapy group—a 42 percent improvement. The overall response rate, meaning complete or partial tumor shrinkage, was 60 percent in the Lynparza group and 29 percent in the chemotherapy group. These results were statistically significant, meaning they were unlikely to be attributable to chance.

There were some survival differences across subgroups in the study. For people who had received no prior chemotherapy for metastatic disease, the median overall survival was 22.6 months with Lynparza versus 14.7 months with physician’s choice of chemotherapy—a significant 49 percent reduction in mortality. Survival was similar for those who had received prior chemotherapy (18.8 months versus 17.2 months), and there were no significant differences according to whether they had used platinum-based regimens.

Median survival was almost the same in both treatment groups for participants with HR-positive tumors (21.8 months versus 21.3 months, respectively), but Lynparza had a small advantage for those with triple-negative breast cancer (17.4 months versus 14.9 months).

In an extended safety analysis, severe side effects were still less common in the Lynparza group (38 percent) than in the chemotherapy group (50 percent). About 8 percent and 5 percent, respectively, stopped treatment as a result of adverse events. Nausea, vomiting, fatigue and anemia occurred more often with Lynparza, while neutropenia (low white blood cell count), hair loss and hand-foot reactions were more frequent with chemotherapy.

In January, the Food and Drug Administration approved Lynparza for people with HER2-negative metastatic breast cancer who carry inherited BRCA gene mutations and were previously treated with chemotherapy. The new results suggest Lynparza may work better if used earlier as first-line therapy.