Lilia Law, an information technology manager, lives in Gaithersburg, Maryland, with her wife and daughter. She has multiple myeloma.

I’m 38. I work out, eat a healthy diet. My dad is African American, and my mom is from Mexico. In 2016, I donated one of my kidneys to my mom. In 2018, I moved from Houston with my daughter to be close to the woman who would become my wife. 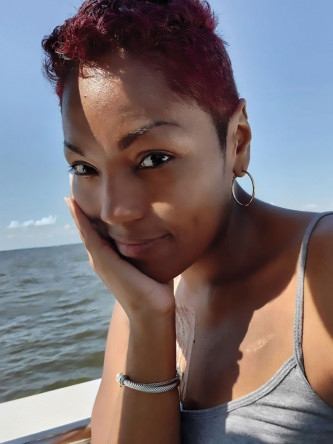 I visited my mom in Texas; she has colon cancer. Flying back, I felt sick. Over the next few weeks, I had nausea, bad migraines. I thought I had irritable bowel syndrome, so I saw a gastroenterologist, who didn’t see anything except some immune factors that I should look into. But I let it go.

My legs started feeling weak; they even gave out so I slid down the stairs to the loft. A general practitioner did a metabolic panel. He was really concerned about the levels of creatine in my kidneys. For women, levels over 1.2 are abnormal; mine were 2.5. Over the next three weeks, the levels went up to 4, a sign of acute kidney failure, and then 8. He helped me get in to see a nephrologist.

The in-house lab test result at the nephrologist was 10.2. They sent me to the emergency room. I called up my girlfriend. At the hospital, they found cancerous cells in my kidneys; an oncologist/hematologist told me it might be a blood cancer. Things moved fast. Two days after a bone marrow biopsy, he told me they found multiple myeloma. He’s making small talk. I’m like, Dude! Blood cancer? I didn’t even learn until much later that this kind of cancer is more common in Black people.

I toured the infusion floor where I would start chemo the next day—twice a week for six months. I was shaking hands with the nurses, tears just flowing. My daughter! Who would take care of her? I was told there was no cure but my cancer was highly treatable. Sounds good, I guess?

I flew to Houston to tell my daughter. It was her 15th birthday. It was so hard for her. She was about to move in with me in Maryland, become a high school freshman. I knew it would be tough, but we would get through.

I wound up doing chemo for a year. The cancer had affected my kidneys. With treatment, they believed, my kidney function would come back. I didn’t want dialysis. I saw my mom go through that.

My 36th birthday was October 5. I was always tired. My body ached. I had fevers, heat radiating throughout my body. I would just lie down, sleep.

I saw a doctor who specializes in medical cannabis. My oncologist said it was OK. I worked with an in-house physician at a dispensary who recommended tinctures with THC and CBD, with certain terpenes, and a translingual one to help me sleep. It really helped. It reduced nausea so I could eat, lowered pain so I could sleep.

I was diagnosed with end-stage renal failure. My creatine levels were 11.6. My nephrologist told me I could do peritoneal dialysis, which is easier [than hemodialysis]. I went into the hospital to have a tube inserted in my stomach, and they trained me to connect it to a machine at home, eight hours a night.

I didn’t want to be a burden on my girlfriend. I felt some guilt. It’s so much, let alone for someone I had just met a couple of years before, when I was healthy. Maybe she was putting on a brave face. We got into couples therapy to make sure we were solid. In hindsight, it was all in my head.

My multiple myeloma numbers were low enough that I could stop chemo. I was referred for a bone marrow transplant. I got a second and a third opinion, and they all recommended the same thing. My insurance accepted it. I started the medical workup. They injected me with a medicine that amplifies stem cells, which are harvested and frozen to be put back in your body.

My girlfriend took me and my daughter out to celebrate my birthday. I wanted salsa lessons. I grew up around salsa because of my mother. I walk in, and they’re playing this song I grew up listening to. I’m dancing already—it’s my jam, right? Then I see all my family there, friends from Houston, her family. After salsa lessons, she gets down on one knee, pulls the ring out. I say, “OMG, yes!”

We signed off on a new house on November 3, got married on November 13. It was the middle of COVID, so it was just my daughter, my mom and my brother in my mother-in-law’s living room—an intimate wedding. It was everything.

The next day, my wife drove me to the hospital with my mother. Because of COVID, no one could spend time with me. A bone marrow transplant is super rough on your body. I went into early menopause due to the high-dose IV chemotherapy. And when stem cells multiply, bone marrow increases, but bones don’t stretch, so it’s super painful. I had migraines, throwing up, fevers, infections. My thick curly hair fell out; my face was swollen.

The nurses became my family. Even water was difficult to swallow. I was there 17 days.

I was super underweight, around 114. My wife made smoothies. I drank through a straw. I took a three-month disability leave. It took me about four months to be back to myself.

I was in remission! I was home, recovering. In May, I started maintenance oral chemo to prevent a relapse. My hair grew back, now fine and straight. But I was going to need a new kidney. The plan was to rest for a year, then get on the kidney donor list.

I got the call on Valentine’s Day. They had a donor, a 19-year-old who died in a car accident. We drove to Baltimore the next morning. I hadn’t eaten anything, so they gowned me up. The kidney arrived around 2 p.m. I got a new kidney. I was taken off the chemo to avoid any damage to the new kidney.

The first month was the most difficult. I felt depressed, was moody and angry sometimes. I had survivor’s remorse, felt bad for that 19-year-old. Someone gave a life so you can have a life.

I’m relying on my wife again. I don’t like to feel weak; I like to push through. But I am learning to be patient with myself. It’s OK to ask for help. I’m in a much better place now. I was on like 14 different meds, now down to three or four a few times a day. My side effects are more tolerable. Woo-hoo!

I know multiple myeloma is a marathon, not a sprint. My myeloma numbers started to rise in April, so I’m back on maintenance oral chemotherapy, but it shouldn’t interfere with my kidney.

Cancer is daunting. But you don’t know how strong you are, how much of a badass you are, until you go through it. I bought a house, got married, have a business. I never let any of this stop me. If anything, I have bigger goals now. This too shall pass. Why not get through it by laughing?