A new type of targeted cancer therapy shrinks tumors that carry a specific genetic mutation regardless of where they may be located in the body, researchers reported at the American Society of Clinical Oncology (ASCO) annual meeting this week in Chicago.

Studies showed that 76 percent of people with 17 types of cancers responded to treatment with larotrectinib, an agent that acts against tumors with tropomyosin receptor kinase (TRK) fusions. Larotrectnib is the first cancer drug to be developed simultaneously for adult and pediatric populations, and treatment was effective in both groups.

“This really brings us into a new era where treatment is truly based on mutation, not location,” Sumanta Kumar Pal, MD, from City of Hope cancer center said at an ASCO press briefing.

Cancer therapies have traditionally been developed, tested and prescribed for tumors located in specific parts of the body. But treatments that focus on characteristics of the tumor itself — known as “site agnostic” — could reduce the need for separate clinical trials and would be beneficial for people with rare cancers that are not so widely studied.

Larotrectinib, which is being developed by Loxo Oncology in Stamford, Connecticut, is a selective inhibitor of TRK (pronounced “track”). When one of the three TRK genes in a cancer cell fuses with another gene, it acts as an “ignition switch” that promotes cancer growth, Hyman said. Interfering with this process could therefore potentially slow or halt the progression of cancer.

TRK fusion mutations are uncommon overall, occurring in around 1 percent of all cancers, but they are seen in more than 90 percent of some rare cancers. Hyman estimated that upward of 5,000 people in the United States are diagnosed with TRK fusion-positive cancers each year, and because of limited testing, this may well be an underestimate.

Study participants had cancer at 17 different sites, including the lungs, colon, thyroid, skin and breast. About a third had two uncommon cancer types — salivary gland cancer (22 percent) and infantile fibrosarcoma (13 percent). Just over half were previously untreated or had tried one prior chemotherapy, while about a third had tried three or more chemotherapies. Because of the rarity of some of these cancer types, some of the patients traveled from across the world to join the trial, Hyman noted.

Everyone was treated with larotrectinib monotherapy; there was no placebo or control arm. Unlike many cancer drugs that are given in cycles, larotrectinib was given continuously as long as a patient continued to benefit. 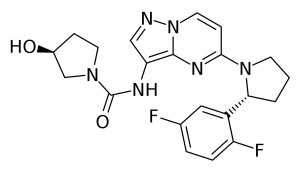 Larotrectinib worked rapidly: Patients reported that their symptoms improved within days after starting therapy, according to Hyman.

Of the 50 participants with comparative scans before and after starting treatment, the objective response rate was 76 percent, with 12 percent having complete responses and 64 percent having partial responses. Another 12 percent had stable disease and 12 percent experienced cancer progression. Efficacy was good regardless of patient age or tumor location.

“To me this was really striking — more than three out of four patients responded to therapy,” Hyman said. “You’d be hard pressed to find a targeted therapy that has results like this.”

Ninety-three percent of people who responded were either still doing well on larotrectinib or saw enough cancer regression that they became eligible for potentially curative surgery to remove the tumor.

However, six patients who initially responded later experienced disease progression. Five of these developed a mutation that reduces drug-binding potency. Loxo is now working on a next-generation TRK inhibitor (LOXO-195) to address this acquired resistance, according to a company press release.

Treatment was generally safe and well tolerated. The most common adverse events were fatigue (38 percent), dizziness (27 percent), nausea (26 percent) and anemia (26 percent). These were usually mild or moderate, though 10 percent developed severe anemia. (TRK normally plays a role in balance, which could explain the dizziness.) No one stopped treatment early because of adverse events. Seven people did reduce their larotrectinib doses, mostly due to neurocognitive side effects, but they maintained tumor regression nonetheless.

Last July, the FDA gave larotrectinib a “breakthrough therapy” designation, meaning it could offer a significant advance for patients with unmet need. Loxo expects to submit a new drug application in late 2017 or early 2018, Hyman said.

Although larotrectinib works only against a small proportion of cancers, it may help usher in a new treatment paradigm. Just last month an approved cancer immunotherapy drug, Merck’s Keytruda (pembrolizumab), received the first FDA approval for tumors at any site that have different genetic mutations, known as microsatellite instability or mismatch repair deficiency.

“These findings embody the original promise of precision oncology: treating a patient based on the type of mutation, regardless of where the cancer originated,” Hyman said. “We believe that the dramatic response of tumors with TRK fusions to larotrectinib supports widespread genetic testing in patients with advanced cancer to see if they have this abnormality.”