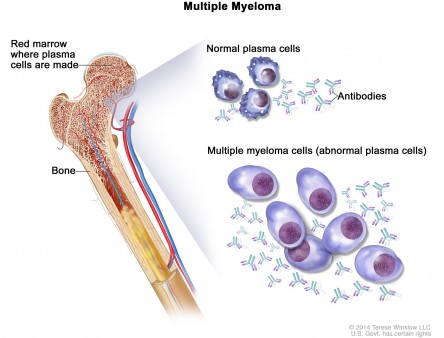 Why do some patients develop multiple myeloma while for others the disease progresses slowly, or not at all?

People diagnosed with precursor conditions that often lead to multiple myeloma currently have little way of gauging their risk of myeloma or knowing when, if ever, the disease might progress.

At Dana-Farber, a group of researchers led by Irene Ghobrial, MD, are engaged in a study that seeks to answer such questions. The results may eventually help doctors identify individuals who can benefit from treatment to delay or even prevent the progression to symptomatic myeloma.

The study utilizes PCROWD, a bank of blood samples from patients with conditions that can be precursors of blood cancers such as myeloma, leukemia, or lymphoma. PCROWD is a project of the Center for the Prevention of Progression of Blood Cancers at Dana-Farber, which explores how precursor conditions develop and progress to different blood cancers.

The researchers study two precursor conditions of multiple myeloma: Monoclonal gammopathy of undetermined significance (MGUS) and smoldering multiple myeloma (SMM). MGUS is a pre-malignant condition in which an abnormal protein, called a monoclonal protein, turns up in the blood. The protein, produced by a type of white blood cell in the bone marrow called plasma cells, usually causes no health problems, and people are usually unaware they have MGUS until it is diagnosed in a routine blood test. SMM is also characterized by the presence of monoclonal protein in the blood but includes more abnormal cells in the bone marrow. SMM is more likely than MGUS to progress to multiple myeloma, with an annual risk of 10 percent.

There has been scant research into the likelihood that MGUS or SMM will advance to myeloma, largely because MGUS and SMM often go undiagnosed, and many physicians are not sufficiently aware of them. (One study found that 75 percent of patients with SMM develop myeloma within 15 years of diagnosis.) When an individual is diagnosed with either of these conditions, the medical strategy is often “watch and wait” — to defer treatment until myeloma symptoms develop.

“The aim of our study is to understand why some patients with SMM go on to develop multiple myeloma, and why others show no symptoms of myeloma for years, and sometimes forever,” says Dana-Farber’s Mark Bustoros, MD, who is helping lead the study with Ghobrial. He presented the results of the largest genetic analysis of SMM patients at the 59th annual meeting of the American Society of Hematology.

Bustoros and his colleagues are genetically analyzing bone marrow and blood samples from nearly two hundred people with SMM. For many of these individuals, two sets of samples are taken—one, when they’re diagnosed with SMM, and another if they develop multiple myeloma. By comparing the genetic mutations in the two sets of samples, researchers hope to identify mutations that drive the progression of this precursor condition to symptomatic multiple myeloma. Their findings could lead to a prognostic model that can be used in the clinic for determining which individuals with SMM are likely to develop myeloma, and how quickly.

Ultimately, their findings could pave the way for providing earlier treatment to slow or prevent the development of myeloma in people at greatest risk for the disease.

This article was originally published on February 21, 2018, by Dana-Farber Cancer Institute. It is republished with permission.