Denise Delatorre became one of the first people in the country to receive the cutting-edge cancer treatment called CAR-T therapy.

In December 2015, at age 56, Denise Delatorre, was sent home to die. The Southern California real estate agent had non–Hodgkin lymphoma, which forms in the lymphatic system, where immune white blood cells are made. The 32 tumors spread throughout her body hadn’t responded to multiple rounds of aggressive chemotherapy.

But she didn’t die. Today, she is thriving, thanks to a new kind of “living drug” that reprograms a person’s own disease-fighting T cells to attack cancer. Admits Delatorre, “I shouldn’t even be talking to you right now.”

Delatorre had gone to her ob-gyn complaining of excruciating back pain, night sweats, bloating, indigestion and a lump around her midsection. She worried it was ovarian cancer. But her doctor dis­missed the lump as fat and blamed her other symptoms on menopause.

Delatorre insisted on further tests. Even the ultrasound technicians gave her the all-clear—until she directed their instrument to the mass near her stomach. “Once they moved the wand over that lump, their expressions turned to ash,” she recalls. A few days later, an oncologist examined her and noticed a new lump on her neck.

The diagnosis: diffuse large B-cell lymphoma, the most common type of non–Hodgkin lymphoma. It had spread through her lymph system. Other specialists confirmed the awful news. To cope, Delatorre checked herself into a weeklong holistic healing retreat. But the pain from the new neck tumor was so intense that she cut the retreat short after three days and returned home to start chemotherapy.

She was optimistic. Her cancer was treatable and had a 60% remission rate. She underwent four rounds of out­patient chemotherapy with a four-drug cocktail, which she tolerated well. She devoted herself to eating healthier and reducing stress. But she achieved only partial remission, which meant going at the cancer even harder.

The next treatment required checking into a hospital for a week to add a fifth drug to the cocktail, administered in two consecutive 96-hour infusions. She worked on real estate deals from her hospital bed, wearing fuzzy pajamas, as her 21-year-old son, Ricki, delivered meals to her room. “I went through it like a champ,” she says. 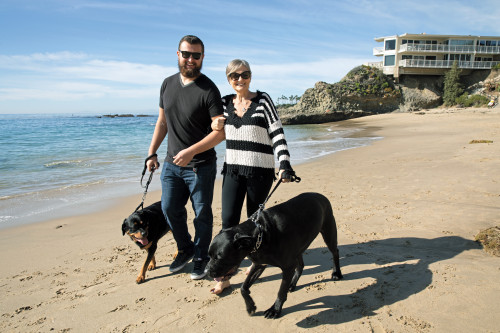 But the day she got the scan results was devastating. Her oncologist couldn’t look her in the eye. “This is the part of my job that I hate,” her doctor said. “You have six months to live. Make plans.” Delatorre drew on inner strength that came from her faith. “I believe in God, and where there’s God, there’s hope,” she told her doctor. “I’m going to keep fighting this disease until there’s no more hope.”

First thing, she broke the news to Ricki. “I said the therapy didn’t work, and I’m going to die,” she recalls. “We just held each other and cried.” Delatorre is a single mom, and she and Ricki have little family support on the West Coast. She’d be leaving him all alone if she died, and she felt like a failure as a parent.

But she didn’t give up. She recalled a Los Angeles Times article a client had sent her a few months earlier about a clinical trial for an experimental treatment called CAR-T. At the time, she assumed chemotherapy would work for her, but now, the news provided a beacon of hope.

She called the National Cancer Institute and learned that two LA-area hospitals were enrolling patients. One had its slots already filled. But the UCLA Health trial, run by oncologist John Timmerman, MD, was still open. He’d been researching lymphoma immunotherapy for decades, with early support from the Damon Runyon Cancer Research Foundation.

Timmerman answered the phone. Delatorre argued her case. Yes, she qualified, he soon determined, and the timing was perfect. But she was running out of time. When new tests showed that her cancer had advanced so rapidly that she had only a few months to live, not six, she skipped to the front of the line.

T cells were collected from her blood and genetically engineered to express a synthetic protein called a chimeric antigen receptor, or CAR, on their surface. This modi­fication would allow them to target and destroy her cancer cells. It took 17 days to grow the hundreds of millions of new cells she needed. By the time Delatorre showed up for her infusion, her cancer had already spread to her spine. “It was very clear that the disease was sort of galloping along,” says Timmerman. “The therapy came just in the nick of time.”

The results were miraculous. “Within six weeks, the 32 tumors had gone down to six, and then the six to three, and then the three to two, then the two went down to one,” Delatorre says. Today, just one of her tumors remains, and researchers think CAR-T cells in her body continue to fight the cancer. “I am a bionic woman,” she says.

Delatorre, now 60, credits CAR-T therapy with saving her life, along with faith, hope and healthier habits. But she credits cancer with changing her entire perspective. “There are so many components to true healing,” she says, “and one of them is leading a joy-filled life.”

Today, she says she wakes every day grateful to be alive. She finds joy in small things, like hummingbirds visiting her newly installed feeders. She spends less time on social media and more time walking outdoors with her beloved dogs. Financial success holds less importance.

Back when Delatorre was undergoing chemo, a nurse who herself had kicked breast cancer told her that one day she’d see her illness as the best thing that ever happened to her. At the time, she says, “I looked at her like she had five heads.”

But the nurse was right. “It’s the most devastating thing I’d ever been through,” Delatorre says. “It turned my life upside down, and you know what? I will tell you that cancer was the best thing that ever happened to me. We never know how strong we are until being strong is the only choice we have. I’m living in an entirely new world of hope and possibilities.”

It’s still early days for THE CAR-T field. Since 2017, the Food and Drug Administration (FDA) has approved two CAR-T therapies for people for whom other treat­ments have failed. Both are approved for adult non–Hodgkin lymphoma, which Delatorre has, and one is also approved for acute lymphoblastic leukemia in children and young adults. Recent clinical trials have had positive results for multiple myeloma—perhaps the next cancer to get FDA approval—as well as mantle cell lymphoma and chronic lymphocytic leukemia (see "CAR-T for More Cancers"). “I’ve never been so excited, but the challenges are so clear,” says UCLA’s John Timmerman, MD. Among them: