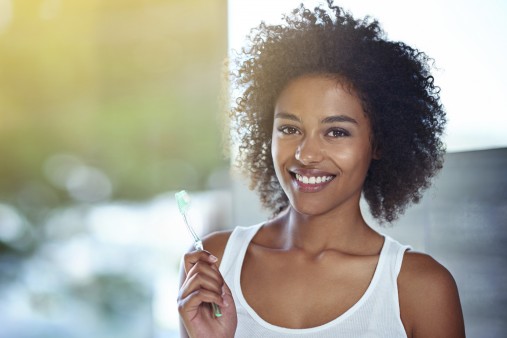 The cavity-preventing benefits of water fluoridation are also a matter of social justice and protection of vulnerable populations, including cancer survivors. Istock (Model(s) used for illustrative purposes only)

Is There Really a Link Between Fluoride and Cancer?

if there were a connection between water fluoridation and cancer, it would be relatively easy to detect scientifically, given the large number of people intentionally exposed to it—but there isn’t.

For decades, some activists have warned of links between fluoride and cancer. But years of research confirm that “there is no reason to believe that fluoride, used in an approved manner, in any way causes disease,” according to Herve Sroussi, DMD, PhD, of the Department of Oral Medicine and Oral Oncology at Dana-Farber and Brigham and Women’s Hospital.

Fluorides are compounds made from the element fluorine and other substances – usually metals, such as tin. Some fluorides occur naturally in the environment, in water, air, and soil, as well as certain plant and animal-based foods. Once ingested, they enter the bloodstream and tend to accumulate in areas high in calcium, such as the bones and teeth.

“Fluoride is by far one of the best approaches, from an evidence-based standpoint, of reducing the risk of dental decay,” Sroussi says. Fluoride strengthens teeth by being incorporated into enamel, the outer layer of the tooth, where it draws in minerals that strengthen the enamel’s structure.

Lack of a Connection to Cancer

Most of the 50-plus population studies exploring the possibility of a link between water fluoride levels and cancer have failed to find a strong connection, according to the American Cancer Society (ACS). The topic is inherently difficult to study, the ACS notes. Comparing cancer rates in a community before and after water fluoridation, or between communities with differing fluoridation levels, is not 100 percent reliable because the groups being compared may differ in respects other than drinking water composition. Comparisons may also be difficult because different jurisdictions may use different types of fluoride, or because residents may have used fluoridated water for different lengths of time or at different ages.

In an examination of numerous large-scale studies of water fluoridation and cancer rates, the International Agency for Research on Cancer found that the studies “have shown a consistent tendency for people living in areas with high concentrations of fluoride in the water to have higher cancer rates than those living in areas with low concentrations.” The agency also noted that the evidence was inadequate to draw conclusions one way or the other. Similar, the National Research Council, in a 1993 report, concluded that “the available laboratory data are insufficient to demonstrate a carcinogenic [cancer-causing] effect of fluoride in animals” and that “the weight of the evidence from the epidemiological studies completed to date does not support the hypothesis of an association between fluoride exposure and increased cancer risk in humans.”

Sroussi notes that if there were a connection between water fluoridation and cancer, it would be relatively easy to detect scientifically, given the large number of people intentionally exposed to it. “Fluoridation is so pervasive around the world that it if had the slightest effect on cancer rates, we’d know it by now,” he remarks. “In regions where drinking water has naturally high levels of fluoride, people tend to get dental fluorosis – staining and softening of the enamel – but don’t show increased cancer rates.”

Fluoride treatments are often prescribed for cancer patients who are at heightened risk of dental problems, Sroussi notes. Some cancer treatments, such as radiation therapy to the head and neck, and certain kinds of chemotherapy, can reduce saliva production and produce mucositis, a condition involving pain and inflammation of the gums and inner lining of the mouth. These patients have an elevated risk of tooth decay, which in  certain cases can progress rapidly. To protect against this, oncologists often prescribe fluoride supplements among other preventive measures to reduce the risk of a potentially rapidly progressing deterioration in dental health.

For Sroussi, the cavity-preventing benefits of water fluoridation are also a matter of social justice and protection of vulnerable populations, including cancer survivors. Noting that people in wealthy areas tend have access to good dental care, he comments that fluoridation is one of the best public-health measures for reducing dental decay in poorer populations.

This article was originally published on December 28, 2017, by Dana-Farber Cancer Institute. It is republished with permission.