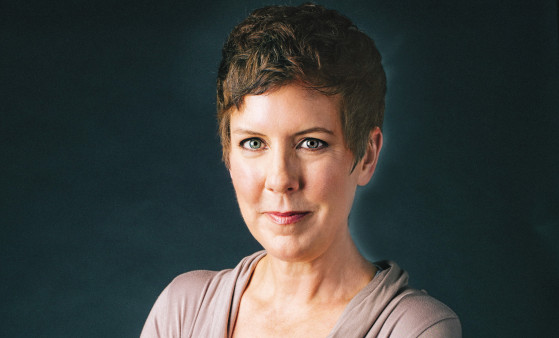 In this excerpt, a nurse talks with Guthrie, her mother and Guthrie’s partner, Mary, in the hospital room after her double mastectomy.

The nurse reached deep into the bottom of her cart and returned to my bedside with two cottony white footballs. She tugged open the neckline of my camisole and began to stuff one of the footballs into place. As she pushed and pulled, my arms braced against the bed.

She drew back, parked her hands on her hips. “Most ladies won’t leave the hospital without their breast forms,” she said.

“Well, I’ll just leave ’em here at the foot of the bed, and you can take ’em on home,” said the nurse. “You paid for ’em so you might as well keep ’em.” I got the feeling she wasn’t the kind of woman who liked leaving a job half done, but she seemed to know she was outnumbered and left the room.

When we could no longer hear the rattling of the cart and the squeak of her shoes in the hall, we exhaled. I want to say the three of us shared a much-needed laugh, that my mom squinted her eyes and leaned her head back, covering her open-mouthed giggle with her hand. I want to say that Mary let out one of her spirited “ho-HOs,” the sound of delight and surprise she often made before doubling over in laughter, but instead my memory is clouded by the strangeness of the moment.

Staring at the breast forms at the foot of the bed, I couldn’t stop thinking about how they were three times bigger than the peach-sized breasts I’d sacrificed the day before. How the mastectomy nurse, like the breast surgeons, hadn’t paused to ask me how I wanted to present my body to the world, but moved on auto-pilot to return their definition of femininity to my now gender-ambiguous chest.

A week later, I read Audre Lorde’s account of her mastectomy in 1978. On the day after her mastectomy, Lorde, a poet and breast cancer activist, was visited by a “kindly woman” who offered her “a very upbeat message and a little prepared packet containing…a wad of lamb’s wool pressed into a pale-pink breast-shaped pad.” Of the scene, she wrote: “Breast prostheses are offered to women after surgery in much the same way that candy is offered to babies after an injection.”

I was struck by how little had changed in thirty years. How little space women were given for mourning. How strong the medical community’s insistence was that a woman’s body conform.