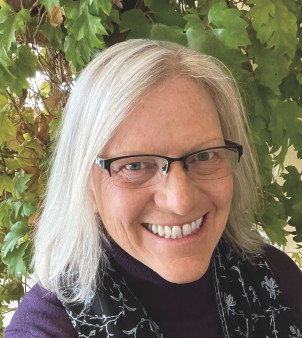 In 2008, I had everything going for me: a busy and successful ob-gyn practice, a precocious 9-year-old daughter and a well-used passport from traveling all over the world with my family to attend conferences, with a liberal dose of vacations on the side. When I was diagnosed with Stage II breast cancer that April, I was treated with a bilateral mastectomy and four months of IV chemotherapy. I considered it a bump in the road. I moved on.

For five years, breast cancer was something I put in the “past medical history” section of forms. Even when I developed sudden back pain, I never thought it could be breast cancer again—maybe a pulled muscle or a herniated disc but not what it turned out to be: metastatic breast cancer (MBC) in virtually every bone in my body, with a fractured vertebra and an about-to-break left femur. I was diagnosed in 2013, on my 53rd birthday.

I have been extremely lucky. After an unconventional 14-month course of combination IV chemo and a bisphosphonate (for bone metastasis), followed by a more conventional aromatase inhibitor, I have remained NEAD—no evidence of active disease—since April 2014.

Neuropathy from the chemo, however, cost me my career. The numbness in my hands wasn’t going to go away, I realized, yet as an ob-gyn, my ability to palpate lumps, skillfully wield a scalpel or catch a baby depended on my hands. It was no longer safe for me to see patients. My entire identity was wrapped around being a doctor and a mom, and my daughter was approaching college and needing me less. I was adrift, questioning whether I even deserved to take up oxygen on this planet.

Thankfully, I found a new purpose in advocacy. I attended patient-focused conferences and realized I could use my medical background to gather information about MBC, translate it into patient-friendly terms (a skill I honed in my 25 years of practice) and disseminate it through my growing social media presence. I went to major conferences, met researchers and oncologists and began partnering with them as a research advocate.

In 2015, I discovered METAvivor and embraced their mission to raise research money to benefit people with metastasized breast cancer. I hosted a fundraiser stop on the first Sea to Sea for MBC Advocacy tour and, in 2019, joined the board of directors. I became a member of the Metastatic Breast Cancer Alliance, a Susan G. Komen Advocate in Science, a helpline volunteer for Living Beyond Breast Cancer and Imerman Angels, and a grant reviewer for the Department of Defense’s Breast Cancer Research Program and several nonprofits.

Sometimes we have to reinvent ourselves when life throws us curveballs. The feelings of worthlessness I felt when my career as an ob-gyn was stolen by MBC have been replaced with a sense of pride and accomplishment in what I can do as an advocate. I may not be saving lives with my scalpel, but I am making a difference in the lives of people with MBC.

And, it turns out, even 22-year-old college grads still need their mom.