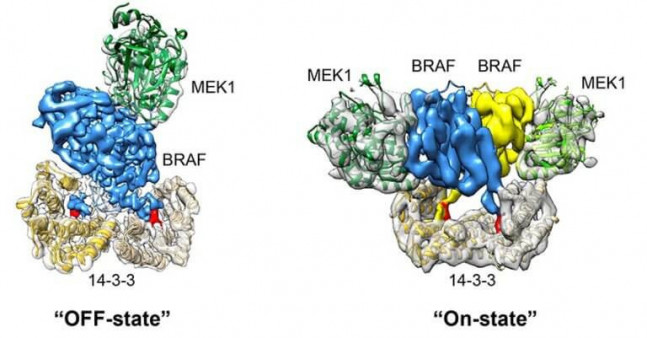 BRAF in its “off-state” and “on-state.” Dana-Farber researchers were able to visualize the on-state through the use of a cryo-electron microscopy. Courtesy Dana-Farber Cancer Institute

New insights may help scientists develop better drugs to intervene in cancers, such as melanoma and thyroid cancer

Scientists have captured the most complete picture yet of a key molecular switch that is sometimes jammed in the “on” position in cancers.

With the aid of recent advances in a tool known as cryo-electron microscopy, which can obtain crisp 3D images of large biological molecules, Dana-Farber researchers were able to visualize the switch, made up of a cancer-driving protein called BRAF combined with two other proteins. Scientists were able to see the switch in its normal off-position and its activated on-position.

The new insights may help scientists develop better drugs to intervene in cancers, such as melanoma and thyroid cancer, caused by oncogenic mutations in the BRAF protein.

A report describing the findings was recently published in Nature. The co-corresponding authors are Michael J. Eck, MD, PhD, and Hyesung Jeon, PhD, both of the Department of Cancer Biology at Dana-Farber and the Department of Biological Chemistry and Molecular Pharmacology at Harvard Medical School (HMS).

BRAF is a critical regulator of the MAP kinase molecular pathway, which carries signals to the nucleus of cells and controls their differentiation, proliferation, and survival. When BRAF is mutated, the MAP kinase pathway may become chronically overactivated, continually sending signals that trigger cancerous cell growth and tumor formation.

Mutated BRAF can be a factor in melanoma; thyroid, colorectal, and non-small cell lung cancers and pediatric brain tumors.

Until now, the structural changes associated with BRAF’s on and off status had been poorly understood, and never visualized in such a comprehensive manner.

“People had poked and prodded BRAF for more than 30 years, but we could only see parts of it,” says Eck, who is professor of Biological Chemistry and Molecular Pharmacology in the Blavatnik Institute at HMS and the Department of Cancer Biology at the Dana-Farber.

Critical parts of the experiments were carried out at the Harvard Cryo-Electron Microscopy Center for Structural Biology, a joint venture by HMS, Dana-Farber, Boston Children’s Hospital, and Massachusetts General Hospital.

The cryo-electron microscopy experiments revealed the precise positions of the BRAF protein in a complex with two other proteins, one known as 14-3-3 and the other a protein called MEK, the next protein in the MAP kinase pathway and also an important drug target. In the switch’s inactive state, MEK is located atop BRAF and 14-3-3 is underneath it. This configuration prevents BRAF from binding with other BRAF molecules, keeping the switch turned off. But when an incoming cell signal reaches the complex, 14-3-3 swings aside, exposing a region of BRAF that causes the complex to migrate to the cell membrane, where BRAF becomes activated, in turn releasing MEK to send its cell growth-promoting signal.

The visualizations obtained by the scientists also revealed how genetic mutations can disrupt the normal activation process, causing the BRAF switch to be jammed in the on position, potentially leading to cancerous growth.

“In the long term, a deeper understanding of BRAF regulation should aid in the development of more effective and better-tolerated therapeutics for Raf-driven cancers,” the scientists say.

This article was originally published on January 8, 2020, by Dana-Farber Cancer Institute. It is republished with permission.