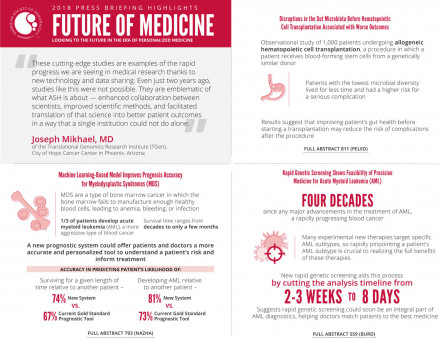 Studies Offer Glimpses into the Future of Medicine for Blood Cancers

December 2, 2018 • By American Society of Hematology

Today during the 60th American Society of Hematology (ASH) Annual Meeting and Exposition in San Diego, presenters of three studies will highlight how recent technological developments are translating into clinically relevant advances for hard-to-treat blood disorders.

“These cutting-edge studies are examples of the rapid progress we are seeing in medical research thanks to new technology and data sharing,” said press briefing moderator Joseph Mikhael, MD, of the Translational Genomics Research Institute (TGen), City of Hope Cancer Center in Phoenix, Arizona. “Even just two years ago, studies like this were not possible. They are emblematic of what ASH is about — enhanced collaboration between scientists, improved scientific methods, and facilitated translation of that science into better patient outcomes in a way that a single institution could not do alone.”

These studies focus on ways doctors can use genetic and clinical information to gain patient-specific insights. One applies machine learning techniques to improve the tools doctors use to determine the prognosis of patients with myelodysplastic syndromes. Another study uses rapid genetic screening to match patients diagnosed with acute myeloid leukemia with targeted therapies. A third study suggests focusing on the health of the microbiome to help improve outcomes for patients undergoing hematopoietic cell transplantation.

Researchers used machine learning — a technique for automating the creation of computer models — to develop a new system to predict how long patients with myelodysplastic syndromes are likely to live. In tests, the system outperformed the current gold standard prognostic tool, suggesting the new model could offer patients and doctors a better and more personalized tool to understand a patient’s risk and inform treatment.

Myelodysplastic syndromes are a type of bone marrow cancer in which the bone marrow fails to manufacture enough healthy blood cells, leading to anemia, bleeding, or infection. Patients diagnosed with myelodysplastic syndromes show a wide range of symptoms and may live for only a few months or for decades. About one-third of patients develop acute myeloid leukemia (AML), a more aggressive type of blood cancer.

Predicting a patient’s risk of dying or developing AML is crucial, both to help patients understand their disease and to help doctors determine a course of treatment. High-risk patients are generally treated with a stem cell transplant, which can cure the disease but carries significant risks, while other, less risky, treatments are recommended for patients with a better prognosis. The best course of treatment for patients at intermediate risk can be unclear because individual clinical trials define risk thresholds in different ways.

“All treatment guidelines are driven by risk, which means that if we get the risk wrong, we get the treatment wrong,” said lead study author Aziz Nazha, MD, of the Cleveland Clinic. “Improving and personalizing our prognostic models can help to delineate patients who are at higher versus lower risk — which is particularly challenging for those who fall into the intermediate range — and match them with the appropriate treatment.”

Currently, doctors use the Revised International Prognostic Scoring System (IPSS-R) to assess risk for patients with myelodysplastic syndromes. However, the IPSS-R underestimates or overestimates risk in up to one-third of patients, according to Dr. Nazha.

Like any decision-support tool, the model is intended to inform human clinicians, not to replace or compete with them, Dr. Nazha said. To further improve the model, the researchers are gathering feedback from clinicians and working to incorporate more outcomes, such as quality of life, into the model. They are also developing ways for the model to update the assessment of risk in response to changing conditions, such as when new test results are available or treatments are completed.

“This project started out of a frustration voiced by many of my patients who want to know what their own risk is and how their prognosis might differ from that of other patients,” said Dr. Nazha. “We wanted to build a personalized prediction tool that can give insights about a specific outcome for a specific patient.”

A new study demonstrates it is feasible — and helpful — for doctors to determine which molecular subtype of acute myeloid leukemia (AML) a patient has before beginning treatment and to use this information to pick an approach that best matches the individual. The results show that using patient-specific information to guide treatment decisions, an approach known as precision medicine, is possible even for patients with blood cancers that must be treated urgently.

Because AML is a rapidly progressing cancer, treatment is typically started on the day of diagnosis and physicians have been reluctant to wait the two to three weeks that it typically takes for genomic analysis. This leaves doctors with little time to learn which AML subtype the patient has, so in current practice, all patients are given the same treatment regimen.

However, in this study, researchers demonstrate the ability to determine AML subtype based on genetic analysis of blood samples in seven days or less. The findings suggest rapid genetic screening could soon be an integral part of AML diagnostics, helping doctors match each patient with the therapy best suited for his or her specific disease.

The results represent the first findings from the Beat AML study, a multi-arm, multi-site collaborative trial designed to test precision medicine approaches for improving the generally poor prognosis among patients with AML. In recent years there have been renewed efforts to improve the standard treatment for AML, which has not significantly advanced in about four decades. Many experimental new therapies target specific AML subtypes, so the ability to determine a patient’s AML subtype is crucial to realizing the full benefits of these therapies, said lead study author Amy Burd, PhD, vice president for research strategy at The Leukemia & Lymphoma Society (LLS).

The reported findings include data from 365 patients over age 60 with suspected or confirmed AML who enrolled in the study from November 2016-2018. The researchers applied three genetic analysis techniques — cytogenetics, polymerase chain reaction (PCR), and next-generation sequencing — to patient samples to create a genetic profile of each patient’s disease. Sixty-six patients were removed from the study because they turned out to not have AML upon laboratory analysis.

To date, 146 patients have continued on to the study’s second phase, in which they were treated on a clinical trial for experimental AML therapies targeting their disease subtype. The remaining patients did not continue on to the study’s second phase for a variety of reasons, including choosing standard AML therapy after molecular profiling, enrolling in a different trial, or deciding not to pursue therapy. Waiting for a few days to start therapy after receiving a diagnosis also gave patients time to make informed decisions about their therapy, something the former approach did not allow. “This supports a patient-centric approach,” said Dr. Burd.

The study is designed to incorporate new experimental therapies as they are developed. Having started in 2016 with three treatment arms, the study has now grown to include 11 arms testing therapies developed by seven different pharmaceutical companies. Initial results from some of these studies suggest patients benefit from therapies specifically chosen based on their individual disease subtype.

“I think the future of treatment for AML will include point-of-care screening to determine what type of AML the patient has and then make the treatment decision based on that information,” said Dr. Burd. “Being able to do genetic screening rapidly and efficiently is critical to making a decision for that patient within seven days. This study demonstrates that the precision medicine approach is feasible and effective.”

A new study reports the likelihood of complications from a hematopoietic cell transplantation (HCT) is higher if a patient has lower diversity of microbes residing in the gut before beginning the transplantation process. While previous research has shown a similar relationship between outcomes and gut microbial composition shortly after transplantation, this new study suggests that the association starts even before patients begin transplantation.

HCT is a procedure in which a patient receives blood-forming stem cells from a genetically similar donor. This approach is often used to treat aggressive blood cancers, but it can be associated with severe complications such as graft-versus-host disease (GVHD), a serious and potentially life-threatening complication that occurs when the donated immune cells attack the patient’s cells as foreign tissue.

Although the study is observational and doesn’t show cause and effect, the results suggest that it may be possible to reduce patients’ risk of complications by taking steps to improve the health of their gut microbiota before beginning HCT, according to researchers.

The billions of bacteria and other microbes that live on and within our bodies play an important role in maintaining healthy bodily functions. The study, conducted in the United States, Europe and Japan, found patients set to undergo HCT had gut microbiota that was 1.7- to 2.5-fold lower in diversity compared to healthy volunteers. The microbial communities in the majority of the patients’ guts went on to be dominated by a single bacterial species.

The study compared stool samples from nearly 1,000 patients undergoing allogeneic HCT to those of healthy volunteers. While microbial composition, which depends to some extent on diet and environment, showed some variation from place to place, the diversity and types of microbes found in the stool of transplant patients in all countries was markedly different from those of the healthy volunteers. Further analysis showed this low diversity was associated with lower calorie intake, the use of broad-spectrum antibiotics, and the use of higher-intensity conditioning drugs to clear cancer cells from the body before transplantation.

Patients with the lowest microbial diversity showed lower overall survival and a higher risk for GVHD.

“Before we approve patients to receive a transplant, we do many tests to make sure all of their organs are in good working order,” said lead study author Jonathan U. Peled, MD, PhD, of Memorial Sloan Kettering Cancer Center. “In the future, we envision that the health of the gut microbiota — which some have called the ‘forgotten organ’ — may become part of this whole-body evaluation. It might also be possible to intervene and repair the microbiota in the pre-transplantation period.”

This press release was originally published on the American Society of Hematology website on December 2, 2018. It has been lightly edited. 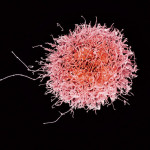