The starting age was lowered due to an increase in colorectal cancer among younger people.

People at average risk should start colon cancer screening at age 45 instead of 50, according to a draft recommendation from the U.S. Preventive Services Task Force (USPSTF). The task force noted that both stool blood tests and direct examination (for example, colonoscopy) have been found to reduce mortality.

“Unfortunately, not enough people in the U.S. receive this effective preventive service that has been proven to save lives,” task force chair Alex Krist, MD, MPH, of Virginia Commonwealth University School of Medicine, said in a statement. “We hope that this recommendation to screen people ages 45 to 75 for colorectal cancer will encourage more screening and reduce people’s risk of dying from this disease.”

African Americans are especially likely to develop colorectal cancer at a younger age, a disparity brought home by the recent death of “Black Panther” actor Chad Boseman from colon cancer at age 43. 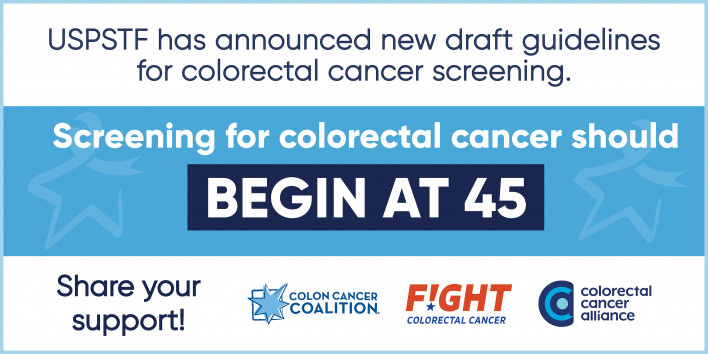 The younger starting age in the proposed USPSTF recommendation brings it in line with that of the American Cancer Society, which lowered its recommended age for screening from 50 to 45 in June 2018. Lowering the age to 45 makes some 20 million Americans newly eligible for screening.

The USPSTF recommendation to screen people between ages 45 and 49 received a B grade, meaning there is good evidence that it offers moderate benefits that outweigh the harms or moderate evidence of substantial benefits. The recommendation for people ages 50 to 75 continues to carry an A grade, meaning high certainty that it offers substantial benefit.

This grading is important because Under the Affordable Care Act, private insurance and Medicare are required to cover preventive services with an A or B rating with no co-pay or out-of-pocket costs. This requirement will not go into effect until the draft recommendation is finalized, which typically takes about six months after the draft is released.

For people ages 76 to 85, the net benefit of screening everyone in this age group is small. However, screening could be appropriate in certain cases, depending on a person’s overall health and prior screening history. The task force says this should be an individual decision based on doctors’ judgment and patients’ preference. This recommendation carries a C grade.

These recommendations apply to adults without symptoms who do not have a personal history of colorectal polyps (abnormal growths that can progress to cancer) or a personal or family history of genetic disorders that increase the risk of colorectal cancer. Such people may need to start screening even earlier and repeat it more often.

The USPSTF did not recommend a specific screening method or interval.

“There are many tests available that can effectively screen for colorectal cancer,” said task force member Martha Kubik, PhD, RN, of George Mason University. “We urge primary care clinicians to discuss the pros and cons of the various recommended options with their patients to help decide which test is best for each person.”

The first two tests detect blood in the stool, while the third looks for DNA changes associated with colon cancer. Visual examination involves viewing the inside of the colon to look for polyps or other abnormalities. A colonoscopy uses a flexible lighted instrument to view the entire colon, while a sigmoidoscopy views the lower part of the colon and rectum.

Colonoscopy and sigmoidoscopy require advance bowel preparation and may be done under sedation. Stool-based tests, which analyze a sample collected at home, are not as accurate, but some people are more likely to get them done. People with positive results on any of the other tests should receive a follow-up colonoscopy.

In its review of the latest evidence, the task force—an independent volunteer panel of national experts in prevention and evidence-based medicine—identified new research since its last review in support of the 2016 recommendation.

While a growing body of evidence shows that fecal blood tests and colonoscopies are both associated with reduced colon cancer mortality, their effectiveness can’t easily be compared across studies of different methods. There is less evidence for an approved blood screening test, and the panel found only a single small study of a urine test for colon cancer.

Overall, the experts concluded, “among effective screening modalities, the specific modality (or modalities) used is less important than participation in screening.” The recommendation particularly encourages clinicians to discuss colon cancer screening with their Black patients.

“This is not the end of the road for colorectal cancer prevention—in fact, this is far from it. Many people are diagnosed before the age of 45,” said Colorectal Cancer Alliance CEO Michael Sapienza. “But today’s draft recommendation by the USPSTF signals a change in the understanding of this disease and what needs to be done to eradicate it.”

The draft recommendation is open for public comment until November 23. Comments may be submitted on the USPSTF website or through the advocacy groups.