The entire brain processes music, giving it the power to influence mood and memory and making it a powerful therapeutic tool.

There is evidence that music can be a powerful therapeutic tool: it has been shown to bring about positive changes in mood and reduce anxiety, among other benefits. For cancer patients, music and music therapy—the clinical use of music as a tool to help achieve treatment goals—can also be used to develop positive coping skills that come with a cancer diagnosis.

The way we process music is what gives it its therapeutic power. Unlike most other things, music is not processed in just one specific lobe of the brain. Rather, the entire brain processes music when it plays—giving it the power to influence all aspects of our life, from mood to memory.

“Everyone has that song that speaks to them,” says Heather Woods, manager of expressive arts therapies at the Leonard P. Zakim Center for Integrative Therapies and Healthy Living at Dana-Farber. “I want my patients to capture this feeling and use it to manage pain, anxiety, as well as improve their quality of life.”

Here is why and how five patients used music—from the songs of Forrest Gump to P!nk— to help them get through their diagnosis and treatment.

Leanna House, who works as a grant management specialist in the business office of pediatric oncology at Dana-Farber, was 33 years old when she was diagnosed with breast cancer in 2016. The news carried an extra weight: House lost her mother to breast cancer 18 years earlier.

During her treatment, House was constantly looking for distractions, and she found exactly what she was searching for in her favorite artist: P!nk. In particular, House felt a special connection to the song “I’m Not Dead.”

“The line that stands out is, ‘I’m not scared, I’m just changing,’” explains House. “Change can be scary, but it doesn’t have to be. It can also mean growth.”

In July 2018, Kathleen Barton finished her last round of oral chemotherapy. This was a big milestone for Barton, who was diagnosed with acute promyelocytic leukemia (APML) in 2016.

Due to her aggressive treatment plan, Barton’s received inpatient care for 45 days. To get through it, she relied heavily on a gift from her sister—a Bluetooth speaker. It played three playlists around the clock to keep her calm and remind herself of her favorite memories.

“I had what I called my Forrest Gump mix,” Barton says. “My family listened to a lot of oldies growing up, and aside from being great songs, the playlist put me in a good mood because it reminded me so much of my childhood.”

Barton also set a variety of songs as alarms to remind her to stay active. She used Ingrid Michaelson’s “Girls Chase Boys Chase Girls” as a not-so-subtle hint to get up and walk around.

In 2015, 30-year-old Michael Melia was diagnosed with testicular cancer. Music had always been a major part of Melia’s life; he grew up playing the guitar and had even played in a few bands. So, when it came time to begin his treatment, he made sure to bring his headphones to every session.

“Music helped pass the time when I was too tired to even watch TV,” he says. “I was able to find peace in the melodies and added encouragement in the lyrics.”

Melia found a deep connection to the central themes of resilience and survival in “Baroness” by Chlorine & Wine, which was released shortly after the band got into a serious bus accident. Another favorite of his was Lucero’s cover of “I’m in Love With a Girl,” originally by Big Star—his wedding song. Melia found himself playing it as an ode to his wife, a reminder of how supportive and caring she had been through it all.

Jess Moran was just six days away from her 25th birthday when she was diagnosed with acute lymphoblastic leukemia (ALL) in 2014. During her bone marrow biopsy, she found her fight song.

“I’m not sure why, but during the procedure I randomly started singing ‘Halo’ by Beyoncé,” she recalls. “I would then sing that song over and over again to help me get through everything.”

In addition to serving as the processional song at her wedding, “Halo” was also the first song on one of Moran’s two playlists: Procedure Pump Up and Sunshine Days. Moran created the second playlist to make her happier on days when she could not go outside.

In 2018, Jess Skyleson, then 39, was diagnosed with endometrial and ovarian cancer. Before her diagnosis, she was already using meditation and sound therapy for mental and physical healing purposes. It became part of her daily routine as she prepared for treatment.

“I have a singing bowl that I would use during meditation, before my tests and chemotherapy appointments. My wife and I also would sing songs together, specific to our meditation practice, while I underwent treatments. This helped me get mentally prepared and feel connected to the world around me.”

Skyleson says she also enjoyed the soundtrack from the movie The Village. In this case, she didn’t find a connection with the songs themselves—instead, they reminded her of one of the movie’s major plot twists: in the end, the audience discovers the monsters are not so scary after all.

This article was originally published on February 5, 2019, by Dana-Farber Cancer Institute. It is republished with permission. 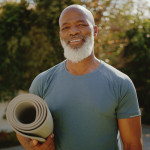