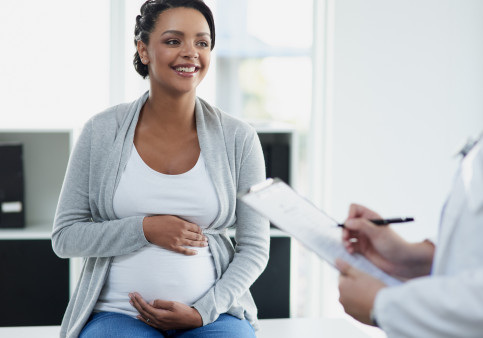 Women who carry inherited BRCA gene mutations can safely become pregnant and give birth after treatment for breast cancer, according to study results presented at the American Society of Clinical Oncology annual meeting this week in Chicago.

Women with harmful BRCA1 or BRCA2 mutations have a much higher risk for breast and ovarian cancer. Around 70% will develop breast cancer during their lifetime, according to the American Cancer Society, and they are more likely to do so at a younger age, when they may still wish to have children.

Pregnancy is a potential concern for women with breast cancer because changing hormone levels can promote cancer growth. A majority of breast tumors are hormone-receptor-positive (HR-positive), meaning they carry receptors for estrogen or progesterone; treatment typically includes drugs that interfere with the production or action of these hormones. Women with harmful BRCA mutations have additional concerns, including the decision about whether to undergo prophylactic ovary removal to prevent the development of ovarian cancer.

Matteo Lambertini, MD, PhD, of the University of Genoa in Italy, presented findings from the largest study to date looking at the safety of pregnancy in women with harmful BRCA mutations who have had breast cancer.

This retrospective hospital-based cohort study included 1,252 women age 40 or younger who were diagnosed with invasive early breast cancer (Stages I to III) at 30 centers worldwide between January 2000 and December 2012. Of these, 811 had BRCA1 mutations, 430 had BRCA2 mutations and 11 had both. Women diagnosed with metastatic (Stage IV) breast cancer or concurrent ovarian or other cancers were excluded.

During a median follow-up period of eight years, 195 women, or 16%, became pregnant. Pregnancies occurred at a median age of 35.7 years and a median 4.5 years after breast cancer diagnosis. Women who became pregnant were younger on average (age 30 versus 35), were more likely to have HR-negative tumors and had less advanced disease with smaller tumors and less lymph node involvement. More than 90% in both groups had HER2-negative cancer.

Among the women who became pregnant, 82.1% conceived naturally, and 17.9% used assisted reproductive technology. Twenty women (10.3%) had miscarriages, and 16 (8.2%) had induced abortions. Among the women who continued their pregnancies, 150 (76.9%) gave birth—including 20 who had twins—and seven (3.6%) were still pregnant at the time of the analysis.

More than 90% of the women had full-term pregnancies. Thirteen (11.6%) experienced delivery complications. Among the 170 babies, just two (1.8%) had reported congenital anomalies. Two thirds of the women did not breast-feed their infants.

In a case-control analysis comparing women who did and did not become pregnant, pregnant women had a higher disease-free survival rate, meaning they were still alive without their cancer worsening or recurring. The difference was not statistically significant overall, meaning it could have been driven by chance, but it was significant for the subgroup with BRCA1 mutations. Conversely, pregnant women with BRCA2 mutations appeared to do worse. Women who became pregnant had more local cancer recurrences but fewer distant recurrences. The pregnant group also had fewer new cases of ovarian cancer and other types of cancer. Overall survival did not differ between the two groups.

Based on these findings, the researchers concluded, “No detrimental effect of pregnancy on disease-free survival and overall survival was observed,” particularly in women with BRCA1 mutations. They added, “Fetal and pregnancy complications appeared similar to those of the general population.”

Lambertini said these findings provide reassurance when counseling young women with BRCA mutations about the feasibility and safety of future conception.

However, Ellen Warner, MD, of Sunnybrook Health Sciences Center in Toronto, cautioned that these findings may be biased by the fact that women who were found to have more advanced cancer may have been more likely to decide to forgo pregnancy.