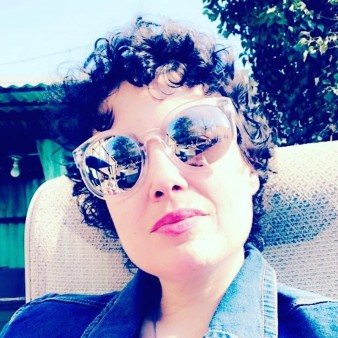 So already I wrote about how I am not an exhibitionist, but now I know you won’t believe me as I had the honor of meeting London-based photographer Sophie Mayanne who is famed for her project “Behind the Scars.” She has photographed someone I consider my girl crush, Deborah James (or Bowel Babe on Instagram, who seriously I cannot get enough of her Instagram stories and photos you must follow her immediately if you do not already and also follow Sophie, too).

Well, it was through Deborah and on Instagram that I first noticed Sophie and her work. She tastefully captures folks with various scars, some from cancer, some from burns, some from surgeries, some from self cutting—she is a master at getting to the essence of a person and telling their story to a large audience and really embracing the idea of loving the skin you are in.

For me, this is huge. I really am lucky to have not had body issues ever in my life—aside from when I was a teenager and hated myself but all of the other girls I knew did, too, so it seemed “normal.” I thought I was heavy and really just stewed about it for a bit in grammar and early high school but then didn’t give a f$&k anymore and still ate my donuts and junk food but still maintained my 135-pound weight.

I slowly crept up, which I talk about here, but I did not register it because my clothing size was the same. Despite pregnancies, which led to stretch marks (my daughter—I was over 200+ pounds with her and everyone thought I had twins or triplets but no, it was just her), and then with my son’s pregnancy, during which I did not gain much weight but instead got another mark on my body. He would not flip so his head was by my heart the entire pregnancy (fun, NOT). He was a c-section birth, which resulted in my first real scar across my pubic bone line below my underwear. This scar looked like a smile and just began to fade within the last few years.

For years after his birth, that scar hurt and bothered me physically—like it hurt. I would put vitamin e on it, when I remembered, but it just was not that big of a deal to me and it was really hidden. Then, a few years later, I had a cyst growing under my skin that needed to be removed from my right hip bone. At my follow up visit, the doctor offered a cream that would be really expensive because insurance did not cover it but would remove the scar and I remember telling him, “I am not a bikini model, I do not think this scar matters.”

He was taken aback; I am working on a post about my weird sense of humor soon. Fast forward just a few years from that minor cyst removal to my breast cancer plot twist. I knew right away in my heart that a mastectomy would be needed. I do not know why I knew this—I mean I could not feel the lump and there was some confusion over how large my tumor was and all that but I just knew it would need to be radical. I did not know how radical until I woke up from surgery and learned the tumor was 5.6 cm and 5/25 lymph nodes were positive for cancer. My surgeon knew I wanted to stay flat (I already wrote about that experience here). My surgeon did a great job of keeping the skin flat and just the line of the scar across my chest. I still had issues looking at my naked body at first. I ballooned during chemotherapy and radiation and that did not help my body image. Oh and I was bald for that all, too.

Then, my hair started to grow back and I learned how important it was for me to get fit (integrative medicine) and started to do all I could to melt the weight off (by sweating and cursing but whatevs) and then I started to not mind looking in the mirror. I began to leave my prosthetic in the closet and embracing my body.

That all being said, I was not sure what that meant to anyone ELSE until I started following Sophie and seeing her Behind the Scars photos. I realized that there are many women who have had this surgery to you know save their lives and that some of them are miserable or feel unsexy or weird and I do not feel that way at all. I feel like, this is just me now.

When Sophie mentioned on Instagram that she was traveling to NYC and looking for models, I signed up immediately. She was so amazing she even accommodated my practically last-minute change so I could still see my daughter’s basketball playoff game! Meeting her and posing for her was empowering still because I do believe it will help others to see me smiling and happy despite my scars or maybe because of my scars—like the saying goes my scars just prove I was stronger than what tried to kill me.

After that photo shoot, my husband and I had a date night in New York City in Little Italy. It was lovely and a great night out but doing all of that last weekend meant this weekend was all about SELF-CARE.

​How do you try to help others deal with their new reality? Do you love your body?