Disclaimer: This is not a peppy post. The only thing uplifting in this leg of my testicular cancer journey is the contents of my stomach.

In the marathon that is chemotherapy, I’m at mile 23 with a leg cramp, dehydration and an extreme desire to just faceplant on the pavement. Because this week has been so tough, I wasn’t able to write as I normally would, so this post was written with the help of my ABSOT editor-in-chief, Katie.

When you think of chemotherapy, you probably don’t exactly equate that with a good time, but if there’s one thing I’ve learned over the two months I’ve had it regularly pumped into my body, it’s that there are different levels of suckiness. Most of the time, I just feel generally ‘off’ but otherwise functional. And at other times, such as this weekend, I vomit so much that rice comes out of my nose.

As I neared the end of my last long week of chemotherapy, I felt tentatively excited. After all, this was (hopefully) the last time I would spend an entire week hooked up to my machine. To make things even better, I wasn’t feeling too bad. A little bloated and reluctant to drink my fluids, but that’s been par for the course for most long weeks.

That all came to a grinding halt on Friday night.

Up until this point, I had never vomited from chemotherapy. The doctors and nurses had warned me that the anti-nausea meds may not be enough to prevent me from losing my lunch from time to time, but I figured I had gotten lucky (or been blessed with a stomach of steel).

As the evening wore on, I felt increasingly sick as the anti-nausea meds I had received earlier that day began to wear off. To make things worse, my throat began feeling weird as well. It’s hard to describe, but it was a blend of an acid reflux feeling and a precursor to feeling like vomit was imminent. All of this combined together came to a head as I rushed to my bathroom. I made it just in time to engage in an intimate conversation with my toilet as I watched my Olive Garden lunch come back up in a more “abstract” form than its original iteration. Gotta say, their breadsticks taste way better going down than coming back up. Much like the soup, salad, and breadsticks, it felt like my vomit was bottomless too.

I’m not sure if there’s a such thing as a “pretty vomiter,” but I definitely am not one. I’ll spare you the details, but let’s just say that I erupt with impressive force, volume, and noise level. Throughout the rest of the night, I alternated lying directly on the floor (which somehow seemed to help — I don’t question these things anymore) and sacrificing to the porcelain god (or a bucket if I couldn’t make it to the toilet in time). Whoever said that chemotherapy is all fun and games was wrong. Just kidding. No one says that.

I woke up on Saturday with an empty stomach and a resolve to keep food down. I was at the point where I was hungry, but I knew that eating whatever I wanted, which was waffles or an omelette, would be a bad idea. So I stuck to the BRAT diet (bananas, rice, applesauce and toast) which is the recommended diet for easing back into food after vomiting.

For the rest of Saturday, I felt marginally better. I ate Jello, canned peaches, toast, applesauces, and various liquids. For the most part, I felt okay. I was hopeful that last night’s vomit party was a one-time occurrence, but alas. As I’ve already foreshadowed, the R in the BRAT diet made a dramatic reappearance that evening. Have you ever shot rice out of your nose? I don’t recommend it.

Sunday tracked largely the same way. I felt okay all day, ate minimal amounts of food and drink, and thankfully rested (this time in bed) for much of the day. As I was getting ready to go to bed, the vomit series decided to become a trilogy. Sigh. I thought I was over this. Luckily, it wasn’t like most third movies and seemed to be the best of the three days…well, as good as vomiting can be.

On Monday, I was scheduled for chemo already, so they brought me in earlier for more anti-nausea meds and hydration. I had lost ten pounds over the weekend (probably mostly in water weight). NP Candace said that the last cycle is always the worst (due to cumulative effects) and I would probably have a few more days of this general feeling. However, each day should be an improvement, with the worst of it hopefully having passed. She was also able to prescribe me stronger anti-nausea medicine for home. I was allowed to have my bleomycin after my bag of hydration and was sent home to rest and hopefully begin feeling better. Unfortunately, as I put the last spoonful of chicken noodle soup from my lunch in my mouth that afternoon, my stomach conducted yet another a forced evacuation of its contents. Can you tell that I’m a little over throwing up?

As much as I’ve tried to stay positive throughout my entire chemotherapy journey, this weekend was by far the worst I’ve ever felt.

I would even take the bone pain from the neupogen shots again. It is frustrating to be so close to the finish line and to be hit with such an extreme setback, but it’s an expected side effect. I know that my body is filled with over 30 liters of various drugs that it’s not used to, so it’s natural for it to be a little mad at me. Nonetheless, throwing up sucks under any circumstance. It REALLY sucks when you have cancer.

I’ve learned that it’s okay to feel negative at times. It’s part of the journey. Despite my bleak mood this weekend, I know that ultimately, chemotherapy is saving my life, so I can’t be too mad when I end up shooting rice out of my nose while I puke. It’s just another one of cancer’s indignities, but I am still trying to find the humor in every situation, no matter how badly I feel.

I’m currently undergoing chemotherapy to cure my cancer. Each Monday, I’ll post my thoughts on this experience. These may be reflections on my prior week’s treatments, musings about my newly-altered life, or anything else that comes into my “chemo brain.” Follow along with all of my posts here. 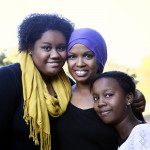