Brett Hoffland—Sharing His Story on KSTP

Welcome to the Band of Ballers! In this series on ABSOT, I’m turning over control to some other ballsy testicular cancer survivors and patients who have inspired me with their work in advocacy and awareness during and after their diagnosis. This month’s feature is all about Brett Hoffland, who shared his story on his work’s TV station. Enjoy!

At 32, cancer was the farthest thing from my mind. Heck, I just got married, bought a house, and got a promotion at work. That’s a lot of big life events crammed into one year! But cancer didn’t care. It was on its way to turn my entire life upside down.

My dog, the ball cruncher

It has happened to all of us guys—getting hit in the junk. You know what comes next—the awful stomach ache that lasts for a few minutes. One day in March 2020, my dog happened to jump on me and it was a direct hit. Cue the stomach pain, and we’re good. 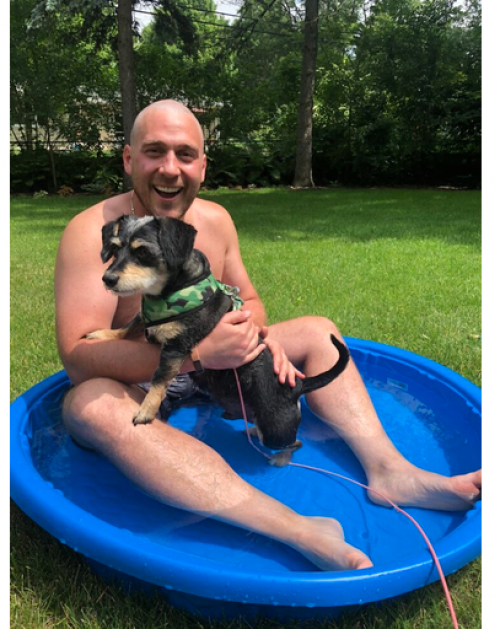 But little did I know I wasn’t good. Fast forward twenty-four hours later, and I realized my left testicle was MASSIVE. I chalked it up to some sort of trauma from the dog incident, but I still messaged my doctor. He said, “Keep an eye on it, and let me know if it doesn’t improve.”

Well, it didn’t. So, I went in to see a urologist. He, too, chalked it up to an injury most likely considering the story, but wanted to do some blood work, just in case. Since he wanted to do this “just in case,” my wife and I were feeling pretty good.

That was until 4am, when my phone went off. It was the results of my blood work. I woke up to see a little chart. If you were in the green you were good. Well my number was so far from that green that I knew right then and there I had cancer without even talking to a doctor yet. Later that morning, the doctor confirmed our biggest fear.

Still, Scooby (my dog) may have saved my life. 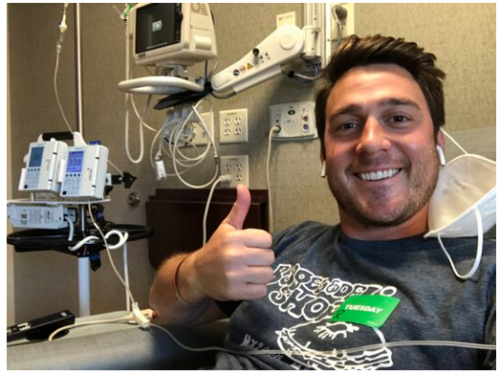 I had the left side orchiectomy surgery to remove the testicle and tumor. My cancer was defined as stage 2a so the potential to spread was real. We prepared to have lymph node surgery to reduce that risk of spreading, and just waited for the tumor marker blood levels to drop. And they did!

I had blood draws every two weeks and was feeling good. Finally, we were headed to surgery. But, then on the last blood test, the marker levels went up. We couldn’t believe it. Now we knew the only next step in the plan was chemotherapy. I went through three cycles of chemo at Mayo Clinic, and tried to stay positive and leaned on my incredible support group to get me through the hard days.

Over the course of this five-month stretch, #hoffstrong wasn’t just a hashtag. It was a beacon of hope for me and everyone else. I never knew how much people cared. But I can truly say that I couldn’t have gotten through this without the messages of hope and encouragement each and every day.

On August 17th, I was one week removed from finishing chemo. Remember that pivot I had to make when I thought I was getting lymph node surgery instead of chemo? Well that doubt was creeping back into my mind.

But my doctor walked in and said “How are you today Brett?” I replied, “Oh I’m pretty nervous”. He answered, “You shouldn’t be.” Right then and there I grabbed my wife’s hand, and knew that the treatment, but also the support team, made this moment possible.

Cancer can happen to anyone.

I think most of us think cancer is something that comes later in life. Even though we know it CAN happen at any age, you never want to think YOU can get it, especially at a younger age. What this has taught me is that there is not enough awareness of testicular cancer. I didn’t grow up checking my testicles.

As a news anchor/reporter, my station was gracious enough to run a piece on my story. But I didn’t want it to be about me. I wanted it to be about the countless men that I can help who wouldn’t have checked themselves otherwise. If that story can save one person or change one person’s habits on being proactive to check, it’s all worth it.

Cancer doesn’t have to be the end. I think it’s the beginning of a new life, cherishing the “good” in each day and helping others in need along the way.

This post originally appeared on A Ballsy Sense of Tumor on November 13, 2020.  It is republished with permission.