Max used this picture on his blog, taken by his friend Erik when he was in college Courtesy of Justin Birckbichler

John-Mark Mallory, executive director of the MMF, shares his thoughts on surviving the loss of his brother to testicular cancer.

Welcome to the Band of Ballers! In this series on ABSOT, I’m turning over control to some other ballsy testicular cancer survivors and patients who have inspired me with their work in advocacy and awareness during and after their diagnosis. This month’s feature is all about John-Mark Mallory, the Executive Director of The Max Mallory Foundation and brother of Max Mallory. Enjoy!

In 2014, my brother was on his way to living his dream. He graduated from college with a degree in Media Arts and Game Design (MAGD) from the University of Wisconsin-Whitewater. He was still living in Whitewater, working for a mobile gaming startup called Mobile Mesh Games. It was a huge accomplishment for him to get a job in his profession straight out of college.

Max got his own apartment and was working hard. Life wasn’t perfect, but he was off to a fantastic start at just twenty-two years old.

In September 2015, Max started to have regular stomach pains. He went to the doctor and was given some low-grade antibiotics for a possible stomach infection. Max chalked it up to being stressed and working hard, or maybe not getting enough sleep.

After a week or so, the pain didn’t go away and was getting worse. Max decided to see his doctor in Illinois. The day before the appointment, he had to go to the ER because of intense stomach pains.

My mom and I arrived at the ER early that evening after hearing of what happened. We weren’t sure what to think. Was it his appendix, maybe? Why was he having such bad pains? Nothing could have prepared us for what happened that night.

After hours of waiting and some basic imaging tests, a nurse and a doctor came into the room in the ER, turned off the TV, and asked us to sit down. They then told us that the imaging came back and showed cancer – a lot of cancer that had apparently spread. It was the most shocking moment of my life. I sat there stunned, then left the room to go outside because I thought I was about to throw up.

It was a horrible night. But my brother, in his typical fashion, was positive and said he was going to fight this and beat it. He was the one staying calm. I was always inspired by that.

After the initial scare of not knowing exactly what the cancer was, it was all explained the next day as an oncologist came to the room with more test results. We knew that my brother was born with one testicle, and my parents were told by doctors after his birth that his other testicle never developed in his body. It wouldn’t need to be removed as an undescended testicle because it was never there. 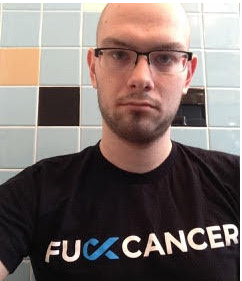 Shortly after Max was diagnosed and started chemoCourtesy of Justin Birckbichler

Except…it actually was there for his entire life. Numerous pediatricians missed it, and we found out twenty-two years later in the worst way possible. The undescended testicle was a tumor now, and cancer had spread to Max’s lungs and brain. But after speaking to more doctors, there seemed to be hope in sight. After an initial round of chemotherapy at the hospital in Illinois, we traveled to Indianapolis, IN, for more specialized treatment.

Max went to the best hospital in the world to treat the specific type of cancer he had. Despite his cancer spreading, it was classified by the doctors in Indiana as “Stage 3C”. They called it this because they felt it was too curable to classify as stage 4 cancer. We had our hopes up that Max would make a full recovery, like many other young men who were treated there.

Max endured a lot during his treatment, including two surgeries and two rounds of intense chemo. He stayed positive and hopeful throughout the entire thing, and Tweeted through the pain and kept his amazing sense of humor. He had the support of our family and a wonderful group of friends who were always by his side whenever he was in the hospital or at home recovering. 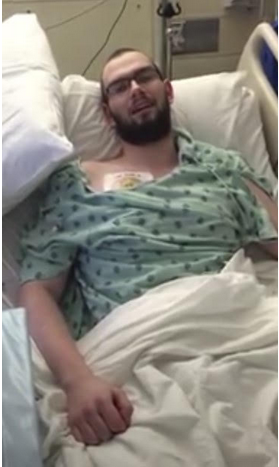 Recovering from brain surgery at the IU hospitalCourtesy of Justin Birckbichler

Just seven months passed from his diagnosis to his death. It was unthinkable. Max was supposed to beat this. He had the attitude, the support system, the best treatment in the world. It will never make sense to me.

I was speaking with my parents the day after Max died and I remembered a conversation we had a few weeks before. Max was planning on beating cancer, and when he did he told me he would pause his career in the gaming industry. I was shocked by this because Max wanted to work in gaming since he was a kid.

But Max wanted to chart a different course: helping young adults with cancer deal with their diagnosis and providing more resources and education to testicular cancer patients.

I was so inspired by Max’s wishes to change his entire career path to help other cancer survivors. He was already making plans of organizations he’d reach out to once he recovered. A foundation seemed to be the best way to honor Max’s intentions, and do the best we could to keep his memory alive. 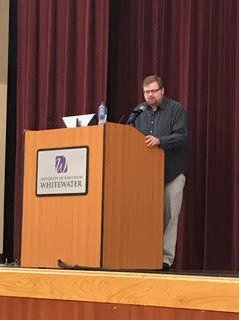 It wasn’t easy to start the Max Mallory Foundation. Initially, I struggled to work on its development because of how difficult it was to deal with the grief. In 2017, we started the foundation as a way to carry on Max’s legacy.

What we’re doing now is just the start when it comes to the Max Mallory Foundation. We’ve funded a scholarship at my brother’s alma mater in the Media Arts and Game Design program. Our foundation also funds the grand prize at the yearly MAGD Expo, which showcases student’s media and game creations. We’re extremely proud to support a program my brother loved so much, and one that he felt truly changed his life for the better.

In addition, we’ve launched a podcast called “Don’t Give Up on Testicular Cancer.” It’s hosted by my mom, Joyce Lofstrom, and can be found on Spotify, Apple Podcasts, and other platforms. (Editor’s Note: I am a bit biased, but my personal favorite is episode 7.) The goal of the podcast is to highlight organizations and individuals working in different ways to raise awareness and education of testicular cancer.

In the coming years, we hope to raise more money to help provide support for testicular cancer patients who need help with treatment costs or other expenses. We’re working on expanding.  Please

This post originally appeared on A Ballsy Sense of Tumor on December 12, 2020.  It is republished with permission.