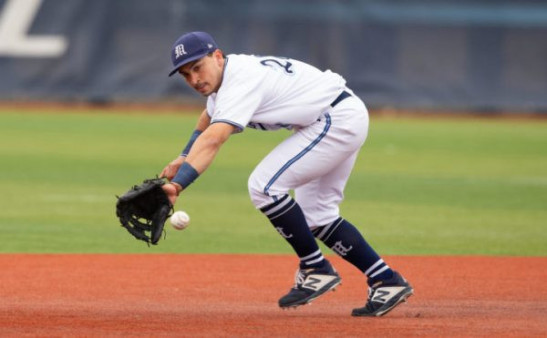 Caleb Kerbs of the University of Maine makes a backhand stab of a ground ball during a recent game at Mahaney Diamond in Orono.

Caleb Kerbs — Strike Out the Stigma

Caleb Kerbs wants to strike out the stigma behind testicular cancer.

When I tell people that I am grateful to have had cancer, most don’t understand. As much as receiving a diagnosis isolated me from others, it also gave me an opportunity to pause for a moment and look deep within.

Testicular cancer taught me just how precious life is and that no moment can be taken for granted.

I’m Caleb Kerbs, a 23-year-old former Division 1 baseball player from Brooklyn, New York. During my junior year in college at The University of Maine, I felt an achy pain in my groin area after baseball practice. I decided to get a check up from the campus doctor.

After a few tests were done, the doctor sent me to see the urologist. When he showed me the ultrasound image and used the word “cancer,” I froze in disbelief. I felt all alone. There was no time to wait. Cancer spreads quickly to other areas in the body. I broke down and cried. I couldn’t believe that someone like me, a healthy athlete, could receive a diagnosis that has taken the lives of so many. I remember lying in my bed that night and thinking that my life was coming to an end.

I asked myself, “What caused this?” and “What have I done with my life up until this point?”

After meeting with my coaches and teammates and telling them what I was facing with, one of the more difficult things I’ve ever done, I left school and scheduled an operation at Memorial Sloan Kettering in New York City, my hometown.

At the time, I did not know that testicular cancer is predominantly a young man’s disease, most often found in men ages 15-35. After visiting with my oncologist and getting X-rays, CT scans, and blood work testing, he told me the cancer was in Stage I and I was lucky to have caught it so early. Just before surgery, on the advice of my doctor, I put my future children on ice at a cryobank.

The first few days after surgery to remove the affected testicle were awful. Everything felt like it was throbbing and the slightest movements caused me to wince in pain. I spent nearly six weeks indoors and resting in bed.

I hoped to return to the baseball field for my final year in college… But I soon came to realize that I wanted to do something more than just play.

I felt like sharing my story could prevent more serious cases and could shed more light on the lack of attention that this particular disease receives. I met with coaches, teammates, and other staff in the school’s athletic department. They were going to support me no matter what I decided was the best way to get a message out. (Editor’s Note: To be fair, his teammates and coaches were already well versed in talking about balls – this was just a far more important mission.)

We decided on “The Strike Out The Stigma” campaign and began brainstorming ideas for videos that would educate people but also talk about men’s health in a way that was light and easy.

Let’s face it. Men’s health is typically about sex, abs, and acting tough. When we released the video it received thousands of views on Twitter and other social media platforms.

I received messages from friends, family, and complete strangers about how much they liked what I was doing. Justin reached out to me, as did an MLB player and the head of the Testicular Cancer Foundation. (Editor’s Note: Mike Craycraft, founder of TCS, is also an alumni of the Band of Ballers and one of my biggest testicular cancer inspirations,) He called me and told me how proud he was that I was speaking up.

I felt the support from my school, and the athletic league, The America East, that Maine is a member of. I was starting to see how just by sharing my story could impact others’ lives.

As I said, it’s been a blessing, to my surprise, to be a cancer survivor.

Be sure to connect with Caleb by visiting him on Twitter and Instagram. Until next time, Carpe Scrotiem! 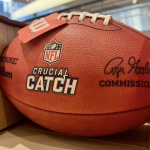