While I generally like to think of myself as exceptional, if cancer-free is unremarkable, I’ll accept that.

The majority of ABSOT posts average around 1,000 words. Honestly, this one should be on the shorter side, but I’ve said that before and end up cranking out like 1,300 words. To make a short story even shorter, I am still cancer free.

To make the story slightly longer, I had my three year scan on Tuesday, December 10. Coincidentally, that day I was taking part in a satellite media tour for Survivorship Today, as part of my work as a patient ambassador to Bristol-Myers Squibb.

Participating in 24 interviews back-to-back-to-back helped to keep my mind active and not focusing on the impending scan. Some of the interviewers asked specifically about scanxiety and I shared that I had a scan coming up later that day. I spoke about how talking about it helped me to stay calm and strong.

After the tour (and a delightful, albeit rainy, stroll around Washington, DC) were complete, it was scan o’clock. Honestly, this was one of the easiest scans I’ve ever had. The most notable moment was the traditional “in the CT machine” picture I asked the tech to take for me. Seriously — look at it. It’s pure fire. 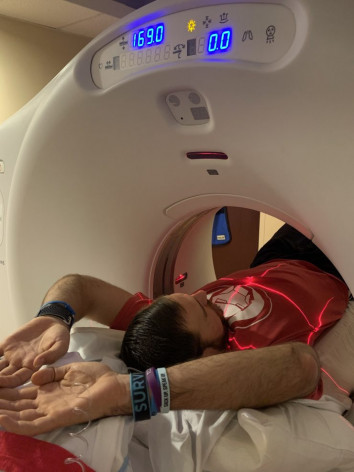 The scan was otherwise unremarkable.

The following day, I even reflected as such on Instagram, saying:

“I had my three-year scans yesterday and I’m feeling pretty ok about them right now. I used some meditation exercises to keep my calm during the scans, because there is nothing more nerve wracking than going in and out of that machine. The outcome is out of my control and that worrying about it won’t change it either way.”

On Thursday, December 12, I had a follow up visit with Dr. Maurer to discuss the results. Honestly, I felt some slight anxiety while waiting for him in the room. However, as soon as he came in, I was told that I had a “completely negative scan.” There were minor things that have been tracked closely, such a minor lung scarring and some subcentimeter lymph nodes, but otherwise everything else was unremarkable. I’ve gotta say, this is probably the first time I’ve enjoyed being called unremarkable.

One new thing I did during the visit was using the Abridge app.

After asking Dr. Maurer’s permission, I recorded my entire visit on the app. Afterwards, Abridge automatically created an abridged transcript of the conversation, highlighting the key medical moments.

While the app definitely made it really easy to write this blog post, I wish I had it when I was first diagnosed. There was so much information that I know I missed, and it would have been great to be able to go back to review later on.

Moving forward, I will have blood work in six months and another scan next December.

It’s like the Christmas gift that keeps on giving. I’ll be tracked for at least two more years, for a total of five years. Dr. Maurer emphasized that “the fact that we have got this far, three years, without a recurrence is really smooth sailing, and we really want to look at five years without a recurrence.”

So that concludes another scan. My key takeaways are that I am getting better at handling scanxiety, and that I am pretty unremarkable.

And for the record, this is clocking in at just under 600 words, so I guess that is remarkable in the sense that I managed to contain my word vomit. 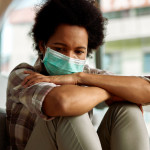