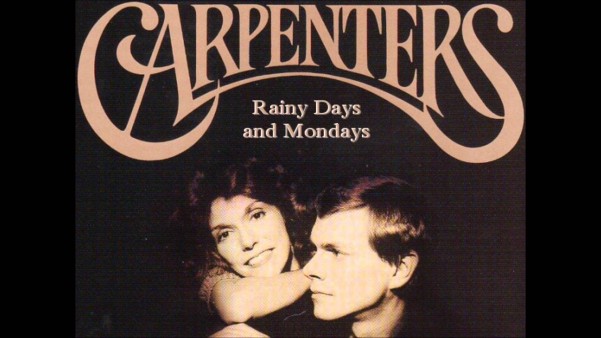 Cancer Surgery Complications and The Carpenters’ ’Rainy Days and Mondays’

Just when you think you have suffered every misery and indignity there is with cancer…another one comes along. My catheter has been out for weeks, but I function as if it is still there; that is, my bladder does not fill and the urine just comes out when it wants to. Standing and walking — functional abilities I have grown rather attached to — bring on the waterworks. The urologist says that nerves to my bladder were severed during surgery, and it may take six months for this chronic leakage to get better. SIX MONTHS??? When I heard that, I went to Costco and bought the largest box of Poise bladder control pads I could find. Six months is a long time, and I must go through 8 pads a day. I suggest all of you go out and buy stock in Depends. I will personally drive up their value.

Otherwise, I continue to mend after surgery. I am no longer on any pain medication. I can do 40 minutes on the ellipse machine. I am off all dietary restrictions, and am happy to be able to eat again. However, my life is very, very small. I rarely leave the house. My time is nevertheless consumed with all kinds of hassle responsibilities like the endless paperwork involved in applying for Long Term Disability. So I welcome visitors!

I have an announcement to make: my public blog has won an award! Out of many contenders, it won for “Most Creative,” for ihadcancer.com’s competition for the Best Cancer Blogs of 2017. Here is what they wrote about it:

“Robin authored The Cancer Olympics, an account on her story with late-stage colorectal cancer, and started her personal blog shortly after her book’s publishing. What is special about Robin’s blog is that she pairs each post with a song, including its lyrics, to illustrate a specific feeling, experience, thought, or stage in her fight. From linking classics like The Beatles’ ’With a Little Help From My Friends’ with cancer coping, to pop rock band Coldplay’s ’Clocks/ with learning of her own recurrence, she has proven that there is a healing benefit to expressing yourself through creativity. Utilizing music, specifically, is a powerful way of communicating things that otherwise can feel indescribable. When there are no words, music speaks for us, and when times look grim, or bright — music is there to lift us up every step of the way.”

I had my oncology appointment recently. My oncologist was in favour of a watch and wait approach. Because they could not get a clear margin from my pelvic sidewall during surgery, recurrence is inevitable. He would prefer to reserve treatment for when another solid tumour forms. However, I asked to get Xeloda, the oral chemo I had with my primary tumour. After all, it put me in remission for 7 years. He agreed easily, saying there was no one correct answer in a case like mine. We will try it for 6 months, or perhaps less if I cannot tolerate it. So I will start it in about two weeks, if my next CT scheduled for then shows no visible cancer. It was so nice — and a little strange — to be able to access a cancer drug without a huge fight!
​
Along the theme of water and rain, today’s song taps into my feelings of discouragement about my seeming never-ending stream of urinary complications (no pun there!). The Carpenters’ self-titled 1971 album contained this famous song, “Rainy Days and Mondays,” that went to number 2 on the Billboard Hot 100 chart. It was kept out of first place only by Carole King’s “It’s Too Late.” (A song I don’t want to use!) Poor Karen Carpenter, who died of complications from anorexia, had a lovely contralto voice and is considered to be one of the best female vocalists of all time by Rolling Stone magazine. I still miss her.

This blog post originally appeared on The Cancer Olympics. It is republished with permission.