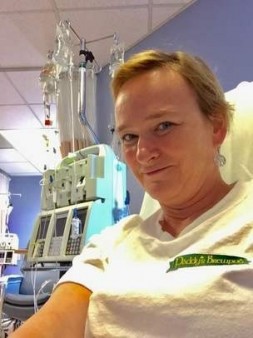 Chemotherapy and Etta James’ “At Last”

The Irish word for health!

I have just returned from Ireland, a pilgrimage I made with my three sisters.  The trip was everything I hoped it would be.  It had astounding views, delightful food, and smooth and nourishing Guinness.  We sisters had lots of laughs together, as well as some deep spiritual moments. We marveled at the Belfast shipyards where my grandfather and great-grandfather worked, we were in awe before the prehistoric Newgrange tomb 1000 years older than Stonehenge, we were astonished by the rugged beauty of the green landscape.  It was truly the adventure of a lifetime.  I was so grateful to go.

Readers of The Cancer Olympics will remember that my original cancer diagnosis was delayed by two years by medical misconduct.  They will also remember that I fought the province to get the best-practice chemo for my kind of cancer.  Although we were successful in getting FOLFOX chemotherapy added to the formulary in 2011, the approval came too late for me to receive it.

Shockingly, I found myself in the identical situation with my recent cancer recurrence.  A misread CT scan in December missed the recurrence; and yet again, the drug I need is outside the provincial formulary.

The very day before I left for Ireland, I found myself in the centre of a media storm!  CBC radio and new, learning about my plight, immediately provided coverage and advocacy:
A CBC web article: http://bit.ly/2uumVbF
CBC News coverage (at about 8:40 minutes in): http://bit.ly/2vJBsTn
CBC Information Morning radio interview: http://bit.ly/2vBfjqD

My own contacts within the government (those who helped me last time) also got involved.  By late that same day, I was called by the Department of Health and Wellness to tell me that I would be granted a special exemption – that I would get Vectibix after all. It remains “under consideration” for addition to the formulary for all others who need it.

So I start!  After seven years of striving, I will finally get FOLFOX chemotherapy, with Vectibix as a special agent.  It is such a strange feeling.  So today, my musical selection is the rapturous “At Last” by Etta James.   This song conveys a feeling of deep gratitude and relief for the consummation of a longed-for relationship.  I used to play this song on the last day of school, to capture my feelings of joy at the arrival of summer, but now I play it to express my elation about starting the treatment I deserved years ago.  Those of you who have undergone chemotherapy will laugh at the idea of a love song going out to it. But, nevertheless, I dedicate this song to FOLFOX.

This post original appeared on The Cancer Olympics. It is reprinted with permission.