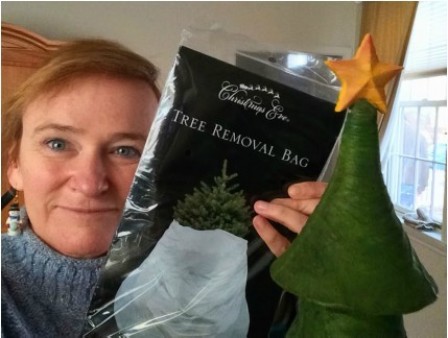 The fifth Christmas tree bag since my diagnosis

My rational mind knows that these tests are simply pictures of my reality. And rationally, I know that whatever they reveal I will somehow cope.

But my subconscious mind has other ideas. It screams “NO! NO!” and recruits every cell in my body to push back. It pummels me at night with bad dreams. It ignites those flight-or-fight neurons, lighting them up like my Christmas tree.

To be a cancer survivor is to live forever in between the world of the sick and the well. You are not in active treatment—but then again, never again can you live unselfconsciously among the healthy. For me, this limbo feels like a true abyss, as my mother had a fatal recurrence of her colorectal cancer after 14 years remission. I never can think of myself as “cured.”

The cancer deaths of others grieve and oppress me. My brother-in-law Gerry Porter died last week of brain cancer, only 54. Larry Broadfield, my mentor through survivorship and an integral figure to the story behind The Cancer Olympics, died in October.

So how does one go forward? I reflect that I am lucky to have made it as far as I have. In 2010, I was facing a grim prognosis—at one point, estimated to be only a 4 percent chance of living the next five years. I tried to defy those bleak odds by small acts of hope. That Christmas, I put away five tree removal bags in my Christmas boxes. Yesterday, when decorating said Christmas tree, I found the fifth one. It made me smile.

So how will I cope with scan anxiety through this week, as I face my upcoming tests?

I plan to go out and buy another five Christmas tree removal bags.

This blog post originally appeared on The Cancer Olympics. It is reprinted with permission.