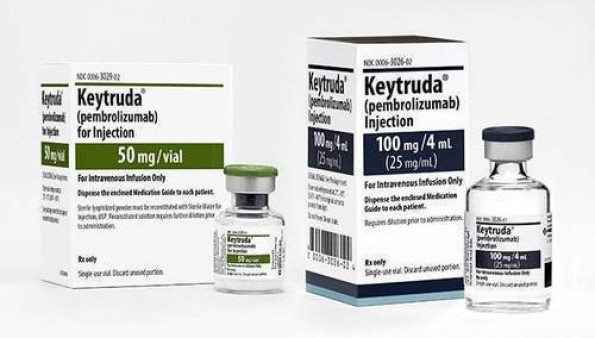 Immunotherapy receives accelerate approval for women whose cancer progresses or relapses after chemotherapy.

On June 12, 2018, the Food and Drug Administration approved pembrolizumab (Keytruda, Merck and Co. Inc.) for patients with recurrent or metastatic cervical cancer with disease progression on or after chemotherapy whose tumors express PD-L1 (CPS ≥1) as determined by an FDA-approved test.

Pembrolizumab was investigated in 98 patients with recurrent or metastatic cervical cancer enrolled in a single cohort of KEYNOTE 158 (NCT02628067), a multicenter, non-randomized, open-label, multi-cohort trial. Patients were treated with pembrolizumab intravenously at a dose of 200 mg every 3 weeks until unacceptable toxicity or documented disease progression. Among the 98 patients, approval was based on 77 (79%) patients who had tumors that expressed PD-L1 with a CPS ≥1 and who had received at least one line of chemotherapy for metastatic disease. PD-L1 status was determined using the PD-L1 IHC 22C3 pharmDx Kit.

The major efficacy outcomes were objective response rate (ORR) according to RECIST 1.1 as assessed by blinded independent central review, and response duration. With a median follow-up time of 11.7 months, the ORR in 77 patients was 14.3% (95% CI: 7.4, 24.1), including 2.6% complete responses and 11.7% partial responses. The estimated median response duration based on 11 patients with a response by independent review was not reached (range 4.1, 18.6+ months); 91% had a response duration of greater than or equal to 6 months. No responses were observed in patients whose tumors did not have PD-L1 expression (CPS <1).

The recommended pembrolizumab dose for treatment of cervical cancer is 200 mg every 3 weeks.

FDA granted this application priority review. This indication is approved under accelerated approval based on tumor response rate and durability of response. Continued approval for this indication may be contingent upon verification and description of clinical benefit in the confirmatory trials. A description of FDA expedited programs is in the Guidance for Industry: Expedited Programs for Serious Conditions-Drugs and Biologics.

This announcement originally appeared on the Food and Drug Administration website of June 12, 2018.