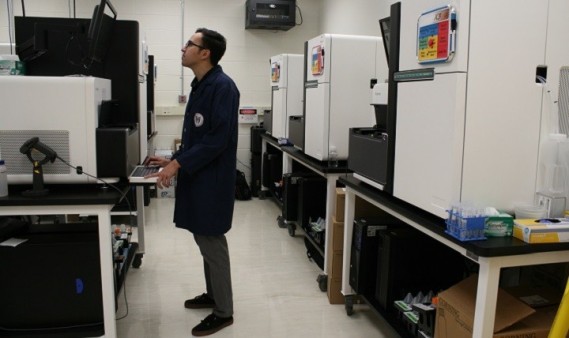 Nathan Lott, a research associate at the Uniformed Services University of the Health Sciences, closely monitors data on a next-generation sequencer in The American Genome Center at the university. TAGC is one of four academic genome centers in the U.S. DoD photo by Sarah Marshall

I’m very proud of the innovative research NCI supports and feel honored to be leading this world-renowned institution. The many partnerships and collaborations in which NCI is involved are an important component of the innovation and success of NCI’s efforts. I’m a big believer in partnerships and I intend to facilitate more of them moving forward.

I’m particularly excited about the first partnership I signed since becoming director of NCI, which is with three of our country’s military institutions. In fact, one of the first things I displayed in my new office at NCI is an enlarged copy of the memorandum of agreement (MOA).

This MOA—officially known as the Collaborative Efforts Statement, Multi-Federal Cancer Initiative—involves the US Department of Veterans Affairs (VA), the US Department of Defense’s (DoD) Walter Reed National Military Medical Center, and the Uniformed Services University of the Health Sciences (USU). Signed on December 1, 2017, the MOA renews a prior agreement with DoD and USU signed by former NCI Director Harold Varmus, MD, and extends the collaboration to now include the VA.

The partnership has numerous aims, including optimizing resources and expertise, developing and leveraging new technologies, collaborating on clinical trials, accelerating discoveries in cancer research, and increasing education and training opportunities.

The ultimate goal, as always, is to enhance patient care. Under this partnership, in fact, civilian patients with cancer being treated at the NIH Clinical Center can receive certain types of care at the John P. Murtha Cancer Center at Walter Reed, which is just across the road from the NIH campus in Bethesda, MD.

With these visits, I can better appreciate the enormous potential of this strategic partnership and the benefits to our mutual scientific, educational, and clinical missions.

APOLLO Deepens our Understanding of Proteogenomics

One of the major initiatives that exemplifies what the MOA hopes to further is the Applied Proteogenomics OrganizationaL Learning and Outcomes (APOLLO) network, which was established in 2016 as part of the Cancer MoonshotSM.

This initiative is an excellent example of how different parts of the federal government can leverage each other’s knowledge, resources, and infrastructure. The APOLLO network is bringing together NCI’s expertise in both proteomics and genomics and applying it across the VA’s and DoD’s national health care systems, with the ultimate goal of creating the first nationwide program for systematically integrating proteogenomics into cancer care.

Under this program, tumor and other samples from patients being treated at VA hospitals, the Murtha Cancer Center, and the NIH Clinical Center—veterans, active-duty military, and civilians—will undergo comprehensive proteogenomic analysis. APOLLO initially focused on lung cancer, but it has now expanded to include ovarian, endometrial, prostate, and breast cancers.

Over the course of the 5-year initiative, DoD labs will perform deep molecular characterization of the DNA, RNA, and proteins in samples from 8,000 patients seen at these hospitals. In future phases of APOLLO, this information will be used to match patients to targeted therapies as part of nationwide clinical trials.

NCI’s collaboration in this emerging proteogenomics field with the nation’s two largest health systems, DoD and VA, is clearly more efficient than if each organization worked in separate silos.

In addition, the patients treated in the VA system and at the Murtha Cancer Center form a large and diverse population. As an example, the DoD active-duty population, in particular, includes a large number of older adolescents and young adults with cancer, a group that has unique challenges and has been underrepresented in cancer clinical trials.

NCI is also partnering with the VA on another important effort, the NCI and VA Interagency Group to Accelerate Trials Enrollment (NAVIGATE). The goal of this 3-year initiative is to offer veterans who have been diagnosed with cancer increased access to state-of-the-art care through participation in NCI-supported clinical trials.

As part of NAVIGATE, NCI is providing funding for up to 10 VA medical facilities to directly enroll patients on NCI-supported trials.

NAVIGATE is a win–win initiative. It will make it easier for veterans with cancer to receive the newest treatments and increase their participation in NCI-supported clinical trials. And the increased participation should allow the trials to be completed more quickly and new treatments to become available sooner.

Advancements in technology are providing us with more means to collect data. But, are we as a research community ready and able to take on the increasingly mounting data being collected?

In order to take advantage of the information we are amassing, the data must be harmonized, which means ensuring that the systems that store the data and the data speak the same language. And the data must be centralized and accessible to promote sharing and analysis among researchers.

NCI has been developing tools to help make this possible. For example, the GDC brings genomic and clinical datasets together in one virtual location, offering a unified knowledge base that any researcher can access. Much more than a data repository, the GDC also makes available to the broader cancer research community interactive Data Analysis, Visualization, and Exploration (DAVE) tools that can be used to customize the data the researchers wish to study.

But even with these and other new tools, we’re still very much in the early stages of understanding how to use big data. I think it’s incumbent on NCI to take a lead role in ensuring that the cancer research community understands how to gain insights from these data so that we can take this understanding and apply it to our patients.

The goal of BD-STEP is to teach data scientists—who typically have a background in computer science, modeling, statistics, analytics, and math—to use data sets, algorithms, and models for health outcome and patient care research.

As part of BD-STEP, NCI is identifying early-career scientists and engineers from accredited programs in engineering, chemistry, computer science, mathematics, physics, and other relevant disciplines, and placing them in VA medical centers, giving them an opportunity to work closely with VA clinicians.

The hope is to train a new generation of clinical data scientists who can work with the rapidly increasing amounts of data being generated and help to fill gaps in our understanding, with the goal of directly impacting clinical decisions and improving care outcomes. So far, six VA centers are participating in this pilot program and are actively recruiting new fellows.

A Long Tradition of Powerful Partnerships

But NCI’s partnerships with VA, Walter Reed, and USU that are included in the renewed MOA are just one example of a long history of successful interagency partnerships. They are a continuation of successful collaborations the institute has engaged in over the years that emphasize innovation, convergence of scientific disciplines, integration of advanced technologies, and leveraging of resources.

Whether the partnerships are with other US federal agencies, national and foreign institutions, private philanthropic organizations, or industry, our ultimate goal is always to create and foster opportunities that otherwise might not be feasible—all as a means of further accelerating progress and benefiting patients. I’m confident that the partnerships created by this MOA will help to do just that.

This article was originally published on March 27, 2018, by the National Cancer Institute. It is republished with permission.