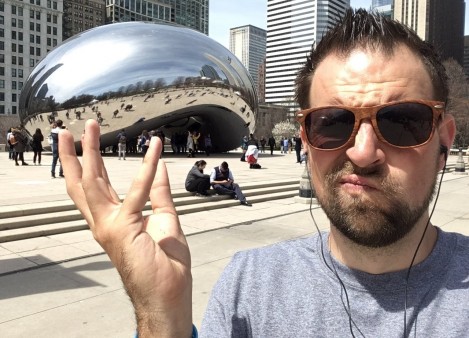 Even shiny balls need to be checked.

HealtheVoices18 — The Pre-Conference, Day 1, and Day 2

A few months ago, I saw an Instagram post from my fellow Uniballer, Kyle Smith of Check 15 (and future Band of Ballers contributor), that mentioned that he was on the Advisory Board of HealtheVoices18. He also shared an application link and urged people to apply. I filmed my video application and was about to hit submit when I realized I had made a vital mistake.

I repeatedly referred to the conference as “Heal The Voices”… And it’s pronounced “Health eVoices.” I should have realized that it’s a conference for online health advocates, so eVoices makes sense. 53 takes later, my final draft was submitted. Despite this hiccup, I was accepted, and arrangements were made for traveling to Chicago in late April 2018 for the three day conference.

When I arrived in Chicago, I grabbed a late night snack with Kyle, marking the first time the two Uniballers would form one complete sack. We had to ensure he sat on the left side of the table, while I manned the right side.

After a day spent in hardcore tourist mode (that included administering more surveys and a visit to the Chicago Bean, which I of course used to demonstrate a self-exam, meeting up with Aerial from the Stupid Cancer app, and dinner with my friend Chris), we had one session on Thursday, a day ahead of the official start of HealtheVoices18.

As a side note, please consider completing the survey. It’s a total of six questions and part of an extremely important research study I am running about men and testicular exams at the doctor’s office. If you don’t have testicles yourself, please pass it on to your sons/husbands/boyfriends/uncles/male dogs/etc. (You can also snag a copy of the graphic here).

A number of cancer advocates and I were invited to be an advisory panel for Cancer.com. This was my first experience being in a room full of cancer advocates, and I have got to say, I loved it. Instant bonds were formed, especially while sharing why we all started advocating. I noticed immediately that we are all passionate about what we do, and I commend the Cancer.com team for listening to our honest input and sometimes critical feedback. I look forward to seeing how they continue to develop and improve the website.

That evening, I did manage to see Avengers: Infinity War. No spoilers, but hot damn it set the bar early for the rest of the weekend. (Author’s Note: To the best of my knowledge, this is the first swear word on ABSOT. Cancer never made me curse… But Thanos sure did.)

Day one of HealtheVoices18 begins

The next morning, HealtheVoices18 began with opening remarks from Caroline Pavis, who works in Corporate Communications for Johnson & Johnson, the parent company of Janssen (the company running the conference). According to her, there were 400+ applicants for the conference and 122 total advocates (representing 40 health communities) were accepted, with 52 percent new attendees and 48 percent returning veterans. She also stated the theme for HealtheVoices18: “Growing Stronger Together.”

Next, Kerri Sparling, a diabetes advocate, took the stage for the opening keynote. While her condition is far different than mine, I did find myself connecting with her on numerous levels, and not just due to our common shared interests: an appreciation for humor and cat pictures. She told us her story of having to “follow the rules” of diabetes (check your blood sugar regularly, watch what you eat, and more) when she was younger, which reminded me that I had to eat and drink even when I didn’t want to during chemo. She closed her keynote by asking us to remember why we started advocating and to use our work to amplify others’ stories, which solidified my dedication to the Band of Ballers series on ABSOT.

Learning about the resilience and importance of health advocates

The next HealtheVoices18 session launched with attendees developing a one-word definition of resilience. We also heard about the benefits and consequences of being (or not being) resilient. Janssen’s researchers shared their definition: “Acquired ability to regularly recover, adapt, and grow from stress,” and defined three levels of stress — normal stress (in my case, my teaching job, being an adult), training stress (advocating with new projects, learning new homeowner/technology things), and excessive stress (taking too much on at once).

This was followed with a panel discussion from five different advocates, many of whom had attended previous HealtheVoices conferences and all represented a different advocacy domain. These are their quotes that stood out to me:

Kate — “This is just another day… It’ll be ok tomorrow.” “Make your illness work for you.”

Hetlena — “Have a bad day for a few minutes. Put it on a timer and move on.” “Turn a negative into a positive.”

John — “The difference between being and having is really at the core of the story. I’m not HIV and HIV is not me. I’m John.”

After a fantastic dinner, Catherine Bright, President of Infectious Diseases for Janssen, took the stage to share her own experiences of how health advocates helped her daughter. Her final message reminded us that “there are always families out there who are wanting and needing to hear your voice.”

Our last speaker for the evening was Karen Duffy, a chronic pain advocate, former MTV VJ, and actress (mainly of Dumb and Dumber fame). Again, while her condition does not involve cancer or testicles (the latter would be pretty hard), I found many parallels to my own life. She was at the top of her game when she developed her condition, just as I was in 2016. She decided to become an advocate just because she could — she had the skills to serve and was committed to using them in a positive way. As she said, “Pain is inevitable, but suffering is optional. I didn’t want a bad day with my disease to trick me into thinking that I had a bad life.”

The first session of the day focused on Twitter. While I didn’t really learn anything inherently new about growing an audience on Twitter, I was affirmed that many of the things that I already do are considered best practice. Some mental health advocates asked about Twitter would be doing about cyberbullying and ways to stop it, but they didn’t have many concrete steps in place. I also inquired about the verification process and discounted/free Tweet promotions, which would help spread more influence for health advocates, but unfortunately, they had no real answers. Even though their answers were disappointing, to be honest, I hope our voices were heard and I will be following up over the next few months.

A new avenue of health advocacy for ABSOT

However, the next two sessions about video production, led by Sarah Snow of Wisdo, and YouTube sessions, by Sarah Healy and Sonalika Reddi of YouTube, were amazing and got my wheels spinning. While ABSOT started as a blog, it’s since grown into the realms of Instagram, Facebook, and Twitter, but I haven’t really tackled YouTube.

After learning various tips on how to create videos and grow an audience, I’ve decided that I will be launching the A Ballsy Sense of Tumor YouTube channel, which you can check out and subscribe to here. In the interest of full disclosure, I was so excited about this new venture that I worked on some changes during the next two sessions. The sessions had some valuable information, but I was just so inspired that I had to multitask.

To be honest, I am a bit nervous and anxious about this endeavor. While I am hilarious and charismatic in person (not to mention incredibly modest and humble), that doesn’t always show through in video. I also know I do better when I just let it free flow instead of scripting out what to say. Perhaps a storyboard and major bullet points format will work best for me when planning out my content. It will definitely be a learning curve, but I am excited to start planning my first videos, for shooting, editing, and publishing over the summer/early fall.

Unwinding and sharing stories at HealtheVoices18

Our final group session was led by Mike Veny, HealthCentral’s Mental Health Social Ambassador. Since mental health has been a recent focus of mine, I was very interested in how he shared his definition of mental health: how you respond to life through thoughts, feelings, and behavior. Only behavior can be observed by an outside observer, while the first two are internal. To help us learn a technique that has helped him, he led us in some rhythmic drumming exercises, which were definitely fun. In true Uniballer fashion, I chose a single maraca.

Afterwards, representatives from Wisdo, a video app for sharing and learning from the collective wisdom and challenges of others, interviewed me for eventual sharing on their platform. It was nice to share my story, and the video producer said I had her in a combination of tears and silent laughter in the back of the room. The videographer was another fellow Uniballer, but he was born that way, so I’m not sure which one of us won… but we each had one!

Later that evening, we had an open mic night. I had prepared a poem about my journey in mission, in the style of Dr. Seuss. The video is embedded above, and I think I did a pretty good job. I only dropped the ball on one line, but totally mocked myself on it. Self-deprecating humor is only second to my ball puns.

Be sure to check back in a week or so when I publish my reflection on day 3 and the HealtheVoices18 conference as a whole!

Disclaimer: My travel expenses were paid for by Janssen Global Services, LLC. All thoughts and opinions expressed on social media or this blog are fully my own, honest thoughts, and not reflective of those held by Janssen… Especially the ball jokes. Those are all mine.