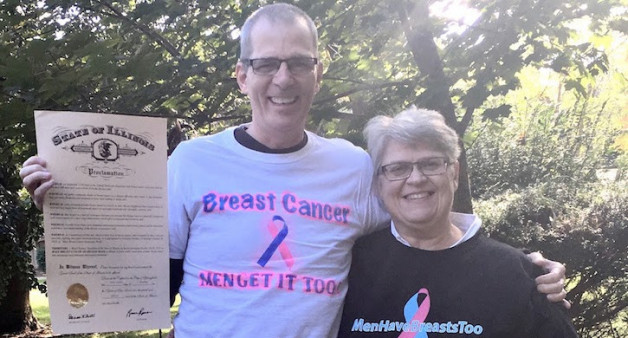 John Falk and his wife and two awesome shirts

‘Men Get Breast Cancer, Too!’

Welcome to the Band of Ballers! While this series on ABSOT usually features other ballsy testicular cancer survivors and patients, this is an extra-special edition featuring a two-time male breast cancer survivor.

October is Breast Cancer Awareness Month, and what better way to raise awareness in our men’s health community than from a male breast cancer survivor, John Falk. I guess technically he is a Band of Boober, but he’s a member of the Band of Ballers in my book.

One day in 2013 I noticed my left breast was swelled up. It did not look right at all. The breast itself felt uncomfortable. It had a ticklish feeling and it really made me wonder what was going on. I went to the doctor to get it checked out.

After my first consultation my tests were negative. It was a year later when I felt the lump. I caught it so early that it was frozen in place and did not move. I had a full mastectomy. No lymph nodes taken. No chemo or hair loss. No medication. It was a surgery and I was done. I didn’t want to have the ribbons. I didn’t want to wear the banner because I didn’t go through wrenching treatments battling my cancer.

Two years later, I found another lump and my male breast cancer was back

The second time around the doctor said it was invasive. I was thunderstruck. I realized that I am a cancer survivor. I had a mammogram, a biopsy, and a pet scan. After my surgeries, I had 30 radiation treatments and I am on a 5-year regimen of Tamoxifen. I also had genetic testing that shows I do not carry the breast cancer gene mutation.

Now, I am 2 years in remission. I had radiation pneumonia and I have some resulting issues such as coughing and shortness of breath but at age 60, overall, I am doing great.

However, my experience with the first doctor I saw was not great

When I came into his office, in a matter-of-fact voice, he asked me, “Why did your doctor send you to me?” It came off as cold and unconcerned, as though I had interrupted his day. He examined my breast. He stated “It’s breast tissue. Men have breast tissue.” Then he said, “I guess I’ll have to order some tests.”

I did switch to a different doctor right away. The biopsy was no fun. The device made a sound like a staple gun while withdrawing the tissue. The mammogram was interesting. I was a 50 something guy who doesn’t work out at the gym so there wasn’t much to work with. But believe me… they can definitely do mammograms on men. I felt no embarrassment or shame at having to be in an office with only women; I actually felt special. I was the only man there and I had a procedure that mostly women get but not many men do.

The day my wife sat me down to tell me the result I did not cry. I was not hysterical. I kept myself together for my wife’s sake and she did not cry. She wanted to but only because she was sad I had to go through this. But I was strong. The surgery was easy. The woke up with a drain tube wondering when I am going to feel pain from the surgery which never happened.

From the moment I discovered my swollen breast tissue to the last radiation treatment I was not scared. I never was depressed. I never said, “Why me?” I did not will it away but I was so sure I had caught it early I was certain the outcome would be good.

After my two experiences with male breast cancer, I’ve made an effort to educate men about this disease

I have joined a Facebook page for “The Male Breast Cancer Coalition.” It includes stories of men and them dealing with breast cancer. It is terrific organization. They sent me a men’s breast cancer T-shirt. I wear it every day and switch off with a shirt I had made with my own mantra, “Breast Cancer — Men Get It Too.”

I was sent stickers that are imprinted “Men Get Breast Cancer.” It sounds crazy but I have taped them to public urinals at every store that I shopped at. I wear my t-shirts and push them in people’s faces and tell them I am a two time breast cancer survivor. I talk to people I see when I’m out and about. I’m don’t think I am annoying; I like to think I am passionate. I tell everyone guys check yourself and to the women be sure the men in your life do the same. I told my story on my Facebook. I don’t usually do personal things, but I did this.

The funny moments in handling male breast cancer for me started when I returned to work and my friend said, “I heard you lost a moob. How are you doing?” From that point forward it was easier to see the humor in it. After a full mastectomy, I told my my friends, “Summer’s coming and I’ll be out on the beach. My shirt WILL be off. See you there!”

Another funny moment was a guy at work posting pictures of his knee surgery staples. I said, “If you can do that, then here’s my scar.” I posted a selfie of me with my radiated nonexistent breast and a screwed-up, pained expression. I killed it.

Men need to know that they can get breast cancer

Every man needs to check themselves frequently as we should our testicles against testicular cancer.

How to do a Male Breast Self-Exam (via verywellhealth.com)

1. Run a warm shower or bath. Use soap or bath gel to create a soapy, slippery layer over your breast area. Well-soaped skin will be easier to examine, as it allows your fingers to slide along your skin without rubbing.

2. Raise your left arm over your head, and if possible, put your left hand on the back of your head. On your right hand, put your index finger, middle finger, and ring finger together as a group. You will use these three fingers to check your left breast. Check the texture of your left breast by starting at the outer edge. Place your three fingers flat onto your skin, press down and move in small circles. Repeat this all around your breast. Don’t rush.

3. Check your nipple by gently squeezing it between your index and ring fingers. Look for any discharge, puckering, or retraction (pulling inward).

4. Check the other breast.

5. Rinse yourself off and dry with a towel. Stand before a mirror which is large enough for you to see both breasts. Take note of any asymmetry and skin changes (rash, puckers, dimples).

Check yourself on a regular basis for any lumps. You don’t want to be the 1 in 2,500 guys who will be diagnosed. Get your physical every year. If you feel a lump or something not right don’t ignore it. Go to the doctor. There is no shame in having breast cancer. It’s not a woman’s disease. It’s a human disease.

As a man with male breast cancer, I’m driven to make others comfortable with me as a person with cancer

No one wants to talk about it. On my Facebook page I told everyone. If you want to ask me what my cancer, please do. I will try not to bore the heck out of you. If you don’t want to ask that’s okay too. Don’t be uncomfortable around me. I’m still the same guy as I have always been.

People need to know it’s ok to talk about cancer. It’s tough. When I discovered my cancer was positive, I called my job, where I had worked 22 1/2 years as a correctional officer. I told my Sergeant that I have breast cancer and I am having surgery. I told him to tell my coworkers I had cancer and I would be back. I wanted him to announce it in roll call so they would know so they wouldn’t worry or wonder.

Men are afraid of sharing feelings or talking about them for the most part. There is stigma attached to illness mental or certainly men’s breast cancer. All I have read of male breast cancer stories is the shame and embarrassment they felt. Many of them had an obvious symptom that was ignored. Mine is a different take because I caught it extremely early. I had symptoms and I got it taken care of.

In a decade, I believe our awareness of male breast cancer and men’s health will be tenfold or more from where it is now because of folks like Brett Miller of The Male Breast Cancer Coalition, your work with A Ballsy Sense of Tumor, and me, taping stickers in men’s rooms, wearing my shirts, and telling everyone wherever I go.