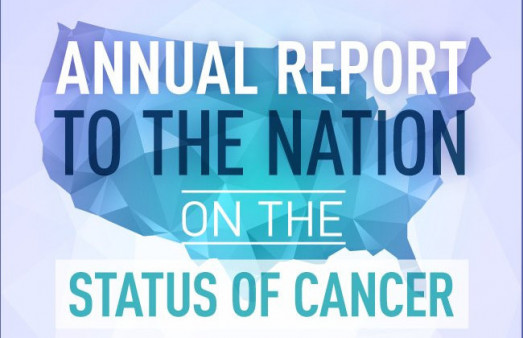 Annual report shows a drop in cancer deaths among men, women and children in all racial and ethnic groups.

The latest Annual Report to the Nation on the Status of Cancer finds that overall cancer death rates continue to decline in men, women, and children in the United States in all major racial and ethnic groups. Overall cancer incidence, or rates of new cancers, decreased in men and were stable in women from 1999 to 2014. In a companion study, researchers reported that there has been an increase in incidence of late-stage prostate cancer and that after decades of decline, prostate cancer mortality has stabilized.

The annual report is a collaborative effort between the National Cancer Institute (NCI), part of the National Institutes of Health; the Centers for Disease Control and Prevention (CDC); the American Cancer Society; and the North American Association of Central Cancer Registries (NAACCR). The studies appeared online in Cancer on May 22, 2018.

“This year’s report is an encouraging indicator of progress we’re making in cancer research. As overall death rates continue to decline for all major racial and ethnic groups in the United States, it’s clear that interventions are having an impact,” said NCI Director Ned Sharpless, MD. “The report also highlights areas where more work is needed. With steadfast commitment to patients and their families, we will be able to lower the mortality rates faster and improve the lives of those affected by cancer.”

This study also reports a decline in recent prostate-specific antigen (PSA) screening in the population based on a series of national surveys. The reported decline in screening occurred between the 2010 and 2013 surveys, for men between 50 and 74 years of age, and after the 2008 survey, for men age 75 and older.

“The increase in late-stage disease and the flattening of the mortality trend occurred contemporaneously with the observed decrease in PSA screening in the population,” said Serban Negoita, MD, DrPH, of NCI’s Surveillance Research Program and lead author of the prostate cancer report. “Although suggestive, this observation does not demonstrate that one caused the other, as there are many factors that contribute to incidence and mortality, such as improvements in staging and treating cancer. Additional research is needed to get a more comprehensive understanding of the recent trends and the possible relationship with PSA screening, as well as the relationship with other factors that may be associated with these trends.”

Findings in the first part of the report show that incidence and death rates for all types of cancer combined were higher in men than in women in every racial and ethnic group. For all cancer sites combined, black men and white women had the highest incidence rates compared to other racial groups, and black men and black women had the highest death rates compared to other racial groups. Non-Hispanic men and women had higher incidence and death rates than those of Hispanic ethnicity.

“There continue to be significant declines in the cancer death rate with significant differences in rate by sex, race, and ethnicity,” said Otis W. Brawley, MD, chief medical officer for ACS. “We need to continue working to understand the reasons for the disparities and how to most efficiently continue supporting and, if possible, accelerate these declines.”

The report also describes five-year survival during 2007-2013 by cancer stage at diagnosis for four of the most common cancers—female breast cancer, colorectal cancer, lung and bronchus cancer, and melanoma of the skin. While five-year survival is high for early-stage disease for breast cancer, colorectal cancer, and melanoma, survival remains low for all stages of lung cancer, ranging from 55 percent for Stage I to 4 percent for Stage IV.

“This report underscores that if cancer is caught early, when it has the best chance of being treated, patients can live longer,” said CDC Director Robert R. Redfield, MD. “Early detection and timely, quality treatment are keys to saving lives.”

Increases in death rates for several cancers continue to cause concern. Researchers suggest that the increase in liver cancer death rates is related to the high prevalence of hepatitis C virus infection among Baby Boomers, as well as to the high prevalence of obesity in the United States. Obesity is also thought to have contributed to the increase in death rates from cancers of the uterus and pancreas. The recent increase in oral cavity and pharynx cancer death rates among white men is thought to be associated with human papillomavirus infection.

“It’s encouraging to see progress in decreasing death rates for many types of cancer,” said Betsy A. Kohler, executive director, NAACCR. “Yet the fact that death rates from several cancers are still on the rise means we need to keep working to find strategies to encourage prevention and continue to make improvements in screening and treatment.”

To view the full report, see:

For more about the report, see:

This press release was originally published on the National Cancer Institute website on May 22, 2018.