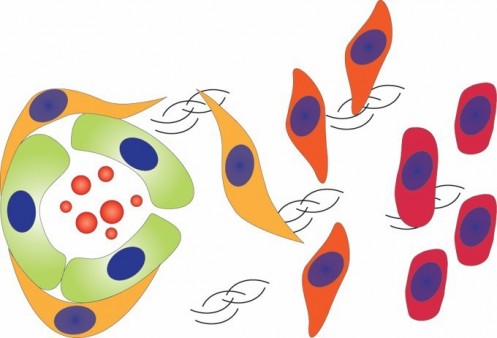 Overcoming the Challenges of Metastatic Cancer: An Interview With Rosandra Kaplan, MD

Though cancer initially starts in one location, it can spread, or metastasize, to other parts of the body. Metastatic cancer is notoriously difficult to treat, and it accounts for most cancer deaths.

In this interview, Rosandra Kaplan, MD, head of the Tumor Microenvironment Section in NCI’s Center for Cancer Research, discusses recent trends in metastatic cancer research and new ideas for treating metastatic cancer—including a potential new treatment approach she and her team explored in a preclinical study published September 18 in Nature Medicine.

What are the challenges of treating metastatic cancer?

Treating metastatic cancer, especially when it has spread to several different locations in the body, is an enormous challenge. For all types of cancer, patients with metastatic tumors are often unresponsive to existing therapies, and achieving long-term remission in these patients is far less likely than it is for patients with localized cancer. That is just a given, but we don’t know why.

Another thing is that each metastatic tumor may be growing in a different organ. This makes treatment a challenge because each tumor may have a unique tumor microenvironment and may respond differently to the treatment.

However, even when researchers use precision medicine to identify genetic changes in a metastatic tumor and select an appropriate targeted therapy, the treatment doesn’t always work. So how the genetic alterations that are identified in metastatic tumors are really driving their growth and survival is not really clear, and I think that’s part of the challenge as well.

Having a better understanding of the genetic and epigenetic changes that develop over time in metastatic tumors will be critical to developing more effective therapies for metastatic cancer.

Are laboratory models of metastasis also a challenge?

Yes, current preclinical models of metastasis have significant limitations. For example, we don’t know if existing mouse models are truly representative of metastatic cancer in humans. But researchers are improving these models, for example, by generating mice that have more human-like immune systems. I think that once we have better models for metastatic cancer, we will develop more-successful therapies.

Another option is studying cancer in dogs because the genetics, biology, and appearance of some human cancers are very much like that of dog cancers. Through NCI’s Comparative Oncology Program researchers treat cats and dogs that have naturally developed cancer with new therapeutics. Not only does this work help pet owners, but it helps scientists get a sense of how the drug might perform in humans.

And dogs are a good model to study metastasis. For example, large dogs sometimes develop a type of bone cancer called osteosarcoma. They are usually treated with limb amputation to remove the primary tumor plus adjuvant therapy to prevent metastasis. So by testing a new therapy on dogs with osteosarcoma we can determine whether the drug prevents metastasis in that setting.

Another challenge is that we don’t always use models of metastatic cancer at the appropriate times. For example, experimental drugs are rarely tested on metastatic cancer models, but then in clinical trials we almost always test drug candidates in patients with metastatic disease.

What are some current approaches for treating metastatic cancer?

One approach is to prevent metastatic cancer instead of treating it after it’s already there. The goal of this approach, called adjuvant or neoadjuvant therapy, is to not only shrink the primary tumor, but also to prevent disseminated tumor cells from forming metastatic tumors later on.

We think that most patients with localized cancer actually already have tumor cells that have spread to distant sites, though they aren’t easily detectable. Those disseminated tumor cells can form metastatic tumors years later, even if the primary tumor is removed or treated.

This idea of preventing metastasis has been around for a long time, but now we are investigating therapies that do this in different ways, such as targeting the tumor microenvironment or the patient’s immune system. We are just beginning to think about these new therapies and the best way to give them to patients.

What new strategies for preventing metastasis are being explored?

I think we can learn about potential strategies for preventing metastasis by studying patients with localized cancer who are treated with adjuvant or neoadjuvant therapy and who do not go on to have metastatic disease. Did these patients not have disseminated cancer cells? Or did they have disseminated cancer cells that didn’t grow? If the latter is true, did some unique aspect of the patient’s biology, such as their immune system, prevent metastatic tumor growth?

Another strategy to prevent metastasis is by blocking the development of pre-metastatic niches or targeting the cells and molecules that help disseminated tumor cells survive and grow.

What is the pre-metastatic niche, and how does it relate to metastatic cancer?

Primary tumors secrete signals that travel through the bloodstream and have effects on healthy cells and molecules at distant sites in the body. These signals prompt the cells and molecules at the distant site to create an environment that will support cancer cell growth and survival when cancer cells arrive there. This area, called the pre-metastatic niche, is very important for determining the fate of disseminated cancer cells.

It’s almost like the cancer cells call ahead to reserve a hotel room before they get to their new location.

When I first presented evidence of the pre-metastatic niche in 2005, many researchers did not believe it. But since then there has been a shift and now it is very well accepted. There’s actually a whole field of research dedicated to studying it, and I organized a one-day symposium in March focused solely on the metastatic niche.

Did any major trends in metastatic cancer research emerge at the symposium?

Despite the enormous challenges of studying and treating metastatic cancer, the level of enthusiasm at the meeting was tremendous. It was surprising and also exciting.

One trend that came out at the meeting is how complex the interactions are between metastatic tumor cells and components of the tumor microenvironment. There was a lot of interest in the crosstalk between cells and other components in the tumor microenvironment. By studying this crosstalk we can eavesdrop on their communication, which is critical to understanding tumor behavior and thinking about how we can potentially prevent or treat metastatic cancer.

There was also a lot of enthusiasm about bringing together scientists with expertise in different areas of cancer research. It is becoming more evident that, with cancer, all different types of cells and molecules are in constant communication and have complex relationships with one another.

So there’s a surge of interest in studying cancer in context, meaning in relation to all the other cells, factors, and systems in the body. It makes our research work more complicated, but I think it will lead to more effective therapies in the end. It’s clear that a whack-a-mole approach where you only knock one thing down isn’t going to work, because another thing will just pop up.

Another general trend in metastatic cancer research that has recently emerged is the ability of cancer cells to change their phenotype, like an identify shift. We refer to this as cell plasticity, and cancer cells have remarkable plasticity. They take advantage of mechanisms that healthy cells use for development or wound healing, for example, and use them to adapt to their environment. This ability is essential for the tumor to successfully grow and spread.

We also know that cells in the tumor microenvironment and in the pre-metastatic niche also have plasticity, and that, in some cases, their plasticity supports cancer growth.

You recently conducted a study of cell behavior in the pre-metastatic niche. What were your findings?

We found that a gene called Klf4 causes a phenotype switch in perivascular cells in mice that promotes metastasis of melanoma, breast cancer, and pediatric rhabdomyosarcoma tumors.

Perivascular cells are a small population of cells that sit in between blood vessel walls and the surrounding tissue. They are important for sensing stress or injury around blood vessels and giving instructions to other cells to help repair the injury. Because tumors send signals to the pre-metastatic niche through blood vessels, we reasoned that these signals likely pass by perivascular cells and wanted to know if these cells have a role in establishing the pre-metastatic niche.

This phenotype switch is dependent on Klf4, a transcription factor important for perivascular cell plasticity, and we showed that eliminating Klf4 in the perivascular cells of mice dramatically decreases metastasis of breast carcinoma, melanoma and pediatric rhabdomyosarcoma tumors.

This article was originally published by the National Cancer Institute. It is republished with permission.