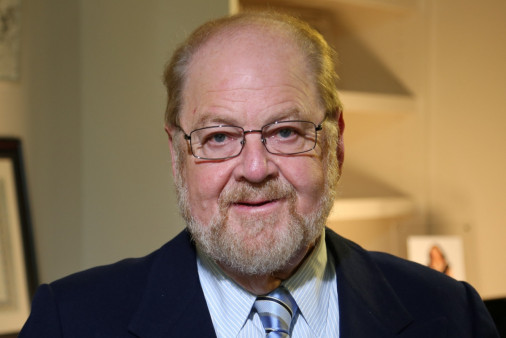 Science is all about risk. If you’re not willing to tolerate failure, you’re not going to succeed in science

James E. Rothman, PhD, received the 2013 Nobel Prize in Physiology or Medicine for work he began as a Damon Runyon Fellow from 1976 to 1978. His work showed how tiny sac-like structures called vesicles help transport substances to different places inside the cell and send molecules from the cell’s surface as signals to other cells in the body.

Was there a breakthrough moment in your research?

What role did Damon Runyon play in your career?

What fellowships like the Damon Runyon do, is they provide young scientists, whether they’re newly independent scientists, or post-doctoral fellows, opportunities to exert their freedom that they might not otherwise have. In my day it would be normal to have a two or a three-year fellowship after graduate school and one would have a paper or two and one’s capabilities would be recognized hopefully. Today, that’s more difficult, it typically takes four, five or even six years and funding that can result in additional funding for longer periods of time and therefore more freedom to achieve is all the more vital and the Damon Runyon in various ways provides that. So, the mission of Damon Runyon is not less important, it’s actually far more important than ever.

Why is the Damon Runyon fellowship far more important than ever?

Explain the importance of risk in scientific research.

What are the consequences of not funding these scientists?

If we do nothing to correct it as a society, we will gradually lose our competitiveness. I don’t mean just competitiveness in science, but competitiveness in medicine, competitiveness in the associated industries, it’s not a good direction to be in. For example, I have a post-doctoral fellow, extremely talented, who’s in his, all together probably fourth year of his post doc, got approached by Google, actually as a computer programmer. He had doubts about whether he should stay in science. Fortunately, I was able to convince him and in the last year he now has two fabulous papers that are going to come out, but it was really touch and go and what did he have to offer Google? Well he knew how to program computers and he was smart. That’s where the young people are going these days, they’re going into technologies that are not medical research, they’re going into the financial industries, they’re going into many things.

What is the importance of patience and urgency in science?

It’s only by having a sense of patience that we can tolerate the high failure rate that necessarily accompanies and is indeed the, as I’ve mentioned several times already, the ability to tolerate a high failure is an essential ingredient. So, without patience you can’t tolerate failure, without urgency you don’t go to bat over and over again. So, they’re both essential characteristics.

You’ve also warned young scientists never to listen to an old scientist. Why?

Someone like myself was raised in a scientific milieu and stew, a kind of, a scientific atmosphere where the questions and the way of answering questions, that I learned and that I accommodated to and I developed were from 30, 40, 50 years ago. They were very relevant then and the approaches that I or people of my generation took, that’s the reason why you have questions to ask today. Now, if I took my mentality and I applied it today, you wouldn’t really be very successful because it’s the people who ask the unconventional questions, who think in a different way, that actually own the world today.