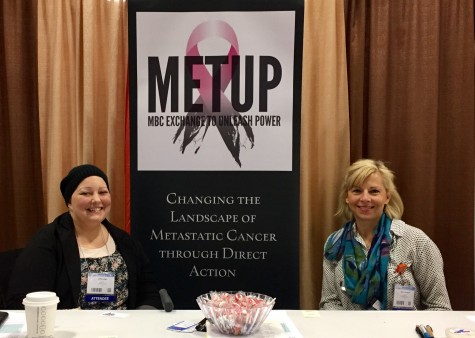 Activists and Advocates at #SABCS17

Having gotten into medical journalism through HIV/AIDS activism, a highlight of the San Antonio Breast Cancer Symposium for me was meeting some of the activists and advocates in the breast cancer community.

METUP (MBC Exchange to Unleash Power) (@METUPorg) is a direct action group for people with metastatic breast cancer—though they aim to expand to other types of metastatic cancer as well—modeled after the AIDS activist group ACT UP. One of their issues is how the “pink ribbon industry” glosses over people with advanced disease who will not become breast cancer survivors, given the current available treatment options.

METUP demands more research on treatment of advanced cancer, as well as expanded access to experimental therapies. Founded in 2015, the group has done die-ins before Congress in Washington, DC, and at the Liberty Bell in Philadelphia. In an interesting twist, one of the things they’re fighting for is access to clinical trials for men with breast cancer, just as AIDS activists had to fight for inclusion of women.

“Life with metastatic breast cancer involves ongoing treatments for the rest of our shortened lives. There is nothing fun or pink about our experience.”

Check out METUP’s website to learn more about the group’s history and mission. Click here for an article about the links between metastatic breast cancer activism and AIDS activism from METUP cofounder Jennie Grimes. Click here for a remembrance of cofounder Beth Caldwell, who died in early November (via Fred Hutchinson Cancer Research Center). 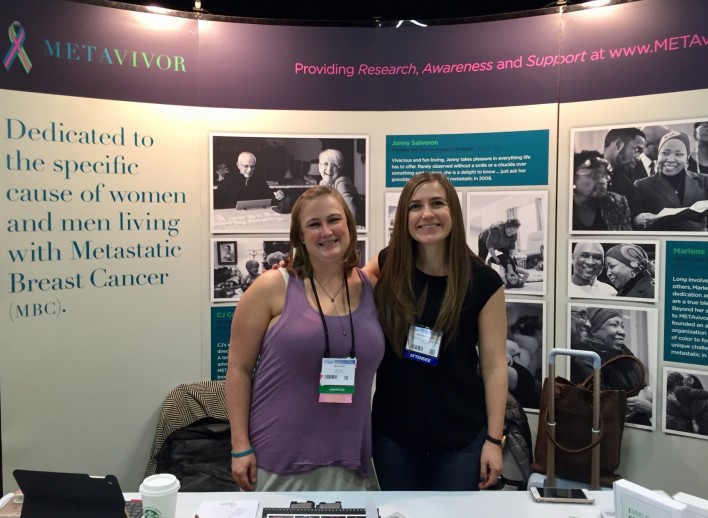 Metavivor (@METAvivor) is a non-profit group dedicated to metastatic breast cancer awareness, research and support. This group leans more toward the former side of the “at the table and in the streets” activist equation, aiming to cultivate a nationwide network of grassroots advocates to pressure elected officials. Metavivor’s legislative agenda includes increasing National Institutes of Health research funding for metastatic cancer, expanding access to potentially life-saving new treatments and ending the waiting period for disability benefits for people with terminal illness.

The Metastatic Breast Cancer Project (@MBC_Project), started by the Broad Institute and Dana Farber Cancer Center, aims to directly involve people living with cancer in research to find better treatments. The project encourages people with metastatic breast cancer to share their medical records, stored tumor tissue samples and DNA samples (obtained with a do-it-yourself kit). The collected data is made publicly available, with the hope that a larger database will speed up advances in the understanding and treatment of the disease.