A Special Moment Within An Unfortunate Situation

It’s thrilling to be featured in a significant article about COVID-19’s economic effects, but now I have no job and no health insurance.

It’s not every day one can say they were featured in a major newspaper like the New York Times, but I can. I should be elated and on cloud 500, but instead, I am a mixed bag of emotions. The same day the article was published was also my official last day with the company.

I know I’m one of the many, many millions suddenly out of work and without health insurance due to the COVID-19 pandemic. I was very careful in my language with the reporter. What I couldn’t say is how hurt I am about the way the layoff was handled. It was so cold and dismissive. Considering I worked for a staffing company, there was no offer to help with my resume or job search. It’s their dismissive tone that I can’t seem to get past. It was like those two years I worked there under super stressful circumstances with constant changes in leadership and visions meant nothing. My professional reputation within that company was stellar. 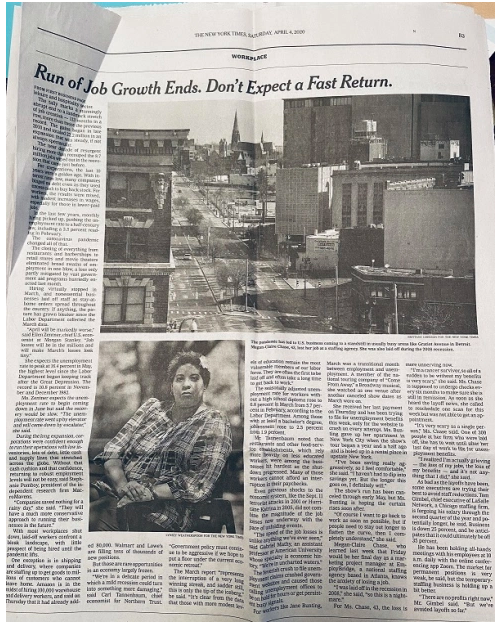 What you don’t know about the picture above is it was taken in the courtyard of where I used to work. Since the parks were closed, and the New York Times photographer needed to keep six feet away from me for social distancing, I suggested the courtyard because it’s the one thing that always brought me peace during stressful times. I was able in my own way say goodbye, which is what the company tried to strip me and others of doing.

So, as thrilling as it is to be featured in a significant article and be part of COVID-19 economic history, I’m deeply depressed because there was no way to prepare for such another tough financial hit. I grow so tired of being told to “stay positive” and “you’ll get another job in no time.” These are dire times for those who are professionals and those who are hourly workers because it’s ALL industries that have taken a hit to their bottom line and not just a select few. That’s why it’s so scary and uncertain. How does one stand out from the crowd when not many companies are hiring right now or in a hiring freeze?

I’ve been talking and emailing with recruiters all week. They tell me to keep applying for positions, but they aren’t receiving many job openings. I do have one promising lead, so I pray it turns into an interview and ultimately a job offer. I’ve been networking like crazy as well.

Of course, the other issue is health insurance. To just have it ripped away with only a week to try and get medications refilled and scramble to get my breast cancer scans rescheduled before my last day with the company caused pure panic. It truly was a miracle that I was able to get both the bilateral breast MRI and diagnostic mammogram rescheduled for the same day. I had walked in there last Wednesday with only the MRI officially scheduled. The schedulers said they couldn’t fit my diagnostic mammogram just the day before. So, when I expressed my anxiety and disappointment with the MRI nurse, she told me to sit tight and would see what she could do. I was there five hours but didn’t care.

The company I now used to work for didn’t think about those whose lives depend on health insurance. I had to cancel my second epidural spinal steroid injection because they couldn’t fit me last week. That’s why I mentioned I am a breast cancer survivor and how the added stress of losing my insurance was affecting me to the reporter as well. I’m currently lacking motivation to apply for the marketplace insurance, even though I have a dear friend who has generously offered to help with the application.

Though I have much to celebrate – officially 4 years NED and the article – I’m more depressed now than angry this week. My sleep cycle is completely off. I’ve had a few stress headaches and more intense fibromyalgia flare ups. My back pain makes sitting, sleeping and walking feel impossible.

I was really hoping 2020 would be a better year. This is not a relaxing time. I still have hope for better days ahead. So, I am extending grace with myself and feeling everything I need to in order to move past it and get motivated again.

This post originally appeared on Life on the Cancer Train on April 11, 2020. It is republished with permission.

Some Older Breast Cancer Survivors Do Not Need Routine Mammography