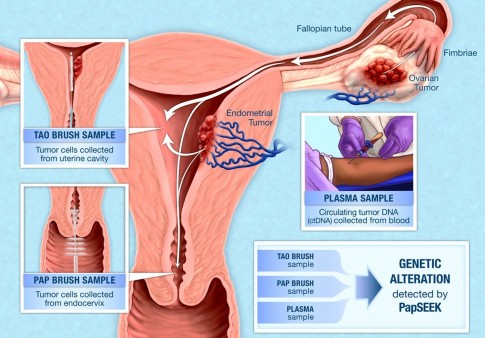 Researchers have shown that an experimental screening test can detect some endometrial and ovarian cancers at their early, more treatable stages. The test, called PapSEEK, is a type of liquid biopsy that identifies cancer-related alterations in DNA obtained from fluids collected during a routine Pap test.

In the NCI-funded study, which used Pap test samples from women already diagnosed with cancer, PapSEEK correctly identified most women with endometrial cancer and one-third of women with ovarian cancer. The test’s ability to accurately identify cancer (its sensitivity) improved when the researchers also tested DNA collected from blood and other tissues.

Sudhir Srivastava, PhD, MPH, of NCI’s Division of Cancer Prevention, called the findings “a good start” for developing an effective screening test for early-stage endometrial and ovarian cancer. “This lays the foundation for future studies,” added Srivastava, who was not involved in the study.

The retrospective study was published March 21 in Science Translational Medicine. Additional prospective studies are needed to determine whether PapSEEK can correctly identify women with cancer who have not yet been diagnosed, the investigators noted.

Screening for Ovarian and Endometrial Cancers

For many years, researchers have strived to develop a feasible and reliable way to detect early-stage endometrial and ovarian cancers in women who do not have any symptoms. To date, there is no clinically validated biomarker for either cancer type that can be detected noninvasively.

But in an earlier study, Nickolas Papadopoulos, PhD, of Johns Hopkins University School of Medicine, and his colleagues found that they could detect trace amounts of DNA from endometrial and ovarian cancers in Pap test samples. For a Pap test, an instrument called a Pap brush is used to scrape the surface of the cervix to collect a sample of cells and DNA. While most of this DNA comes from cervical cells, endometrial and ovarian tumors also shed DNA that can reach the cervix.

Building on these findings, the research team developed PapSEEK, a test that analyzes Pap test samples for certain DNA mutations that are commonly found in endometrial and ovarian cancers. The test also detects aneuploidy, a genetic alteration associated with cancer in which cells have an abnormal number of chromosomes.

In addition, PapSEEK gave only 1.4 percent of women without cancer a false-positive test result, showing that “the specificity of PapSEEK was high,” the researchers wrote.

To increase the test’s sensitivity, the investigators decided to test samples taken from a location that is closer to the site of endometrial and ovarian cancers. They analyzed fluid samples collected from the lining of the uterus using an instrument called a Tao brush, which is approved by the Food and Drug Administration as a tool to diagnose endometrial cancer.

No cancer-related alterations were detected in any of the Tao samples collected from women without cancer—an “ideal” characteristic for a screening test, Srivastava noted.

Testing Tao samples may have provided greater sensitivity for detecting ovarian and endometrial cancer than testing Pap samples because these tumors are located closer to the uterus than the cervix, Papadopoulos noted. Indeed, the researchers found that Tao samples contained more endometrial and ovarian tumor DNA than Pap samples, he explained.

Tumors can also shed DNA and tumor cells into the bloodstream. When the researchers tested blood samples from women with ovarian cancer, the sensitivity of PapSEEK was 43 percent. Combining PapSEEK results from blood and Pap samples from the same woman, however, increased the test’s sensitivity to 63 percent.

There are likely several reasons why the sensitivity of PapSEEK was lower, across the board, for ovarian cancer than for endometrial cancer, Papadopoulos said.

Another potential issue is that not every tumor sheds DNA into certain body fluids. When the investigators measured the amount of tumor DNA in Pap and Tao samples, they found comparatively more DNA from endometrial tumors than from ovarian tumors, Papadopoulos explained. This could be due to the location (ovarian cancers are further away from the site where Pap and Tao brush sampling are performed) or the biology of ovarian tumors, he added.

Overall, Papadopoulos said, “I think a shift in thinking needs to happen. A screening test with less than 100 percent sensitivity does not make the test useless. The important thing is to try to catch cancer early to reduce the number of people who may unknowingly have cancer and are doing nothing about it until it is too late.”

While Srivastava agreed that a screening test for ovarian cancer is much needed, a test with low sensitivity “means you miss out on catching cancer,” he noted. And false-positive results “can bring undue burden—physical, psychological, and financial burdens from the additional testing that is triggered. That’s something that needs to be taken into consideration,” he added, though PapSEEK produced very few false-positive results.

Not Reinventing the Wheel

While more studies of the PapSEEK test are needed before it can be considered for patient care, it does have several theoretical advantages for potential clinical use, Papadopoulos explained. For example, it is inexpensive, noninvasive, and easily administered.

“Women already go for Pap smears. We’re using the same material, so we’re not introducing a new type of exam,” he added. “We didn’t want to invent a new device or approach for [sample] collection.”

The PapSEEK test is potentially “very doable and amenable to clinical use,” Srivastava noted. “It could be performed at the same time women undergo a Pap test for cervical cancer.”

The investigators are continuing to explore whether combining PapSEEK results from different body fluids increases the test’s sensitivity for ovarian cancer.

Papadopoulos and his colleagues have also developed another liquid biopsy test, called CancerSEEK, that scans blood samples for a combination of genetic mutations and proteins that occur in eight different types of cancer.

In a similar retrospective study, CancerSEEK had 98 percent sensitivity for ovarian cancer, with a false-positive rate of less than 1 percent. As with PapSEEK, additional prospective studies are needed to determine whether CancerSEEK can identify cancer in asymptomatic people.

This post was originally published on May 2, 2018, by the National Cancer Institute. It is republished with permission. 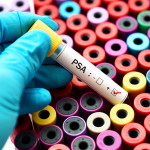