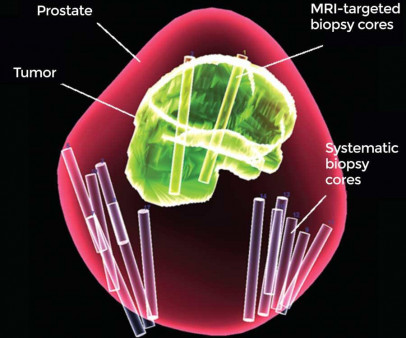 “The change that matters most is how this impacts the people we see every day, for whom we can now make more informed treatment decisions.”

A method of testing for prostate cancer developed at the National Cancer Institute (NCI) leads to more accurate diagnosis and prediction of the course of the disease, according to a large study. This method, which combines systematic biopsy, the current primary diagnostic approach, with MRI-targeted biopsy, is poised to greatly improve prostate cancer diagnosis, thereby reducing the risk of both overtreatment and undertreatment of the disease. NCI is part of the National Institutes of Health.

The findings were published March 5, 2020, in the New England Journal of Medicine. The study was conducted at the NIH Clinical Center in Bethesda, Maryland.

“Prostate cancer has been one of the only solid tumors diagnosed by performing systematic biopsies ‘blind’ to the cancer’s location. For decades this has led to the overdiagnosis and subsequent unnecessary treatment of non-lethal cancers, as well as to missing aggressive high-grade cancers and their opportunity for cure,” said Peter Pinto, MD, of the Urologic Oncology Branch in NCI’s Center for Cancer Research and senior author of the study. “With the addition of MRI-targeted biopsy to systematic biopsy, we can now identify the most lethal cancers within the prostate earlier, providing patients the potential for better treatment before the cancers spread.”

Prostate cancer can vary widely in severity and its potential to spread. Low-grade prostate cancer is associated with a very low risk of cancer-specific death and often doesn’t require treatment, whereas high-grade cancers are much more likely to spread and are responsible for most prostate cancer deaths. This makes the correct assessment of the cancer grade very important for treatment decisions.

Unlike biopsies for most other types of cancer, which target abnormalities found by imaging, systematic biopsy uses a non-targeted method of taking systematically spaced samples across the prostate gland to find a cancer. Because this method can potentially miss areas of cancer, doctors may then overtreat a patient with low-grade disease, fearing there is high-grade disease they missed. Or, if an aggressive cancer is missed, a patient may be undertreated.

MRI-targeted biopsies were first developed more than 10 years ago by a team of NCI researchers led by \Pinto; Bradford Wood, MD; Baris Turkbey, MD; and Peter Choyke, MD, all co-authors of the new study. The team, which included other researchers from NCI and other organizations, worked with Philips Healthcare to develop software that could overlay MRI images onto ultrasound images in real time, providing a view of lesions to be sampled that’s not possible with systematic biopsy.

“Seeing this technology really make a difference in how we diagnose and treat prostate cancer is validation of the work we have done and continue to do at NIH,” said Pinto. “But the change that matters most to us is how this impacts the patients we see every day, for whom we can now make more informed treatment decisions.”

This announcement was originally published by the National Cancer Institute. It is republished with permission.