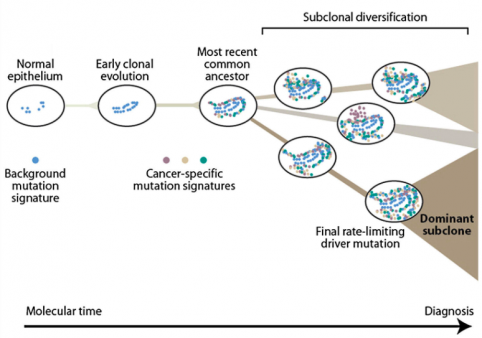 The maps may create opportunities to identify cancers much earlier than is currently possible, the study leaders believe.

A single genetic alteration is rarely enough to turn a cell cancerous. In most cases, incremental damage to the DNA of a cell and the cells that arise from it builds up over years or decades, to the point where those cells gain the ability to grow unchecked—or, in the case of metastatic cancer, to spread to other parts of the body.

For a few cancer types, such as colon cancer, scientists have mapped out the alterations that are commonly seen early, in the middle of, and late in cancer development. But how long it takes for these alterations to develop has been unclear. And maps charting this genomic evolution over time have been unavailable for most types of cancer.

In a new international study, researchers used whole-genome sequencing to map the alterations that most frequently drive 38 cancer types. The study, which was published February 6 in Nature, was also able to pinpoint when many of these alterations occurred, both relative to each other and chronologically, over years or decades. The resulting maps may create opportunities to identify cancers much earlier than is currently possible, the study leaders believe.

“Now, we have the order of these [mutational] events, and that’s something we mostly haven’t had previously,” said Paul Spellman, PhD, from Oregon Health & Science University, an investigator on the study.

For some tumor types, such as glioblastoma, cancer-causing alterations occurred very early, even during fetal development, the researchers found. For others, such as ovarian cancer, this lead time was on the order of a decade before symptoms developed—much earlier than previously thought.

Researchers don’t completely understand how the body keeps these potentially cancerous cells in check for so long, explained Spellman.

“But many of the [alterations] we care about are happening quite a long time before diagnosis,” Spellman said. “So there are possibilities for interventions for individuals who are at risk, if we can figure out ways to identify those people and what we should be looking for [in terms of] of early detection markers.”

A Diversity of Mutations

The new work came out of a collaborative project from the Pan-Cancer Analysis of Whole Genomes (PCAWG) Consortium. The PCAWG pooled cancer tissue samples collected by The Cancer Genome Atlas (TCGA) program and the International Cancer Genome Consortium. Between the two collections, the researchers had access to 2,778 cancer samples taken from 2,658 donors.

Using whole-genome sequences from each sample, the researchers were able to analyze the alterations that had occurred during the development of that tumor. Alterations found in many cells in a single tumor were considered to have been earlier changes that had then been passed on as the cells that gave rise to the tumor divided. Alterations found in only a small number of tumor cells in a sample were considered to have likely occurred later in a cancer’s evolution.

“Genomic analysis of tumors is sometimes referred to as molecular archaeology,” said Jerry Li, MD, PhD, of NCI’s Division of Cancer Biology, who was not involved with the study. “It may not have the precision of carbon dating like in archeology, but it can give you the relative order [in which alterations happen].”

For about 2,100 of the samples, the researchers were able to determine the molecular timing of many alterations in relationship to each other. For alterations involving copy-number gains—where parts of a chromosome, including entire genes, are duplicated—the timing varied by cancer type, they reported.

For some brain tumors, such as glioblastoma and medulloblastoma, copy-number gains associated with cancer development occurred very early in molecular time. In contrast, for cancers such as lung cancer, kidney cancer, and melanoma, the researchers saw copy-number gains developing toward the end of carcinogenesis.

The research team also analyzed the timing of point mutations—alterations in a single base of DNA in a single gene. Driver mutations in cancer-related genes (which promote the development and spread of tumors), including TP53 and KRAS, were very likely to occur early in cancer development, regardless of cancer type.

Signatures of Exposure and Risk
Some kinds of damage to the genome—such as the harm caused by exposure to certain types of carcinogens—leave behind sets of specific, characteristic mutations, called mutational signatures. In about 40% of the samples they analyzed, the researchers saw these signatures change over the course of a tumor’s evolution.

“We could actually show the mutagenic processes associated with smoking in play during tumor development,” said Spellman.

Tracking a specific type of mutation, called a CpG-to-TpG mutation, allowed the researchers to map the amount of chronological time it took for some cancer types to develop. Several cancer types studied showed a long time lag between when mutations in driver genes arose and when cancer was diagnosed—a period called cancer latency. For example, this latency was more than a decade for ovarian cancer, which is often diagnosed at a late stage.

“These timing maps give us some confidence that there’s actually something to go for,” in terms of early detection for some cancer types, said Spellman. “And in some cases, it might even tell us what to go for.” For example, he explained, plausible strategies exist to look for copy-number gains using molecular imaging methods that use radioactive tracers or other tools to find cells with specific features. However, testing such strategies is a concept that remains far in the future for now.

The Future of Sequencing
“Potentially, these kind of systematic analyses of tumors will provide new clues that will lead to new [methods] of diagnosing cancer and predicting prognosis,” said Li.

The study was part of a larger effort that resulted in more than 20 simultaneously published papers. The overall project highlights the increasing importance of whole-genome sequencing to all aspects of cancer medicine, said Lou Staudt, MD, PhD, director of NCI’s Office of Cancer Genomics.

“In addition to what we knew about a specific set of relatively high frequency alterations, we’ve been able to put a lot of context on less common alterations, and different types of alterations and aberrations that happen during tumor development in a way that hasn’t been possible to do before,” Spellman said.

Future work is needed to build on these results and answer questions such as how exposure to certain carcinogens drives cancer development, explained Spellman. “But it’s really exciting that we can look at the spectra of alterations over time and start to track causality associated with specific mutagenic processes,” he said. “It might now be plausible to show differential exposures to differential particular carcinogens, acting at specific times that we know those exposures were in play, and time those alterations and show those alterations in an evolved tumor [as] a consequence.”