Toward the Next Generation of CAR-T Therapies for Cancer

Chimeric antigen receptor (CAR) T cell therapy, in which a patient’s own immune cells are genetically engineered to target cancer cells, has revolutionized the treatment of certain blood cancers. Unfortunately, CAR T cell therapy is much less effective against solid tumors, such as pancreatic or skin cancer. Part of the problem in these cases is that the genetically altered T cells quickly become dysfunctional; even those that exhibit a strong anti-tumor response at first soon reach a state of exhaustion. At the University of California, Los Angeles, Damon Runyon Clinical Investigator Anusha Kalbasi, MD, and his colleagues are investigating how to make these T cells last longer to better treat melanoma and other deadly solid tumors. Recently, they had a breakthrough.

Cytokines are small proteins that serve as cellular messengers—when released in response to an oncoming pathogen, they tell immune cells to spring into action. This makes them especially useful in immunotherapy, triggering an immune response in patients whose cancer cells have evaded T cell attack. Equipping CAR T cells with synthetic cytokine receptors could be a way to keep them active and fighting cancer longer. But there is a problem: because many kinds of immune cells have cytokine receptors, flooding the body with cytokines can result in a dangerously overzealous immune response.

Consider the robot vacuum Roomba, which is activated when dust particles hit a sensor on its surface. Eventually, these sensors get covered with dust and the vacuum stops working. A solution might be to add more sensors. But dust is everywhere, and you might not want the Roomba crawling up your walls. You want it to focus instead on cleaning a specific mess. What if you could add a sensor that only detected the substance you want cleaned up? 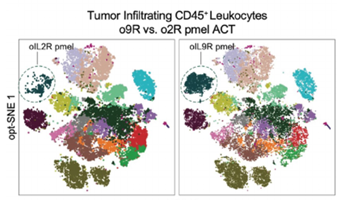 This is, in effect, what Dr. Kalbasi and his team have done with CAR T cells. They have outfitted T cells with a mutant form of the cytokine receptor, known as an orthogonal cytokine receptor, that only binds to a specific mutant cytokine. After testing several different mutant cytokine-receptor pairs, the team found that a pair called o9R consistently produced the strongest anti-tumor response. O9R T cells were seen to be effective against two recalcitrant solid tumors: melanoma and pancreatic cancer.

This exciting discovery offers hope that, thanks to extensive research efforts by Dr. Kalbasi and others, the next generation of CAR T therapies are indeed on their way, bringing a new treatment option to the widest range of patients yet.

This research was published in Nature.