Tobacco companies are court-ordered to admit the health risks of smoking that they’ve been concealing from the public for decades. Campaign for Tobacco-Free Kids

US Tobacco Companies Tell the Truth About Addictive Products

In her ruling, judge Gladys Kessler found that “[Ov]er the course of more than 50 years, defendants lied, misrepresented, and deceived the American public.”

November 26, 2017, marked a unique moment in the history of public health in the United States. On this day, in major newspapers (online and print), the three major US tobacco companies issued the first in what will be a series of five “corrective statements” about their products.

Over the next year, the same statements will also run as TV spots during prime-time viewing hours.

Stemming from a 17-year legal battle, these court-ordered statements—which cover five different topic areas—will explain in plain language the reality of the harms inflicted by tobacco products and address many common misconceptions about cigarettes. 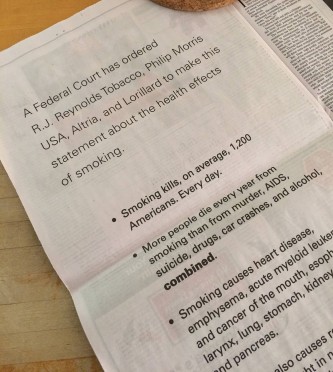 With the appeals finally resolved for the time being, the statements have now begun to appear.

And it’s safe to say that, as one of the largest supporters of research on the harm of tobacco products as well as on ways to prevent and control tobacco use, NCI made important contributions to this case.

The court-ordered corrective statements are just one component of a judgment entered against the tobacco companies—Altria; its subsidiary Philip Morris USA; R.J. Reynolds Tobacco; and Lorillard, whose brands are now sold by R.J. Reynolds and by ITG Brands.

Six public-health organizations were allowed by the court to join the lawsuit against the tobacco companies as “intervenors.” The intervenor groups include the American Cancer Society, the American Lung Association, the American Heart Association, Tobacco-Free Kids Action Fund, Americans for Nonsmokers’ Rights, and the National African American Tobacco Prevention Network.

The corrective statements are one of four legal remedies included in the judgment to “prevent and restrain” the tobacco companies from continuing their long-standing actions to obscure the truth about the health effects and addictive nature of their products.

As the judge overseeing the case, Gladys Kessler, wrote in her nearly 1,700-page opinion, “Defendants have known many of these facts for at least 50 years or more. Despite that knowledge, they have consistently, repeatedly, and with enormous skill and sophistication, denied these facts to the public, to the Government, and to the public health community.”

Under the court’s judgment, the companies must: 1) publish the corrective statements as full-page ads in at least 50 newspapers across the country, in five issues appearing from late November to early March; and 2) once a week for one year, broadcast them as 30- and 45-second prime-time spots on the major television networks.

This research included findings on tobacco’s harmful health effects, how the tobacco companies manipulate their products to make them more addictive and use marketing and other means to target teens, and on the deadly impact of secondhand smoke exposure.

For example, as Judge Kessler found, over the decades, the tobacco companies crafted and implemented “a broad strategy to undermine and distort the evidence” of secondhand smoke as a health hazard in order “to deceive the public, distort the scientific record, avoid adverse findings by government agencies, and forestall indoor air restrictions.”

An NCI tobacco control monograph used during the trial, however, showed that exposure of nonsmokers to secondhand smoke is associated with serious health problems, including respiratory and cardiovascular conditions, cancer, and developmental effects in babies.

The tobacco companies also have marketed cigarettes with health descriptors such as “light” and “low-tar,” among others, to discourage smokers from quitting, by suggesting that they were safer than conventional cigarettes. NCI-supported research, however, firmly established that using these cigarettes is indeed just as toxic and dangerous as using conventional cigarettes, and Judge Kessler found that, “[as] the National Cancer Institute concluded in Monograph 13, [health] descriptors are inherently deceptive.”

As part of the case, DOJ also asked NCI to evaluate potential wording for the corrective statements, to help provide the court with a scientific foundation for determining how the proposed statements would affect consumers. The research would also determine whether the statements that were tested could have potential unintended consequences, such as “boomerang effects,” which occur when a campaign has the opposite of its intended effect.

The analysis was led by Kelly Blake, Sc.D., of the Division of Cancer Control and Population Sciences’ Behavioral Research Program, and was conducted in 2010-2011 and filed as an Expert Report in the case. Although the court did not rely on Dr. Blake’s report, the research provides a foundation for NCI and extramural researchers to consider how the court-ordered statements will be received by the public.

NCI’s role in this lawsuit is just one small part of our larger and sustained commitment to reducing smoking rates in the United States and beyond.

For example, we are funding research to address the continued high tobacco use rates among people of lower socioeconomic status and certain racial/ethnic groups. This is important because, as explained in the recently published NCI Tobacco Control Monograph, A Socioecological Approach to Addressing Tobacco-Related Health Disparities, research to understand and address tobacco-related health disparities is of increasing importance to reducing the cancer burden in the United States.

We have also launched a new initiative to help smokers who are diagnosed with cancer quit, which studies have shown can improve their outcomes. And we continue to add new resources and tools to our comprehensive smoking cessation website.

These are just some examples of the work we’re doing to drive down rates of tobacco use among youth and adults. And that’s important, because despite our success in dramatically reducing smoking rates over the past several decades, we can’t afford to become complacent: In 2015, 36.5 million American adults (15.1 percent) smoked cigarettes, and so are at high risk of developing cancer and other serious diseases.

As we have seen, tobacco use is an ongoing challenge, but it’s one we’re committed to addressing now and well into the future.

This article, written by Robert Croyle, PhD, and Michele Bloch, MD, PhD, was originally published by the National Cancer Institute on November 28, 2017. It is republished with permission.

Read more of Cancer Health’s coverage of the detrimental effects of smoking and tobacco on the body.